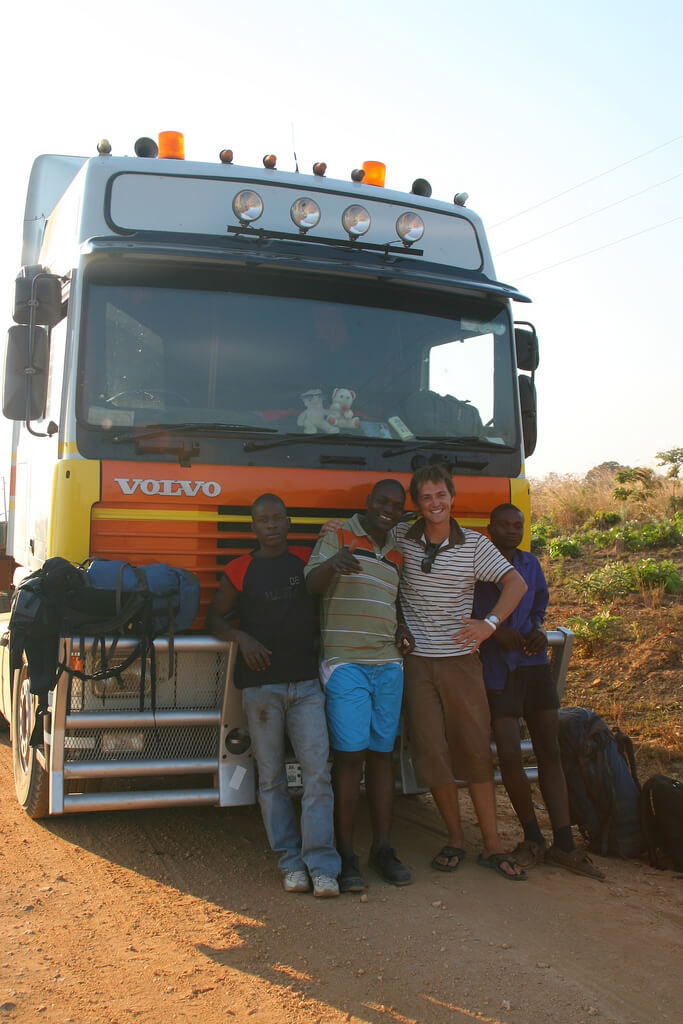 Since the beginning of our trip whenever asked what I have been looking to most I have answered “taking the ferry MV Liemba up Lake Tanganika.” I’m not sure why I picked this, for in reality I’m not sure it was actually the thing I was most excited about (I’m quite sure that is, in fact, Machu Piccu). However, it was something concrete, something soon, and something that not a lot of tourists do.

The Lonely Planet has some very limited information about the boat (that it leaves on Friday afternoon and costs $60 for a first class ticket). The internet doesn’t know much more, and neither do the hostels in Livingstone or Lusaka. If you have come across this blog post looking for some concrete practicalities about taking the boat, they are at the bottom.

The ferry up Lake Tanganika leaves from Mpulungu. This small, hot, village is a at the northern tip of Zambia. We took the bus up north on Wednesday, October 1 (at 5:00am) and we were “thrilled” to discover that it was seriously infested with cockroaches. This made for a very exciting “edge of our seat” 15 hours. We arrived in Mpulungu after dark and tried to find a hotel called Npika Lodge. Luckily Zambians are the friendliest people ever and repeatedly pointed us in the right direction down the pitch black streets. We pitched our tent (for the hefty price tag of $20US per night) and asked if there was anywhere in town still open for dinner. Sadly, no… so we shared a KitKat for dinner and went to bed.

The next day we were told that the ferry generally comes a some point on Friday or Saturday, and leaves a couple of hours after it arrives. Furthermore, you can’t buy tickets until you get on board. Since we didn’t need to search for ferry tickets, we spent most of Thursday doing our laundry which was very much needed after 4 dusty weeks. We sat in beautiful Mpulungu, and waited. 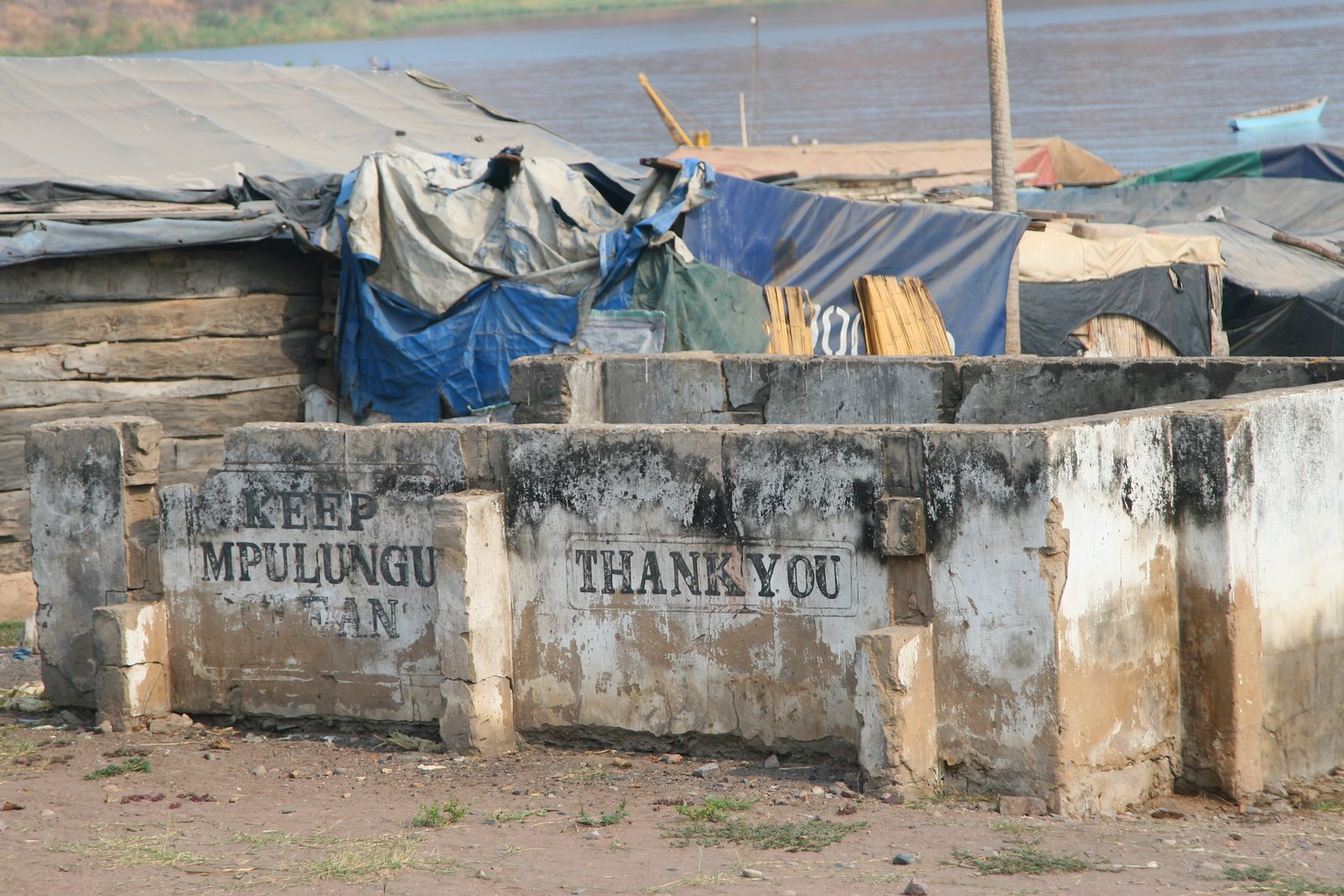 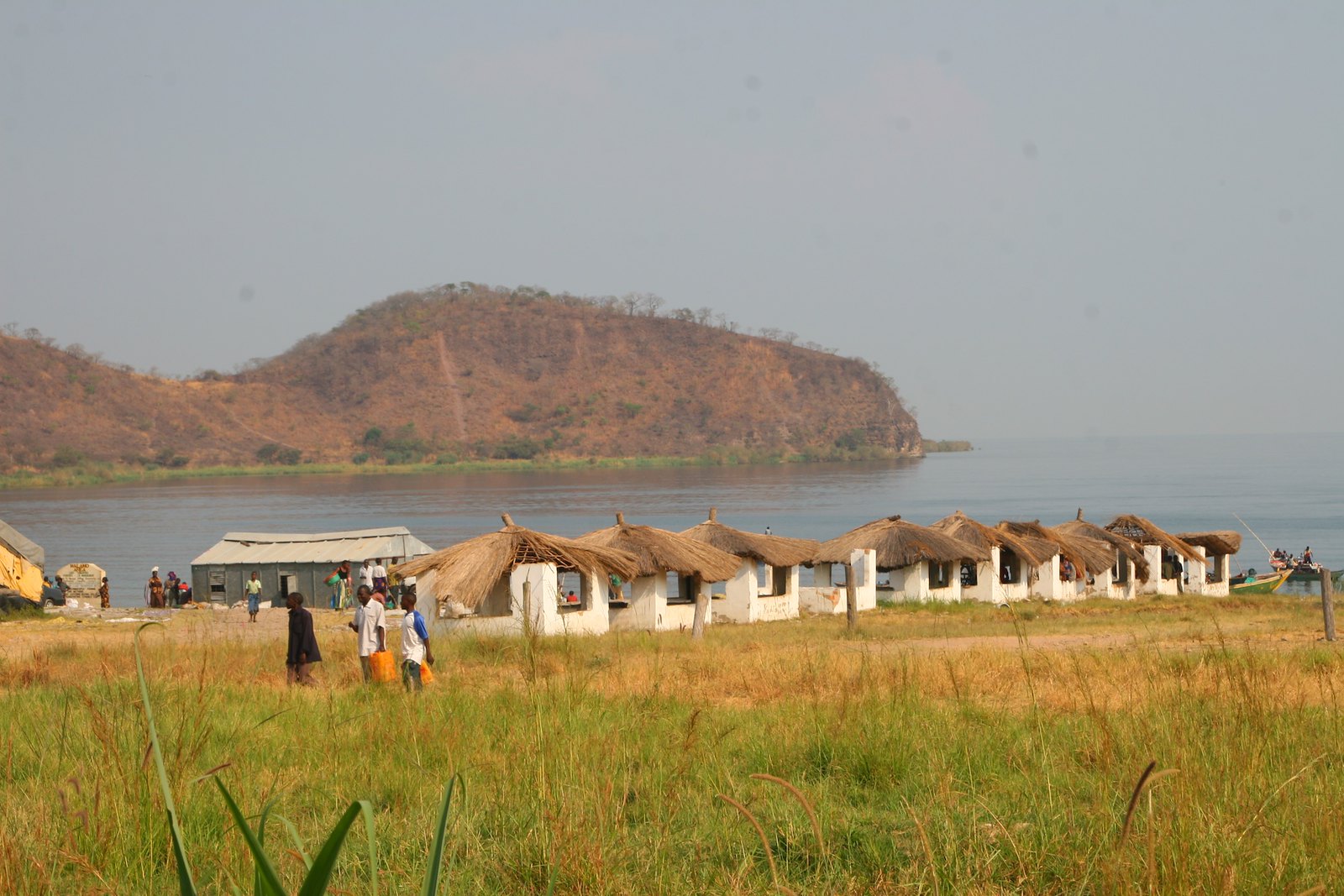 On Friday, October 3, we woke up, so excited to finally take the ferry. Except that… the boat didn’t come. When we talked to the guy at the port in the morning, he expected that it would soon be on its way – when we spoke with him again in the evening he had talked to the boat. Yes, the boat would come Saturday morning, he told us, but before it goes up to Tanzania it needs to take refugees back to the DRC. Though I was totally disappointed this is the type of delay you can’t actually be angry about so we formulated a new plan for getting to Tanzania. From Mpulungu to the Tanzania border post it looked to be about 200km. Should be simple.

Since no trucks were heading our way, after much discussion with the bus station guys, we decided to take a minibus to “the junction” 40 kms away and try to get a truck from there. The bus station guys walked us to the minibus station, got us on a minibus and ensured we knew the right price to pay. The minibus was an adventure itself, on a small bus meant for 14 people we packed in 21 people, all their stuff, all the bottles from Mpulungu that needed returning to the bottle depot, and some fresh fish, which hung off the roof. After 10km or so we picked up a few more passengers and their bicycles. Quite the adventure. 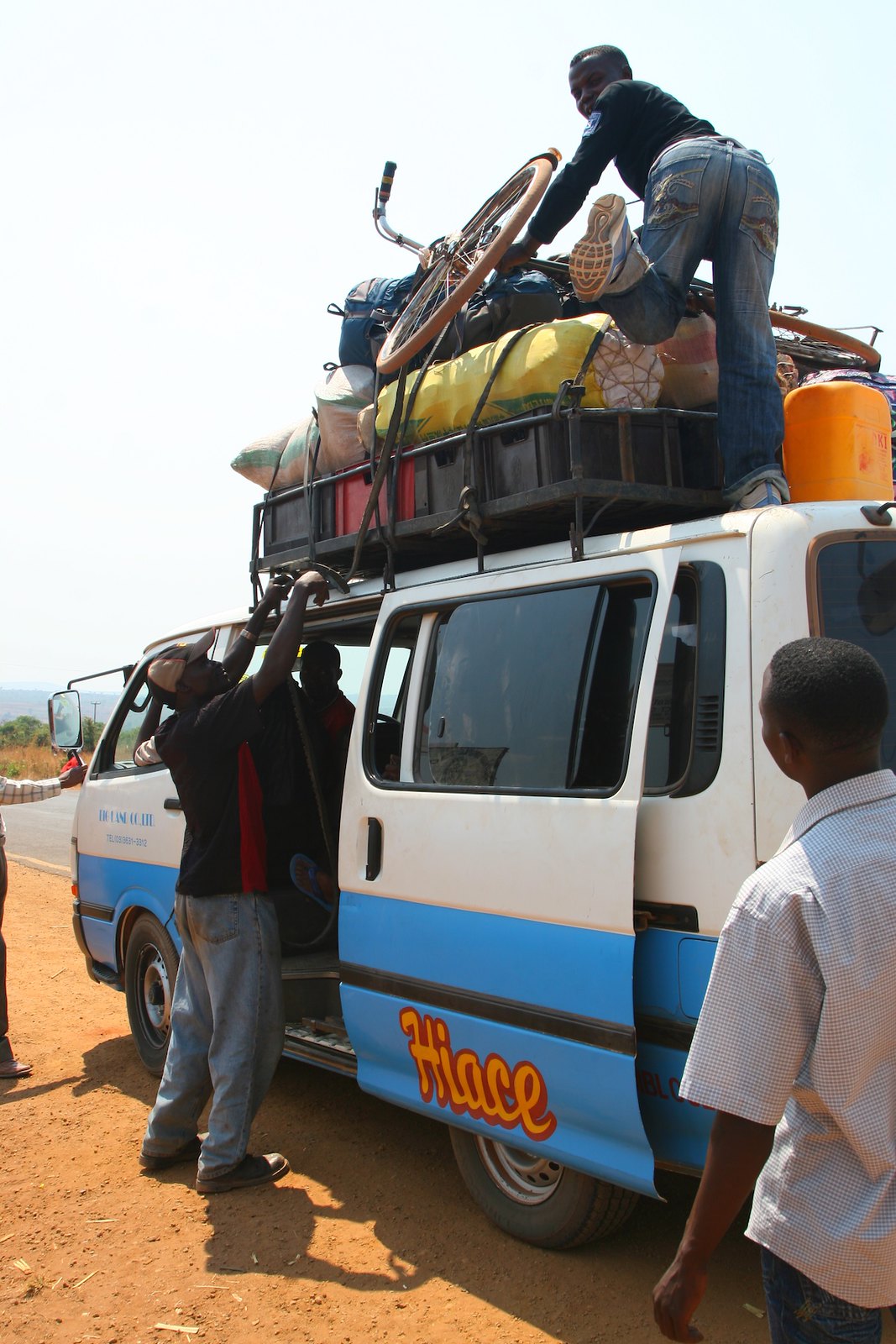 After carting us around town doing their errands, the minibus drivers dropped us at “the junction” (the only intersection along the road) where they ensured that everyone there knew we were trying to get to Nakonde, so that they could help us. And help us they did, every time a truck drove by the junction everyone (except us, they wouldn’t let us) would flag the truck down, run over and find out where it was going. After several hours (and only about 5 vehicles) they hit pay dirt and we piled in to a big Time Truck going to pick up a load of sugar in Nakonde. 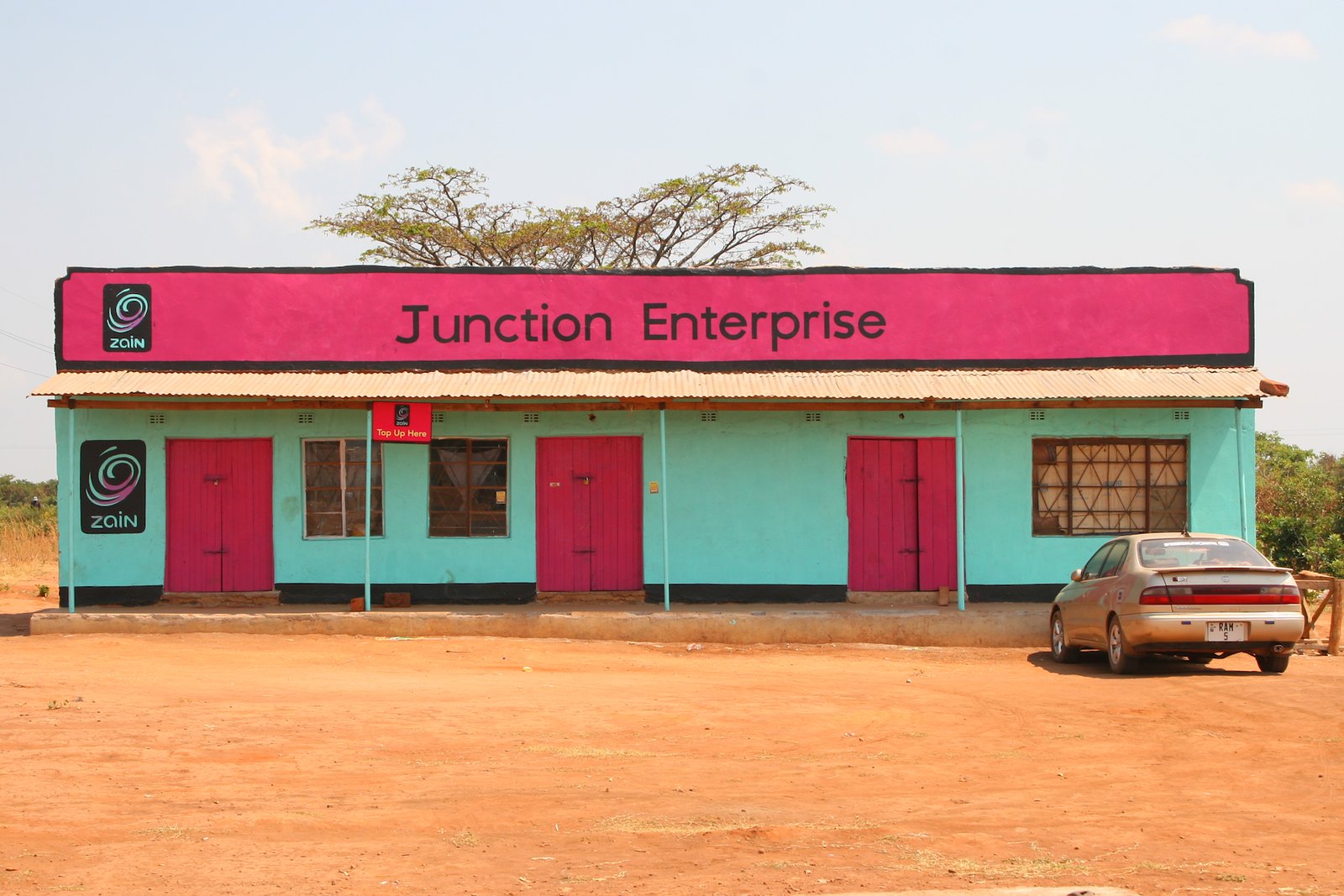 We joined the driver and two other guys (we aren’t really sure what they do, maybe help load and unload the truck?) in the cab of the transport truck. Our driver was incredibly friendly and we spent most of the ride chatting about family and politics and everything in between. Whenever there was a lull in the conversation he cranked up his Christian Country Music tape, which we listened to three full times, and we all rocked out to catchy tunes like “Oh What a Wonder You Are.” By the end of the drive we could sing along.

After 4 hours (and about 150km) we saw several transport trucks pulled over at a big warehouse. “Plans have changed…” said our driver. “We need to stop and load here, but don’t worry, I talked to the other driver who leaves now and he will take you to Nakonde.” We were amazed that he had arranged onward transport for us! We tried to give him some cash (as is the practice for hitching in Zambia) but he would have none of it. So, we said goodbye to our new friend and piled into our second truck of the day. 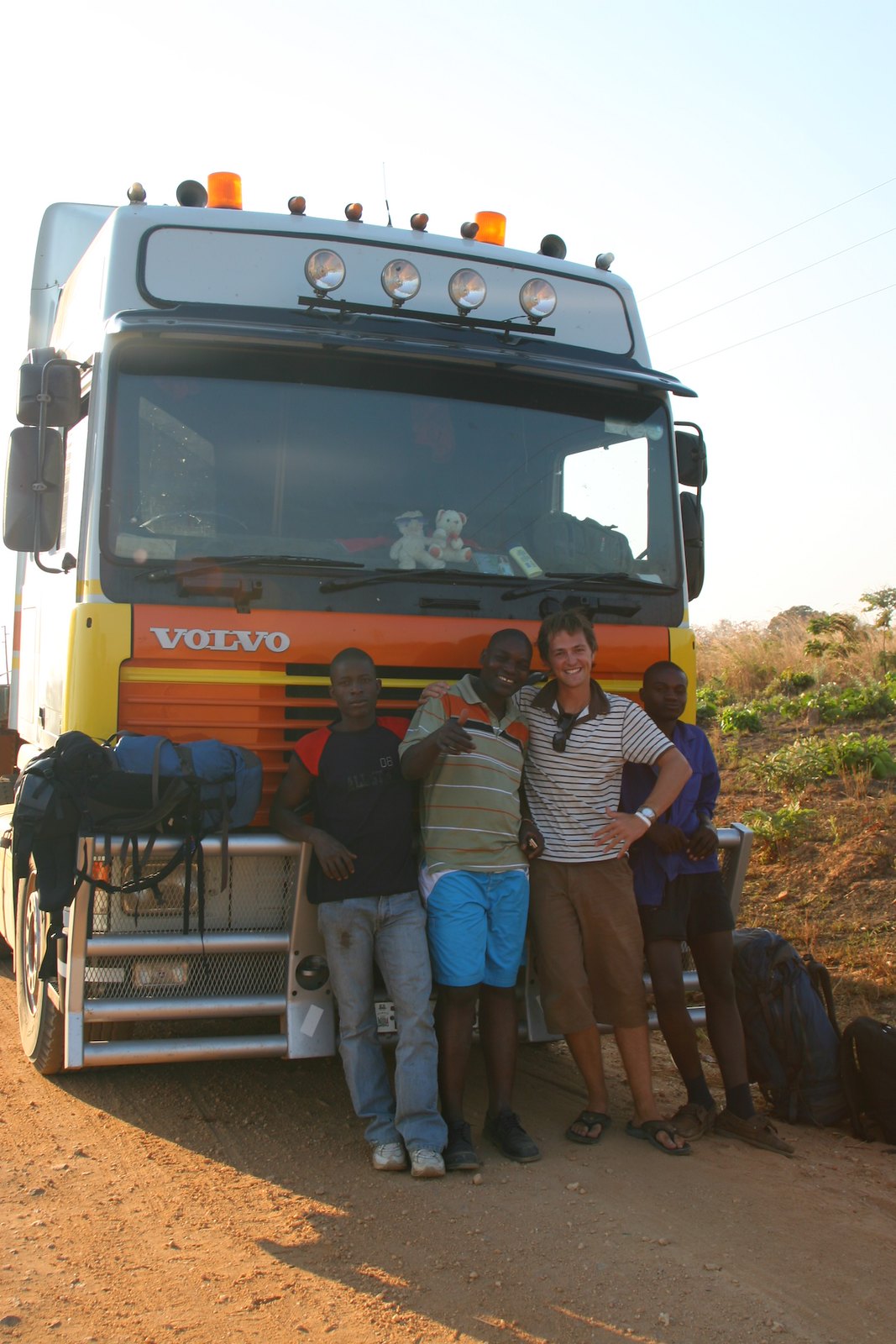 This truck took us all the way to the turn off for the border (about 10km away from the border itself) dropped us off and told us the police would help from there. Sure enough, they could they found us a “taxi” into town, really just a ride with the Deputy Head Engineer of Nakonde who took us to a hotel and arranged to pick us up at 6:50 the next morning so we would get to the border right when it opened. All this service for just a few dollars in gas money. After he left the hotel we looked at the price list and realized we didn’t have enough money to stay there (literally, we didn’t have enough Zambian cash). But rather than being rude, the hotel staff asked how much money we had, figured out a place that we could afford, walked us there (and carried our bags for us), checked out rooms for us, and made sure we actually ordered dinner before they returned to their hotel.

Although the 220km from Mpulungu to Nakonde took 12 hours (transport trucks go about 30km/hr down bumpy dirt roads) the amazing people we met along the way made the day seem to fly by! Sure enough the next morning, my 26th birthday, our friend the Deputy Engineer was there to drive us to the border. All said, Zambia was the friendliest country we have been too yet!

This made for a nasty shock when we crossed the border into Tanzania. Since we had no Tanzanian Shillings we had to first find an ATM. A tout from the bus company hopped into a taxi with us and took us down to the ATM. The ride was quoted to us at about $2. However, since the ATM only dished out $10 bills, the taxi man took it and refused to give us change and then tried to drive off with my bags. We were totally unimpressed. Since we were livid at the tout (who said nothing) and the taxi driver we decided to go buy our tickets from the bus company offices rather than the tout. It turns out the bus cost $15 less per person than the tout had quoted. Needless to say, we were less than impressed with him and were happy to be rid of him when the bus finally left at about 9:15.

We spent my 26th birthday in transit, it took us from 7am – 11pm to get to a hotel in Dar es Salaam. For birthday dinner I had $1 rice and beans at about 4pm (we did go out for a nicer dinner the following day). When we finally found a hotel with space in Dar we were exhausted. I called my mom and dad to let them know that I was alive (and also because if I hadn’t it would have been my first birthday ever were I didn’t talk to my parents) and we crashed. This was, I am sure, my most memorable birthday weekend ever.

So you wanna take the MV Liemba from Mpulungu? Here is some information that we wished we had:

If you came across this post for info and successfully end up taking the boat we would be thrilled if you could let us know how it went through a comment!