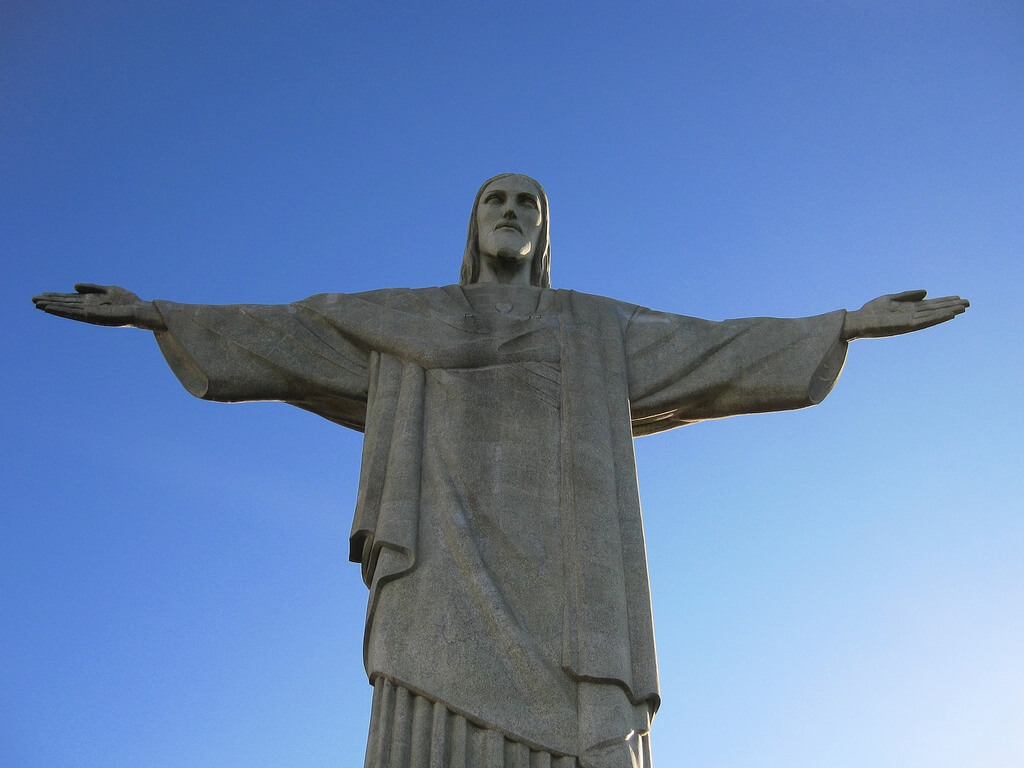 Last time we left you we had just crossed the border into Brazil at Foz do Iguaçu to take in a second helping of the gorgeous Iguazu Falls. That night, we hopped on an overnight bus that would take us to the massive city of Sao Paulo—a semi-cama bus (think airplane-style reclining seats), with no meals, no wine, no late night champagne, and no movies, all at a higher cost than the most luxurious bus we took in Argentina. Next time you get into a ‘my bus system is better than your bus system’ fight, side with Argentina. Seriously, we got into a few on our travels. It happens.

We squeezed into two separate dorm rooms, the only two remaining beds, at the friendly O de Casa in downtown (a very loose term considering the size of the city) Sao Paulo. There we ran into a girl from Sweden who claimed to have run out of money, so she was just hanging around the hostel until her flight home. Later that night she decided to head out to the bar.

Ok, we’ve been on the road for a while so we’ve seen our share of weird-os. If you are reading this and you are a backpacker, listen up—er, read up. First, just because you are in a foreign country, you do not suddenly have permission to do weird things in public. We’ve seen a backpacker in the middle of a packed internet cafe decide to do yoga on the floor (complete with some thrusting move involving a chair). Would you do this at home? No. Second, why do you insist on dressing like you belong to the circus—that is, if you are even wearing a shirt. Hey, trustafarian—growing nasty dreadlocks are not mandatory. Third, don’t wear around your Che Guevara t-shirt and spout off to everyone you meet how you are against “the system” and you can’t stand the capitalist world—only to turn around and pull out your SLR camera, log on to Facebook, and hop on a plane to criss-cross the globe. I don’t want to get on any ideologic platform here, but hey, those aren’t products of socialism, clown-pants. Fourth, if you are going to travel, don’t sleep in to 4pm everyday and head out to the bar each night only to complain you don’t have money to see anything. If you want to do that, live in your parents’ basement with your Che poster and go to your local pub. The number of backpackers we ran into that just sat around and saw nothing truly amazed me. You could ask them what they’ve seen and they wouldn’t even remember the bars they’ve been to. Yes, nightlife is a part of travelling, but don’t let it stop you from seeing the real wonders of the world.

And yes, there are some awesome backpackers out there—we were lucky to meet a bunch—but, we’re just harder to spot, because we’ve had showers in the last month.

We didn’t really give Sao Paulo a fair shake. It really isn’t a tourist city, so if you do plan on going you’ll need to stick around for a while, get to know the local hotspots, and get in touch with the vibe in the city. Just stay away from the centre on weekends. I’m surprised I still have two kidneys. 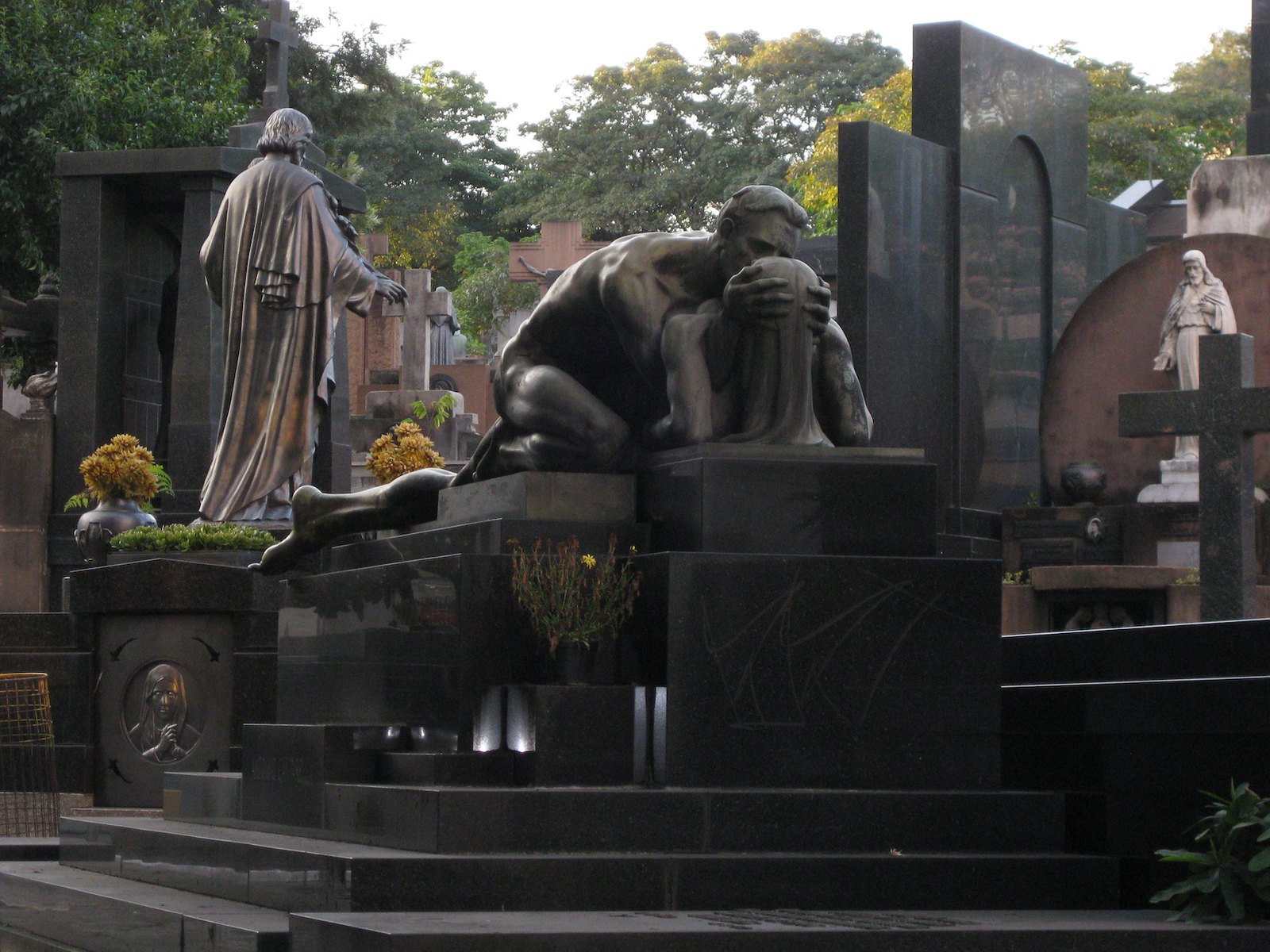 From Sao Paulo we headed to the very chill town of Paraty—pronounced Pear-a-chee. (Yeah, just give up on Portuguese now. Unlike Spanish, you can’t simply sound words out, so I spent the whole two weeks pretty much butchering their language. Sorry.) A beautiful stop, but the real highlight is a natural waterslide about 10 km out of town. In the evening, we hit the town with a small group of Brazilians from our hostel. One of the guys made a futile attempt to teach me to Samba. It was a lot easier to teach him North American style dancing: grab a drink, stand at the side of the dance floor, look around, and if you’re feeling crazy (once you’ve finished your beverage) you can do some simple moves like the double-uppercut (both arms close to your chest in the upper-cut position, each arm alternating in vertical movement, optionally in sync with the music). 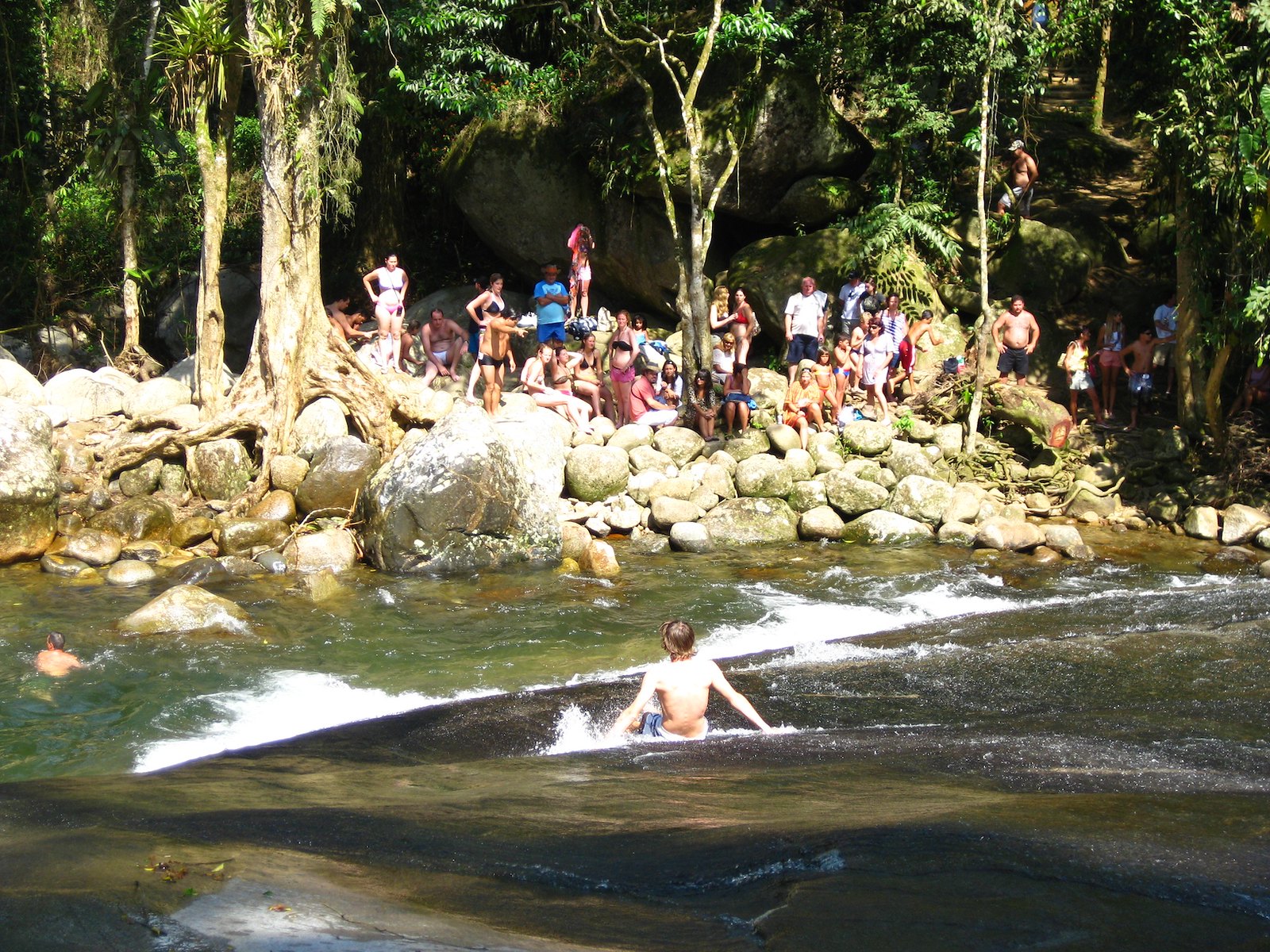 After a wicked hang-over—caipirinhas have a lot of sugar in them—we moved on to the island paradise of Ilha Grande (pronounced Eel-ha Gran-jeh). If you ever travel along the idyllic Costa Verde (Kos-Ta Ver-jeh), I’d highly recommend a few nights at the luxurious, yet inexpensive, Pusada D’Pillel (no idea how to pronounce this). We ate by far the best breakfasts of our trip at this guesthouse, all included with the room. There are plenty of hikes on the island and we chose to do the most popular one to Dois Rios, a pristine and near-empty beach framed by two rivers draining into the ocean—and it’s also the site of a formal penal colony. Beautiful. The whole scene came with a beach dog that would hunt crabs by digging down into the sand, launching the crabs into the air with his snout, and biting them in half. What can I say, the dog had talent. 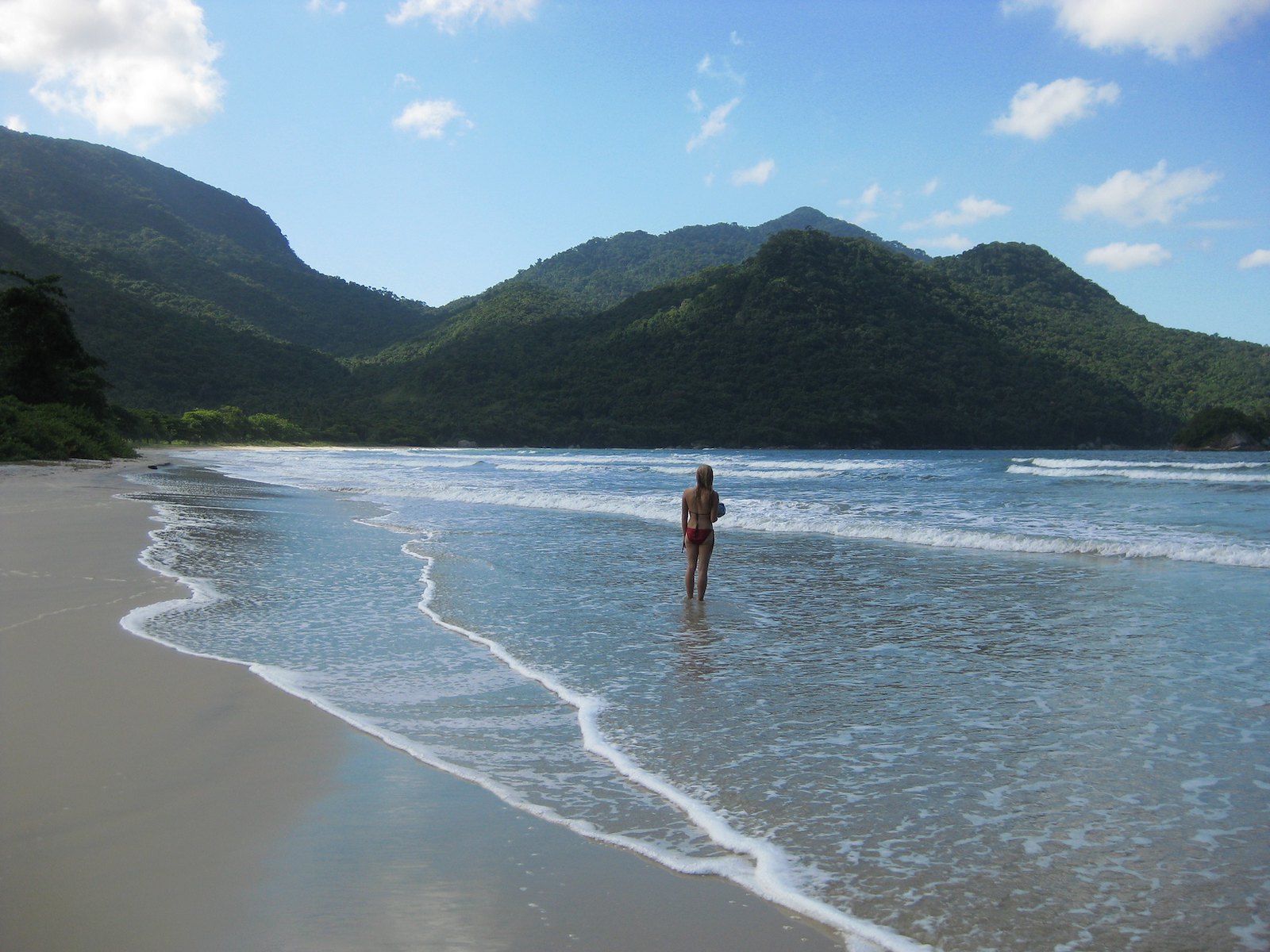 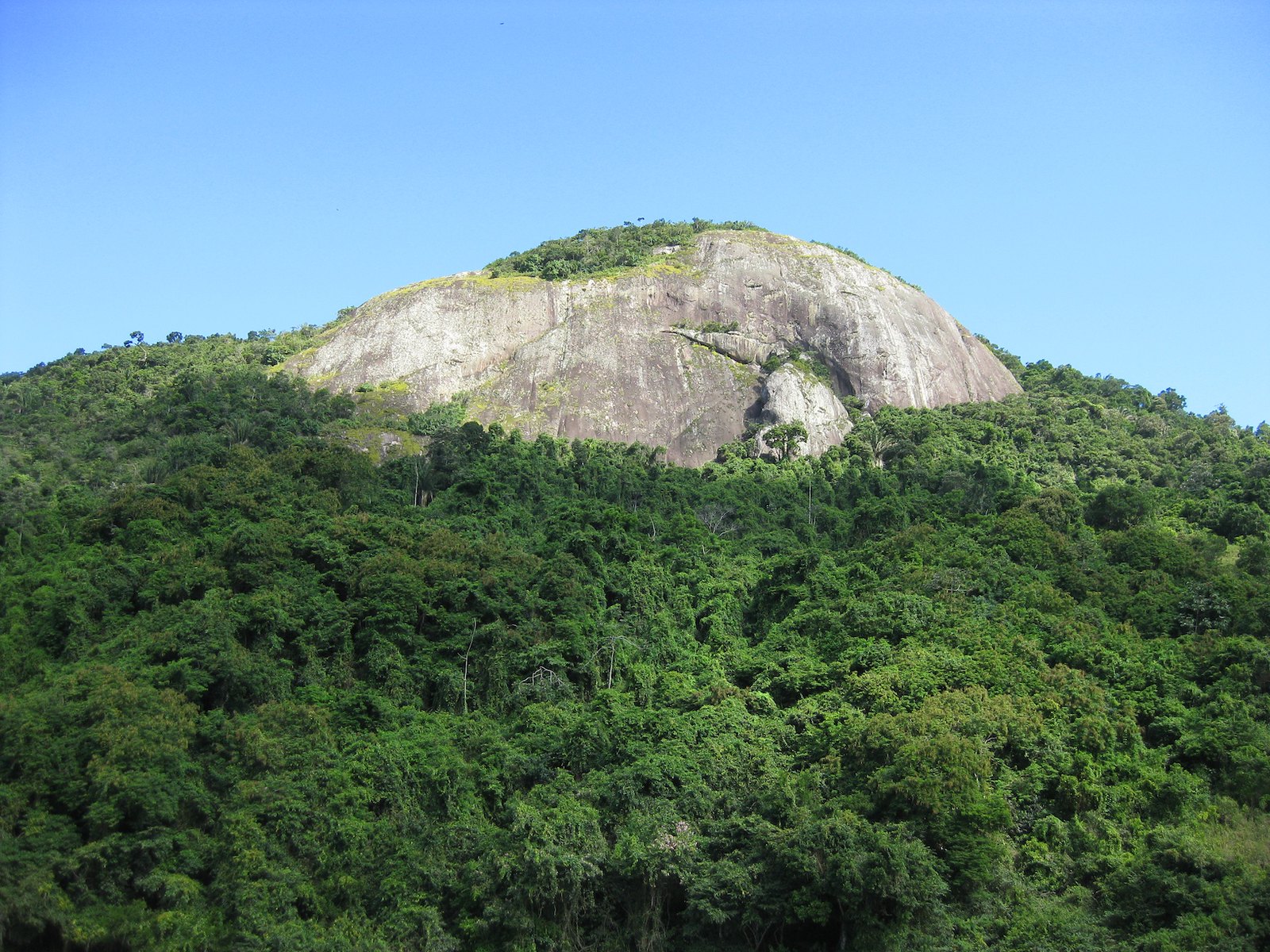 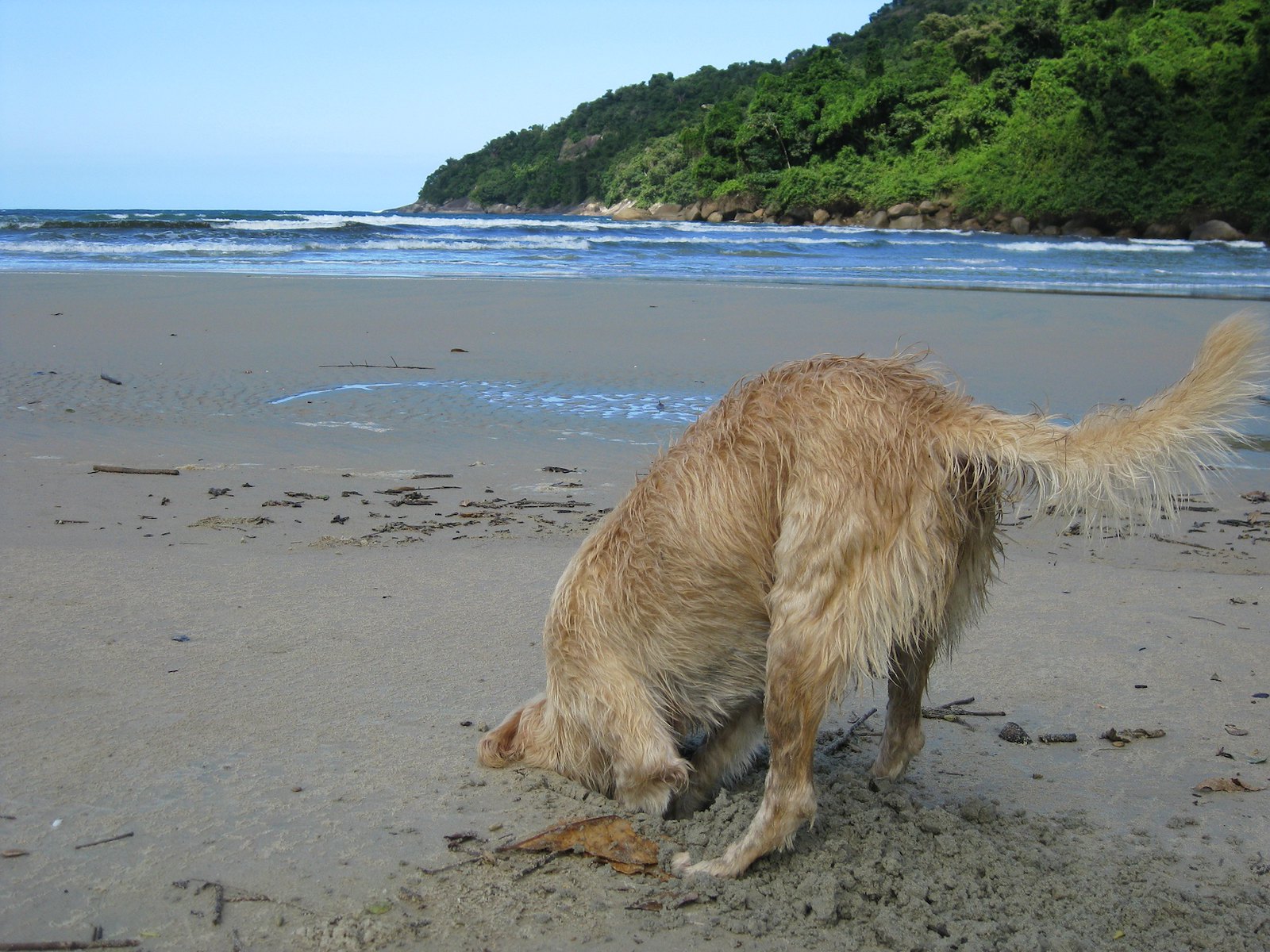 And finally, there was, of course, Rio de Janiero (He-o de Janiero). We stayed in our last hostel in Recreio, a beachy suburb, where we caught up with a girl we met in Uganda and took in some surfing. And because it was our last hostel of the trip, of course things went off the wire. That night a miniature monsoon rolled in and the power went out. By candlelight, the backpackers gathered and we tried to figure out what we would do about dinner. The only phone number posted in the hostel was for a pizza place that everyone there claimed was ‘absolutely awful’. A friendly Swede recommended we order some delicious Bob’s Burgers. Great, what’s the number? Oh, you don’t have it. Ok, I guess we’ll go back to pizza. “But the pizza is awful! You really shouldn’t order it. You really should order Bob’s.” How? “I don’t know. But don’t order pizza. Order Bob’s.” We can’t. “Well, just don’t order pizza.” Logic was lost on this particular backpacker. After ordering pizza we then tried to arrange a game of Mafia, but differences between North American and European rules almost resulted in a fight over who had the superior rule set. The next morning, after getting home from our surf, I hung up my board shorts to dry. When it came time to pack up, they were missing. After a 15 minute hunt, I found them thrown over a chair on the ground floor. Soaking wet. And sticky. I’m going to miss hostels.

We ended up renting an apartment in Rio. Not only did we get our own bedroom, bathroom, and kitchen, but we paid less money than staying in a hostel, and it was safe; well, safer than a hostel—over the past few months, hostels throughout Rio, and in Copacabana in particular, have been targeted by mask-wearing, gun-toting thieves. And even though we didn’t get tied up and systematically looted like some travellers, we did get mugged at 7pm, just across the street from the grocery store where we were headed. Fortunately, we had planned on getting robbed (which says something about Rio in itself) and he only managed to get away with the equivalent of $15 CAD. We avoided losing yet another camera because our point-and-shoot was stored safely in Allison’s cleavage. Thank God for cleavage.

And so, a little on edge, we ticked off the tourist destinations throughout Rio. We went to a Futbol game—which was just insane; we took the cablecar up Sugarloaf to take in views of the geographically gifted city; we posed in front of the giant Christ statue (Christo Redentor); and we headed up into the Valparaiso-like Santa Teresa—which wasn’t so nice, except for the deserted and often-missed Parque das Ruinas which provided us with more sweeping views of the city for free; and we lay on the famous Copacabana beach and ate BBQed cheese. We even went to a fantastic random house party at our apartment owner’s home (who is a very attractive 23 year old girl from Columbia) where I probably consumed a year’s worth of delicious meat. Rio, despite its many problems, is a beautiful, world-class city. 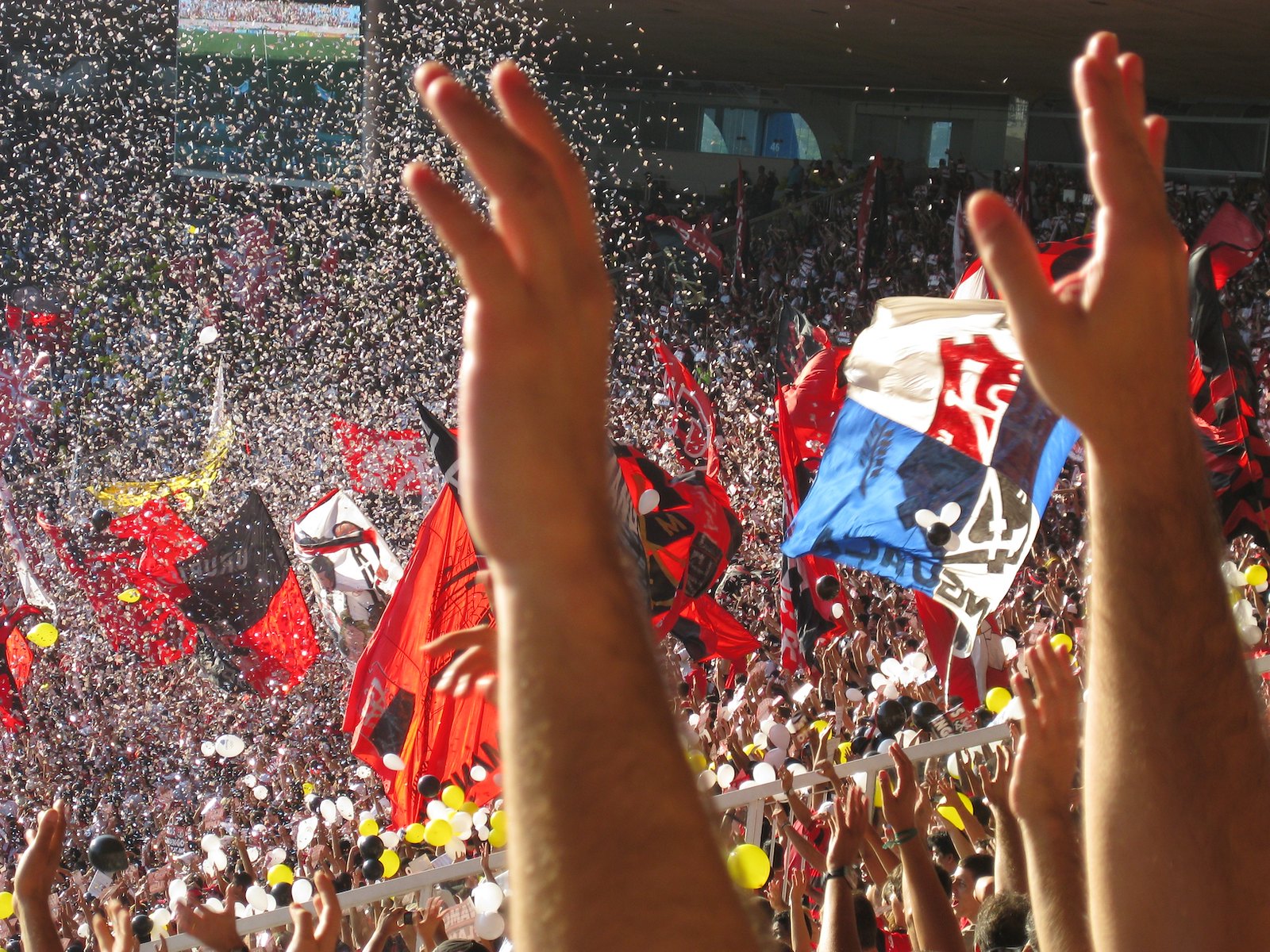 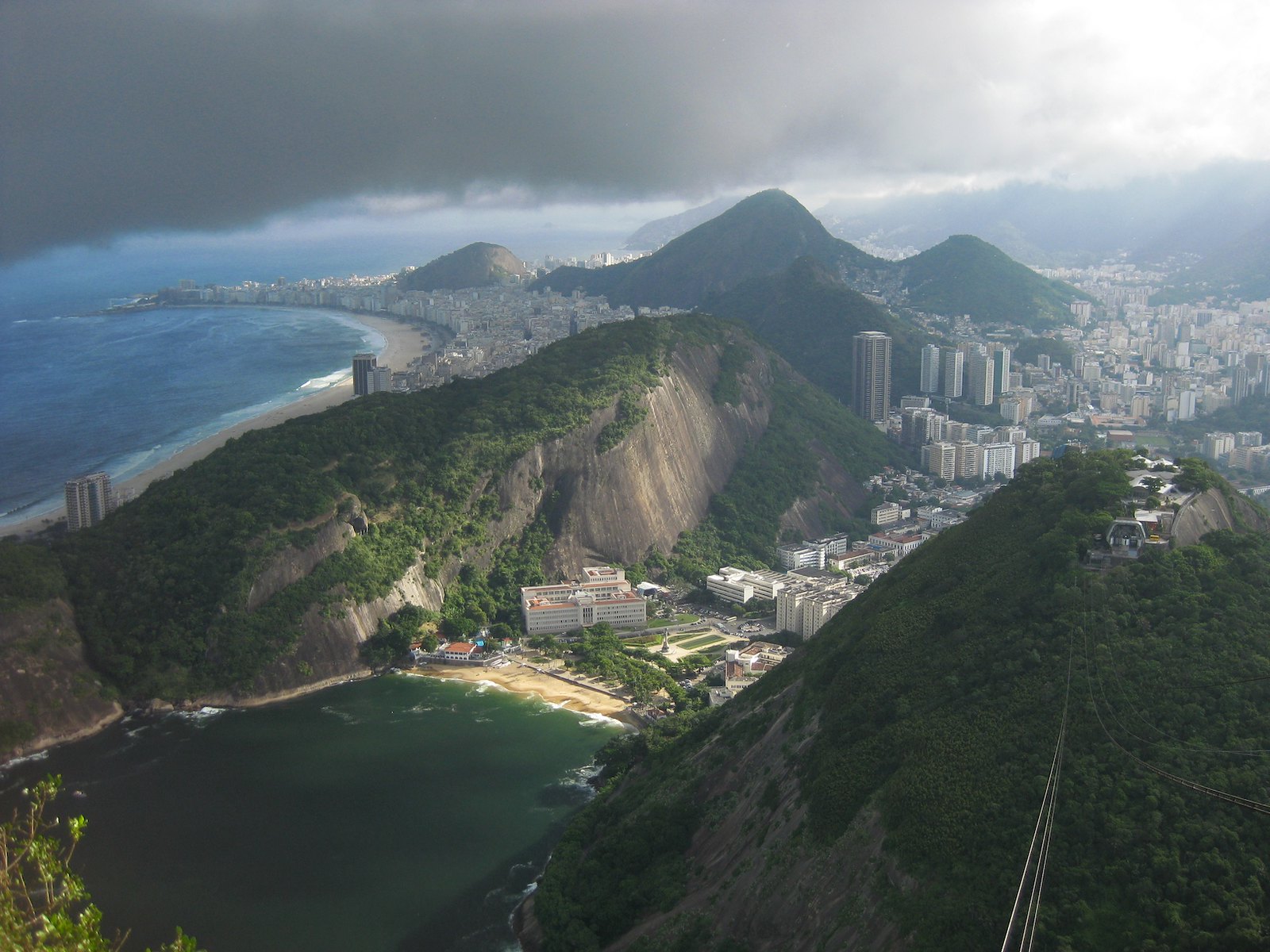 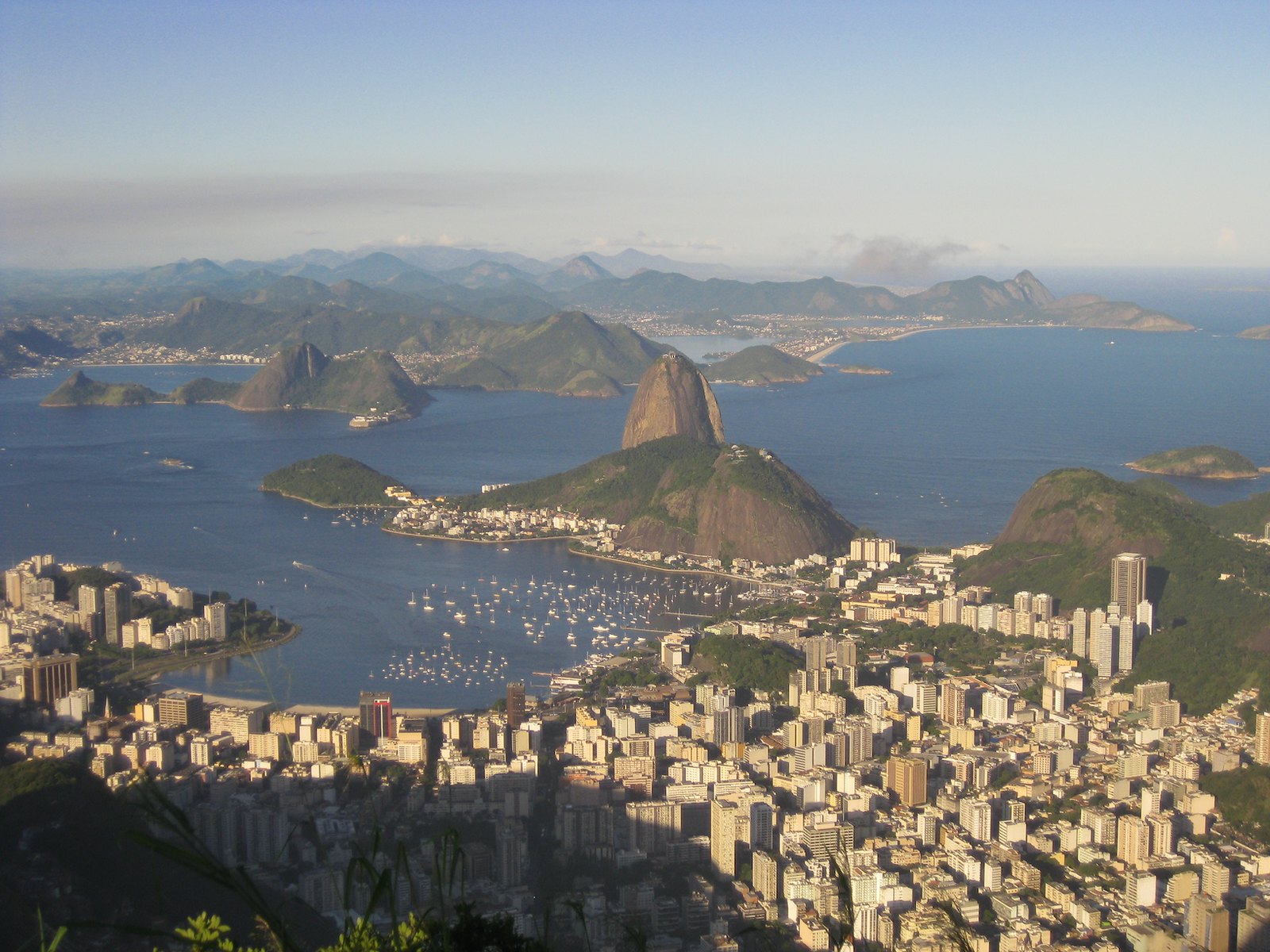 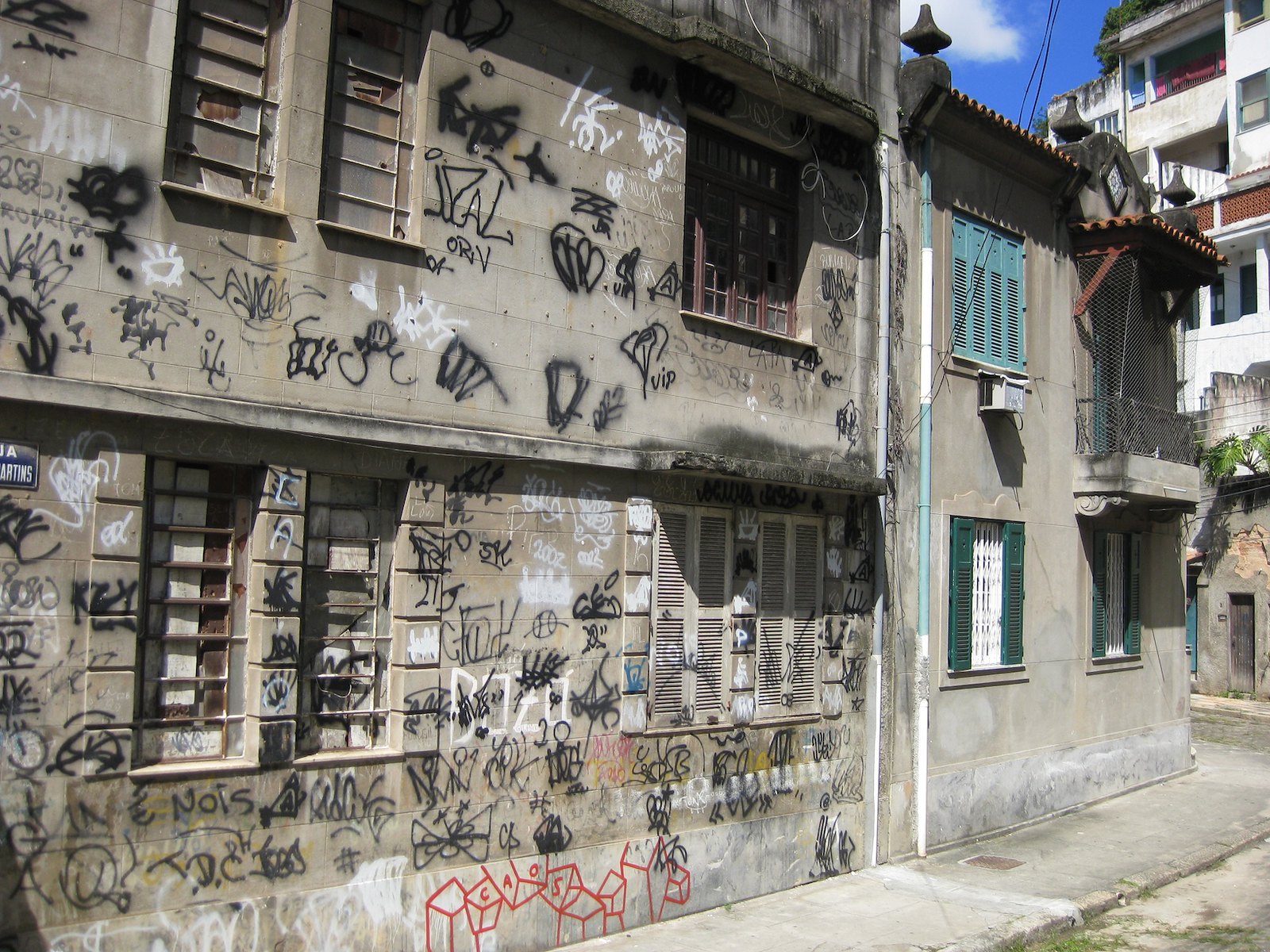 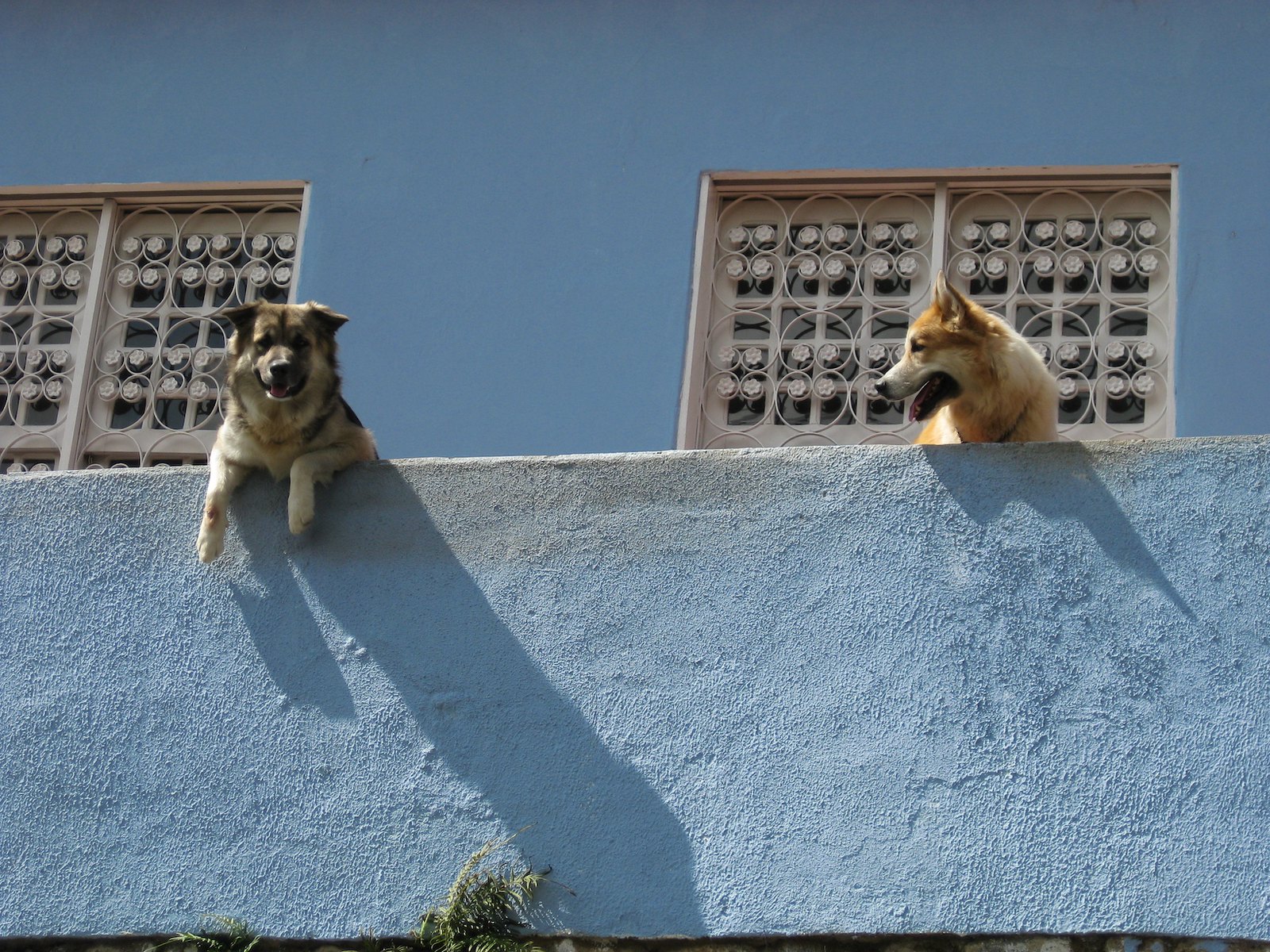 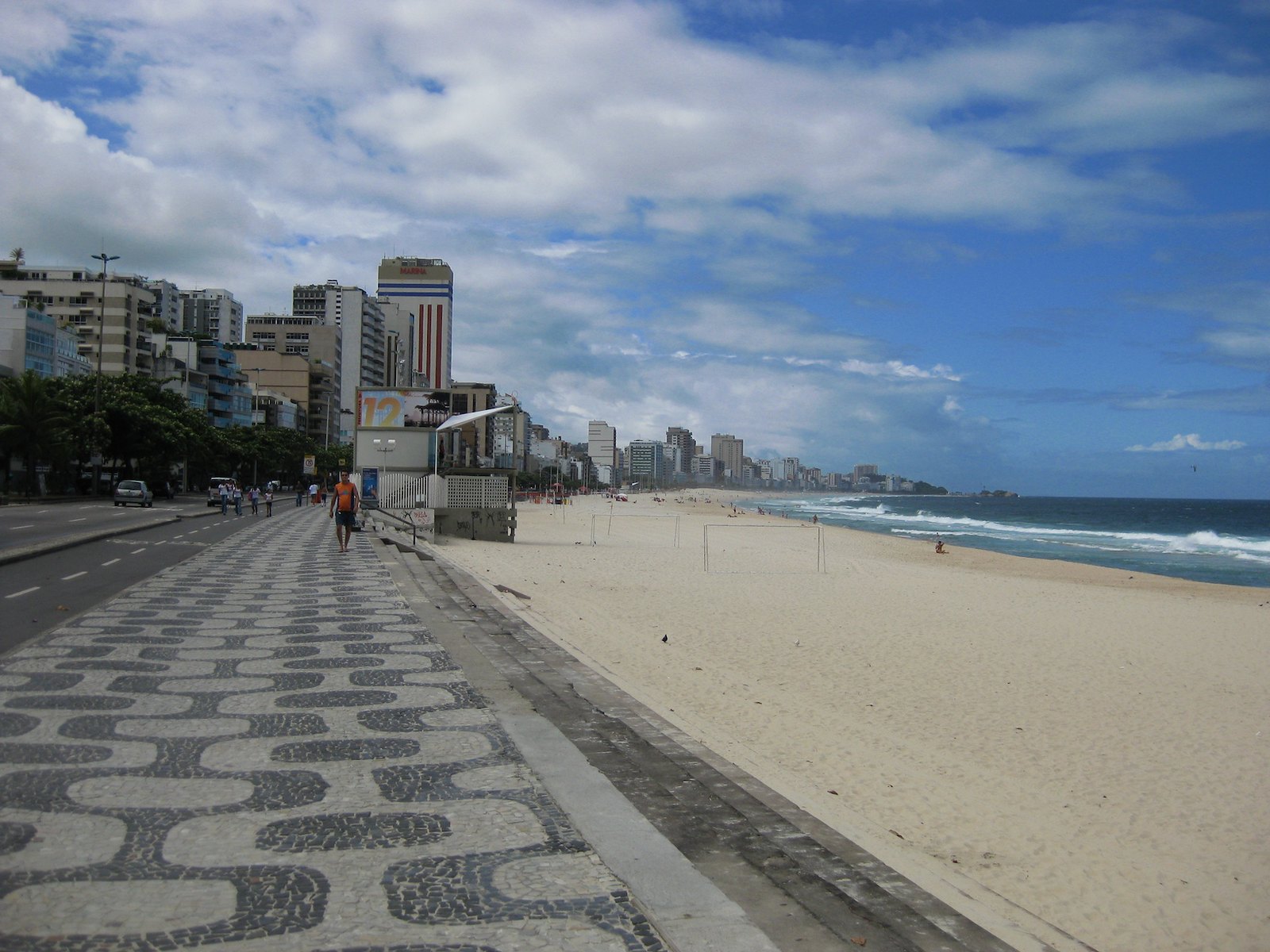 Rio just wouldn’t let us leave. We stood for an hour and a half waiting for an airport bus, which is supposed to come every half hour, that never came. We then hopped in a taxi, hit traffic, and spent the next hour and a quarter getting to know the driver; then when we got to the airport, the only ATMs were clustered at the furthest possible point from where the cab stopped; then all the international ATMs were broken, so we had to pay in US cash; then, checking in at the last possible acceptable time, we raced through security only to be informed that the flight crew was caught in traffic and the flight would be delayed by an hour; then we realized none of restaurants behind security took credit card, and there were no ATMs or money exchanges; then we saw the Wi-Fi stickers on the wall and tried to get on the internet, only to learn it was a sham (likely put up on the wall to fool the IOC for their 2016 Olympic bid)—there was no wi-fi; then we got on the plane and they announced there was a mechanical issue so we would be delayed further.

But, at some point, the plane did take off and we finally did leave. I think this was a sign that it was time to go home.