As we had a limited number of days in Croatia, we were plagued by the question of whether to visit Krka or Plitvice national park. Google was no help since most hits told us to go to both, but no site outlined their relative merits or suggested just one. So, if you have found this blog post on Google and you don’t want to read it all the way through, the short answer is go to Plitvice provided you only have the time/money for one; honestly though, try to go to both. If time (rather than money) is your only constraint, three days is enough! Family and friends, this blog post also contains travel advice we would have found useful, so please be patient!

Krka National Park:
We left Korcula on the best deal in Croatia: the cheap, comfortable and fast catamaran that leaves for Split at 6:00am and arrives by 8:30am (in contrast, the bus/ferry combo is far better advertised, costs more, and takes longer). We considered spending the night but decided instead to quickly check out the Old Town (beautiful, but we were tired of Old Towns and we probably didn’t appreciate it enough) and leave for Skradin, the small town that borders Krka. Skradin is one of its highlights. There are loads of cheap(!) private accommodation options and several ice cream shops, tourist shops and restaurants. The town is on a rather small marina that was, at least while we were there, home to some rather large yachts! This town is somewhere I would have liked even if there was no national park next door! 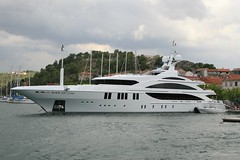 Krka is the cheaper of the two parks, and rightfully so; it is quite a bit smaller than Plitvice. We took the first boat of the day between the town and the park which proved to be an excellent idea as we were some of the only visitors there. As we were leaving around 11:00am, the crowds were beginning to pour in and queues for the boat exceeded well over an hour.

Krka is a series of beautiful waterfalls over calcium travertines. We didn’t see the whole park as it required additional boats further up river, mostly to visit monasteries, but the portion of the park that we did see was beautiful. The falls are amazing, the surrounding forest is stunning, and you get to swim at the base of the lowest waterfall (whereas there is no swimming allowed in Plitvice)! That being said, the portion accessible by the first boat is quite small; we were able to see most of it in 2.5 hours!

Plitvice National Park:
A few words of advice: if you are on the bus to Plitvice from Zadar, ask to be let off at the first stop; if you are on the bus to Plitvice from Zagreb, ask to be let off at the third (last) stop. This is where all the private accommodation is located. We weren’t aware of this, so we were dropped at the second stop (near nothing but the park entrance) where we were met by one entrepreneurial owner. After negotiating a rate, Jon, I and 2 Finns piled into his tiny car and drove to his home near the first bus stop (surrounded, as it turns out, by several other private accommodation options) where he proceeded to give Jon & I a small room with shared bathroom and nothing but a bed while the Finns got a wonderful room with a couch, full kitchen and ensuite, for the same price. Luckily the friendly Finns had a remarkable sense of justice and argued alongside us that this was unfair. The homeowners sort of agreed but decided rather than decrease our rate they would increase the Finns’ rate. This proved to be a really bad business decision as all four of us left and stayed elsewhere (highly recommended).

Plitvice National Park is incredible – a series of 16 turquoise lakes, some connected by trickling water, others through calcium travertines, and others still by stunning waterfalls. We were able to see the whole park, but we did spend an entire day there (about 9 hours) and we were moving the whole time. The crystal clear turquoise colour of the water is incredible and the natural surroundings will take your breath away. This is not somewhere to be missed. When you are leaving the park, however, be careful not to take the once per day Plitvice National Park Express Bus (or some similar name). Although it is an express bus, they charge you an arm & a leg and it is full of rowdy 19 year olds … not fun. Be careful as this bus runs only minutes before the local, cheaper, bus.

Other than the tourist bus, there are only two real problems with Plitvice. The first is the fact that the town is quite a hike from the national park. Since you be spending the day walking, you will come to resent the 2.5 km jaunt to and from your abode. Second, the town is small and there is only one place to eat: the ski chalet, which serves only mediocre pizza. This notwithstanding the fact that Plitvice is the most visited non-coastal site in Croatia with 700,000+ tourists/year. Apparently most of them are on day tours. And one last tip, for students visiting the park: there is a 50% student discount. It isn’t posted, and the park staff don’t promote it, but be sure to bring your student card along and ask for a concession. 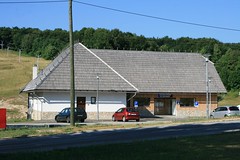 In Conclusion:
Despite our complaints we are able to decisively recommend Plitvice over Krka. First, because of it’s size (it grips you); second, although both national parks are incredibly beautiful, Plitvice has 16 lakes AND several waterfalls while Krka is limited to waterfalls (though you can swim at Krka); third, and most importantly, with all due respect to Krka… Plitvice is just more beautiful. However, both National Parks were an amazing way to spend our last days in Croatia. And as I mentioned at the start of this post, if possible do go to both!