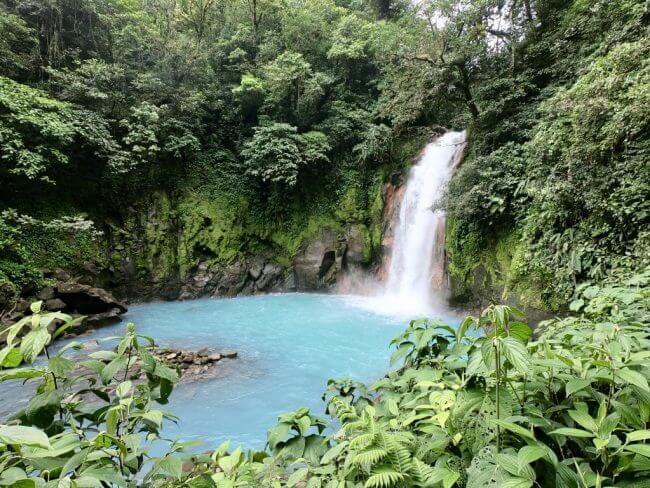 Our kids were off school last week which gave us the opportunity to see a bit more of the country we’re calling home for 3.5 months. And, wow, what a beautiful country it is.

We set off Monday morning with the intention of driving to our hotel atop the Poàs Volcano just 4 hours away. We planned to leave early, make a quick stop at a highly-praised animal rescue, and arrive at the hotel in the afternoon. But when travelling—and especially when travelling with kids—nothing goes according to plan.

We left late and our stop at the lovely animal rescue took longer than anticipated (#kids). But what really surprised us was the drive that followed. Most of the drive was on busy 2-lane highways. The thing about busy 2-lane highways is that when you get stuck behind a truck going 30km/h you too are going 30km/h until either the truck changes course or you get a rare break in oncoming traffic. So, the drive got longer and longer while our kids got more and more grouchy.

And then, just when we thought we were minutes away, we realized we’d been lead astray by Google Maps. We’d driven up one the side of the volcano only to be met with a private driveway and a road that did not connect to our hotel. We actually needed to drive up the other side of the volcano!

We finally arrived as the sun was setting. After spending 4 weeks in 30° heat, we were shocked by the cool 15° evening. But we were even more shocked to find out that the volcano had erupted that morning! It sure was beautiful, though.

The next morning we found ourselves with a bit of extra time as the volcano viewpoint was, obviously, closed. We decided to have a slow morning at our wacky boutique hotel. This hotel charmed up with its nightly fire, playground, donkey pasture, and breakfast dome.

A few hours later we set off for our next stop: Hacienda Alsacia. Hacienda Alsacia is the only coffee plantation in the world that’s owned by Starbucks. We’re still not 100% sure why Starbucks bought it (it produces just a small amount of coffee), but we’re guessing it was some kind of brilliant marketing move. The plantation is spectacular. I just wish I could have photographed it better (don’t worry, though, Starbucks has that covered).

Let me pause here for a minute here to mention two things we’ve learned while travelling in Costa Rica’s Green Season with two kids under 6:

Once we had finished taking in the views (and the caffeine) at Hacienda Alsacia, we were on our way to Chachagua Rainforest Ecolodge (about 2.5 hours away). The road was long and winding, but the views were stunning. The highlight was when we coasted down an especially steep road to discover a waterfall at the bottom!

We slept that night in a rainforest bungalow surrounded by nature’s best white noise: jungle sounds. We awoke to find sloths, wild sloths, in the trees right outside. Someone call Kristen Bell. After pulling my jaw up off the floor (and eating breakfast), we joined the guided nature walk on the hotel trails. The guide wasn’t my favourite, but the trails, views, and “hu-normous” trees made it worth it.

But the day had barely begun. After the walk we went to Baldi Hot Springs. Baldi is “The Largest And Purest Most Natural Hot Springs In The World” (but not “The Most Grammatically Correct”). It is the Las Vegas of hot springs—25 pools ranging from 20-45 degrees. It’s wonderful. And it was free for our kids.

Oh, and there are also four fun waterslides that the adults enjoyed. They were definitely not designed to North American standards (which made them, perhaps, even more fun). And did I mention there was no one else around?

Pretty good road trip so far, right? Well, it gets even better!

The next day, after another leisurely morning, we bid farewell to the La Fortuna/Arenal area and drove to Rio Celeste in Tenorio Volcano National Park. After a quick stop for lunch we arrived at the national park. We hiked the 1.5km to the waterfall, and it looked like this:

It was decidedly the most beautiful waterfall I’ve ever seen; and we mostly had it to ourselves. One couple eventually showed up so we used the opportunity to get a family picture (as one does).

After a short torrential downpour on the way back up the 200 steps we checked into our hotel and discovered it had a free guided night walk. How could we resist?

Now, it had already been a long day and the kids had already walked close to 5 kilometres, so we really pushed them to the max by signing up for this night tour. We endured one epic meltdown from Will, but seeing so many cool frogs, bugs, and even a snake and tarantula made it worth it.

And then came day five. The day before my birthday. The day we ended up claiming as my honorary birthday because it was just that good. We awoke on Friday not knowing how we were going to spend the day or where we were going to spend the night. We loved our hotel. We loved the area. So rather than squeeze in one more road trip stop we decided to stay at Rio Celeste and:

Reader, we did it.

Pictures or it didn’t happen:

Life tip: if the day before your birthday is ever extremely fantastic I highly recommend just claiming it as your birthday. Then it doesn’t matter if your actual birthday consists of a long rainy drive, a big box store, whining children, and five loads of laundry. Your “birthday” was yesterday.

And that, my friends, brings us to the end of our 5-day road trip. This is an incredible country; we’re so lucky to be here. It amazes me that we’ve only seen a tiny slice.

P.S. We had great weather on this road trip. Most of the rain was in the late-evening/overnight. We only had torrential rain twice during the day (and one of those times was while we were in the hot springs). While I can’t promise weather like this in the green season, I can promise no crowds and breathtaking attractions all to yourself.