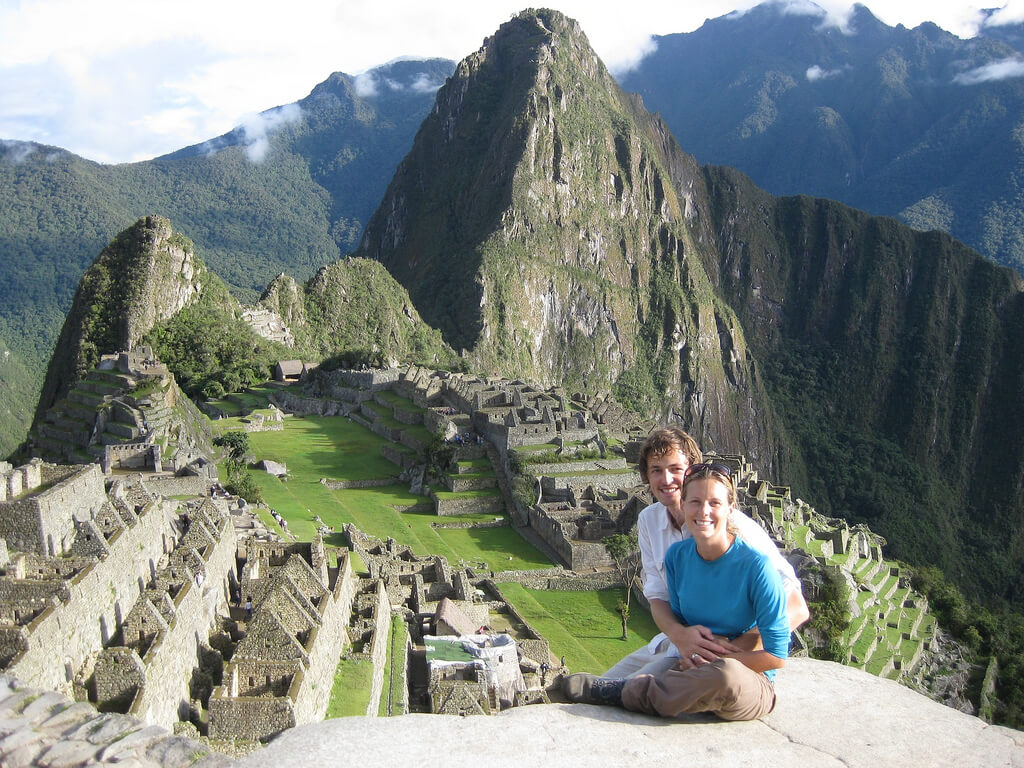 Peru offered some amazing sights, food and incidentals. The physical highlights in Peru were the Amazon Basin, Huacachina, the Nazca Lines, Colca Canyon, Cusco, the Inca Trail, Machu Picchu, and the floating islands at Puno. A food highlight was the amazing ceviche available all over but only really edible near the coast. Peru also offers amazing fresh fruit juices and Pisco Sours, a tasty drink made out of grape brandy, lemon juice and egg white. The cama busses, where the seats recline almost 180 degrees, were an overnight treat. And we lucked out with our Inca Trail weather, despite the rainy season we had only rain two of the three nights and 20 minutes one morning while walking.

When we arrived in Peru we immediately booked our Inca Trail trip through a travel agent in Lima. Despite the low season, the first available date on the trail was March 7, about 2.5 weeks away. Accordingly, we had some extra time in Peru so we decided to visit the Amazon Basin. We flew in and out of Iquitos, a thriving jungle metropolis only reachable by boat (4 days) or by plane, and stayed for three nights at Emerald Forest Camp, just down river from the start of the Amazon. Arriving at the lodge was quite the experience; we were privately boated into the camp and arrived after dark. Since the lodge has no electricity, kerosene lamps lighted the way from the dock to our bungalow. It was beautiful. In our three days at the lodge we went on jungle walks, ate larvae, went fishing for (and catching) piranhas, went on boat rides to spot wildlife and played with some not very shy monkeys. We also ate. Every meal was huge, a large salad followed by soup, a main course and dessert. Each breakfast featured a fresh juice squeezed from jungle fruit, including Camu Camu, the newest wonderfruit. On our way out of the jungle we stopped in a small town for an hour or two before going to the airport and we happened to be there for their carnaval festivities. In this town they celebrate carnaval by dancing around a large post covered in hats and painting eachother red. After chasing a few kids around I became the target of all the kids’ waterguns and paint filled bottles and had to board the airplane looking a little pink! 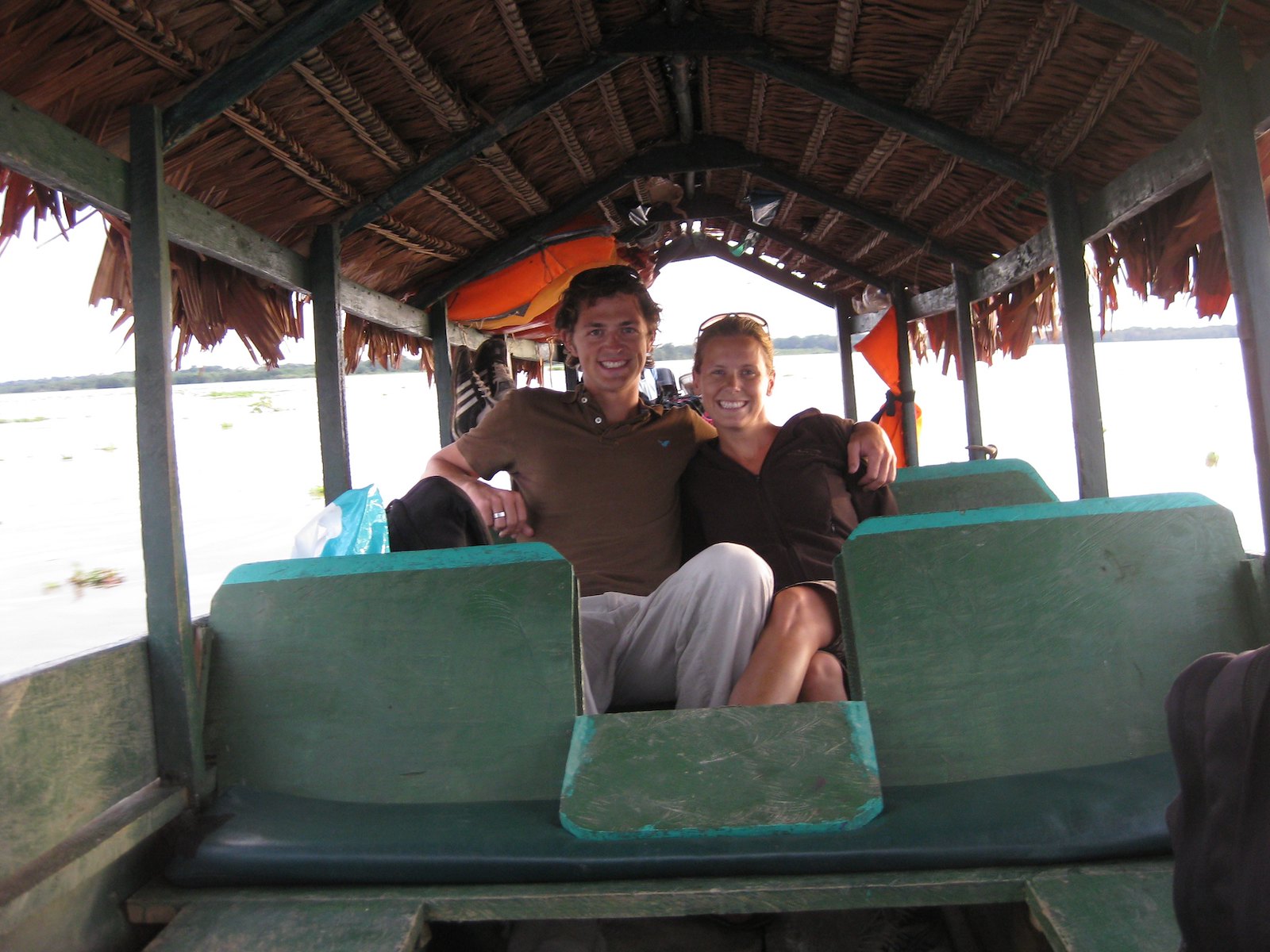 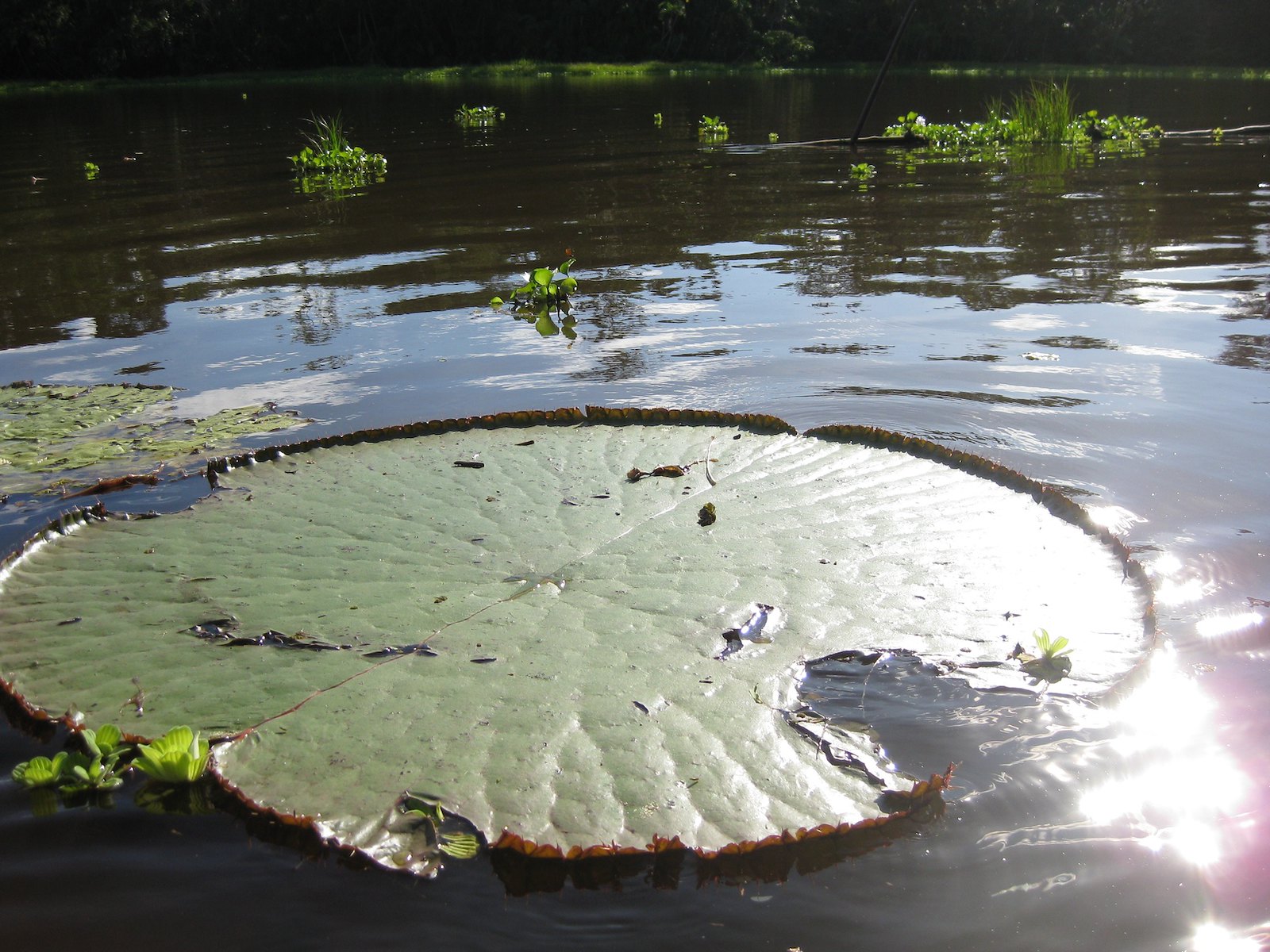 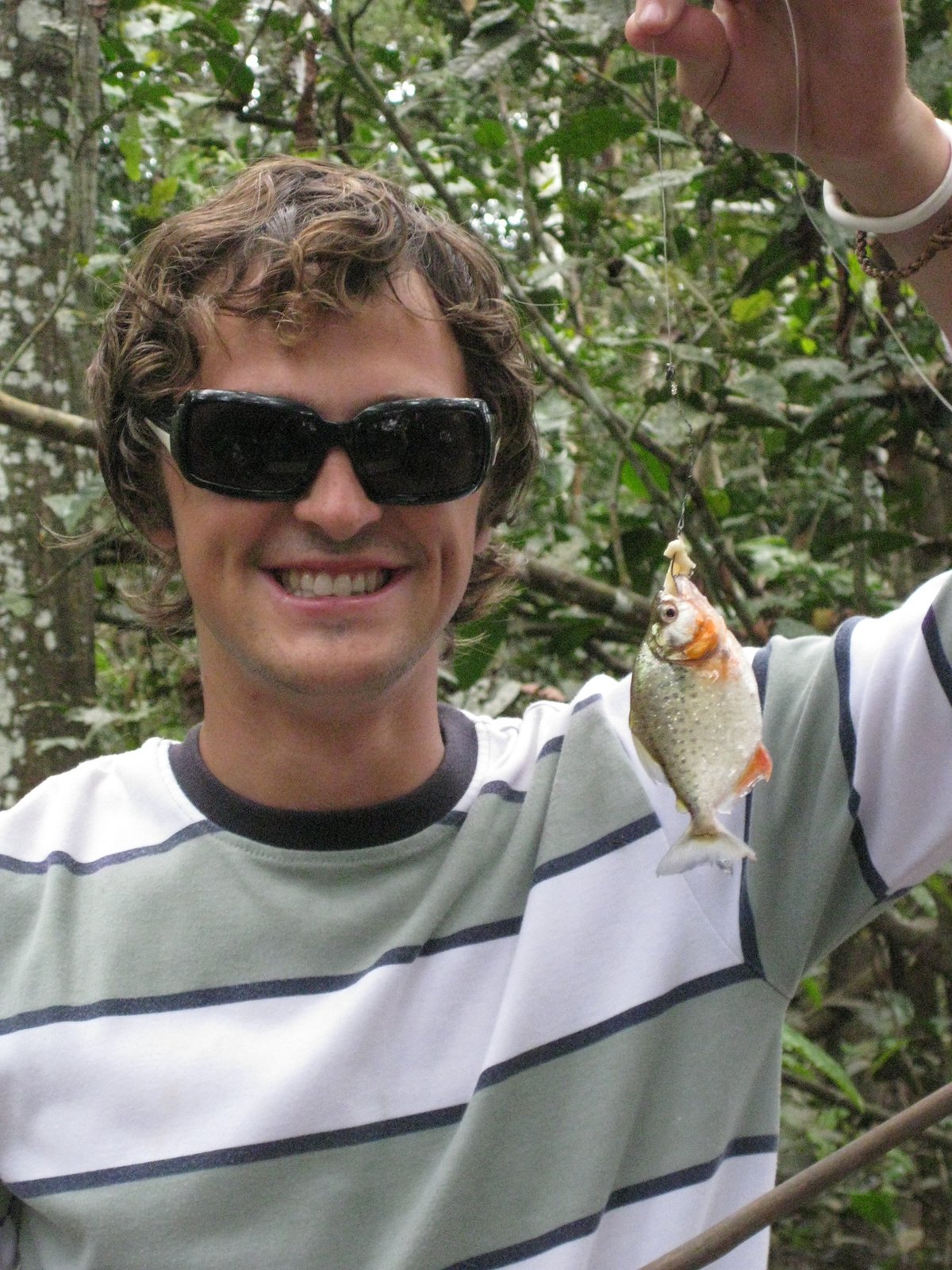 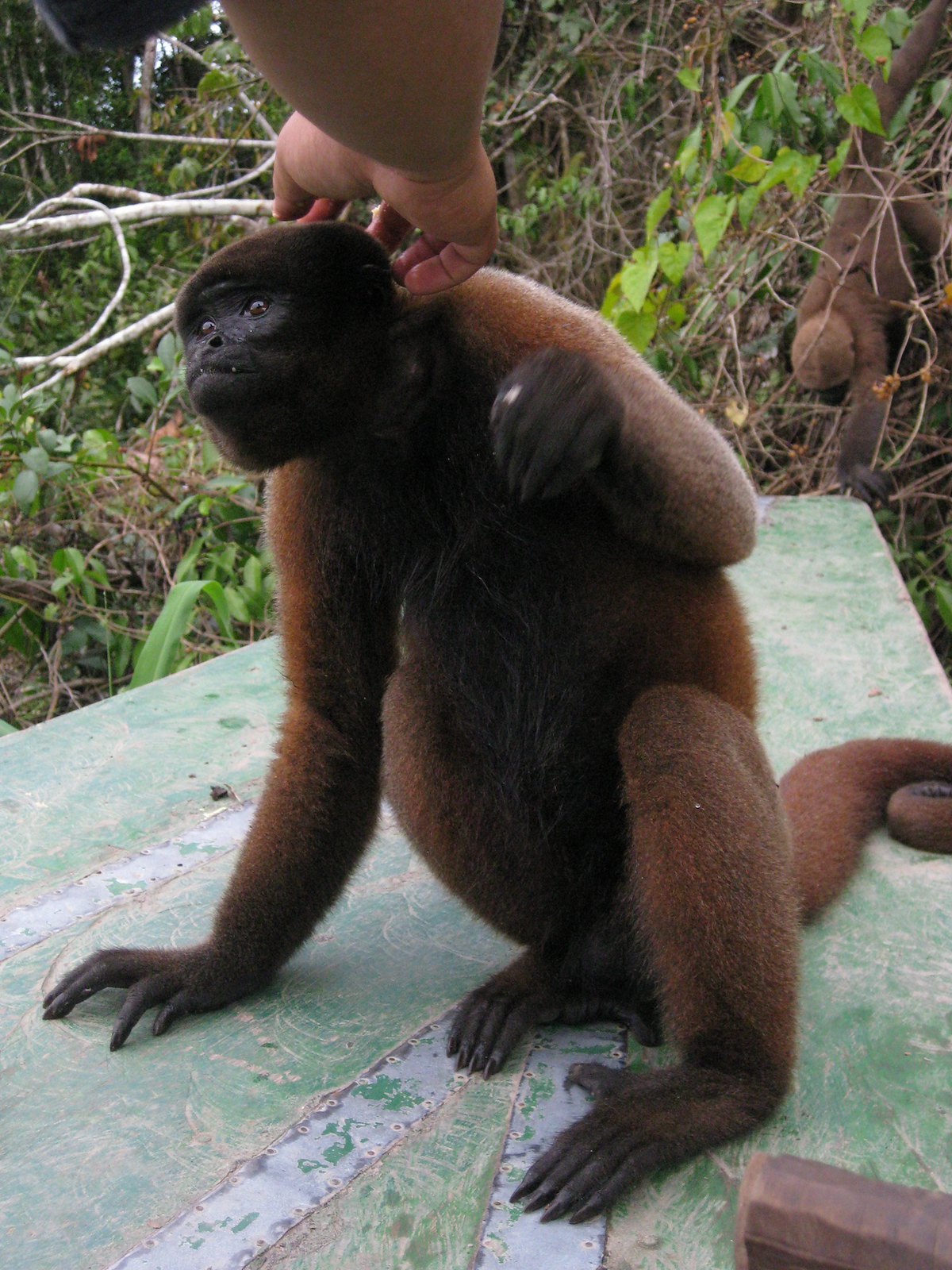 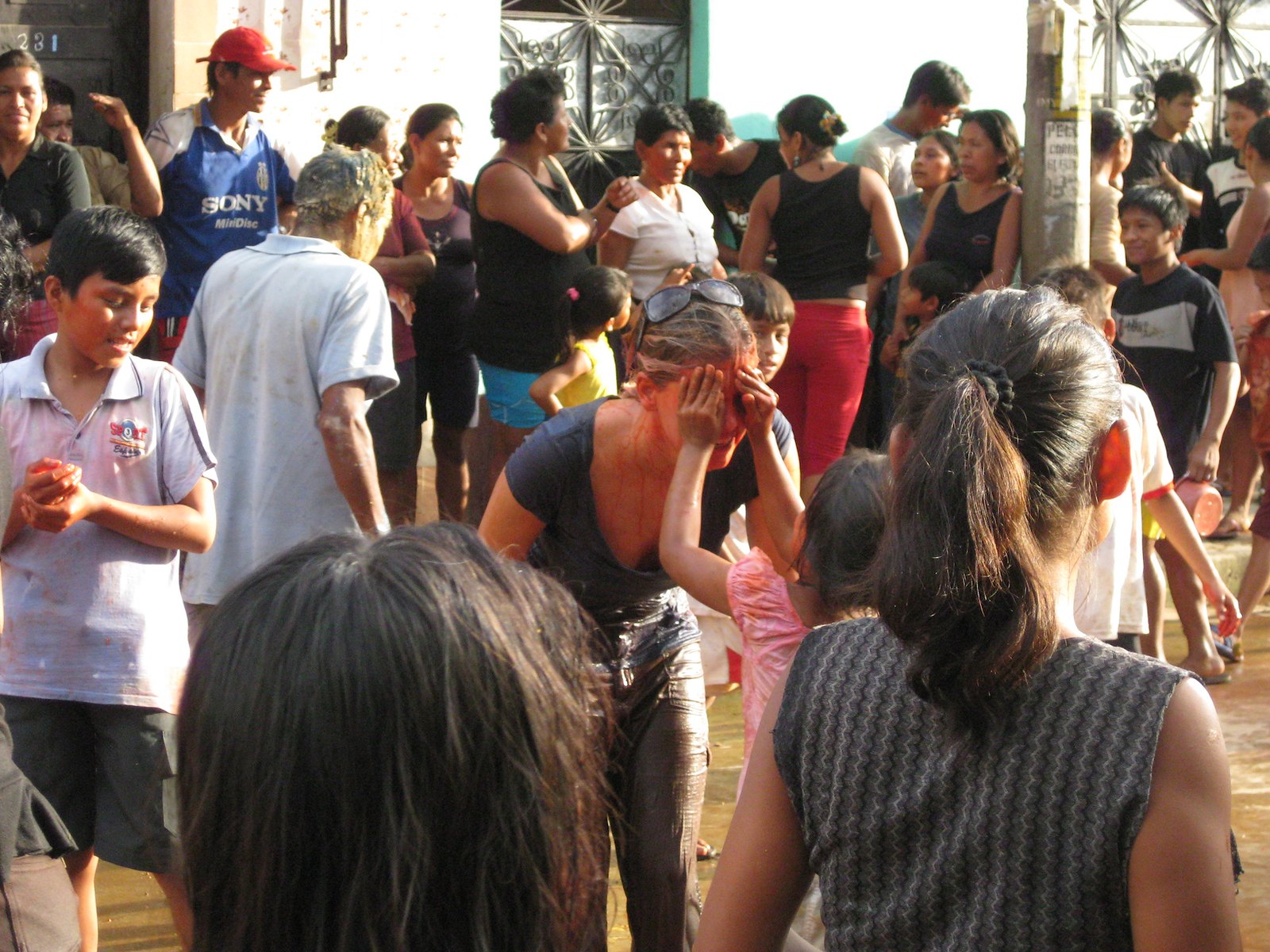 Following the Amazon Basin we went to Huacachina. This town is firmly implanted on the backpackers’ scene and rightly so. It is a beautiful oasis town in the middle of some very large sand dunes. While there we rode a boat around the oasis, and we took dune buggy sandboarding tour that really outdid the significantly more expensive sandboarding in Namibia; the tour was like a hybrid of a sandboarding tour and a dune bashing tour. It was so much fun. I also loved Huacachina because I got to play on the sand dunes – my favourite natural formation! 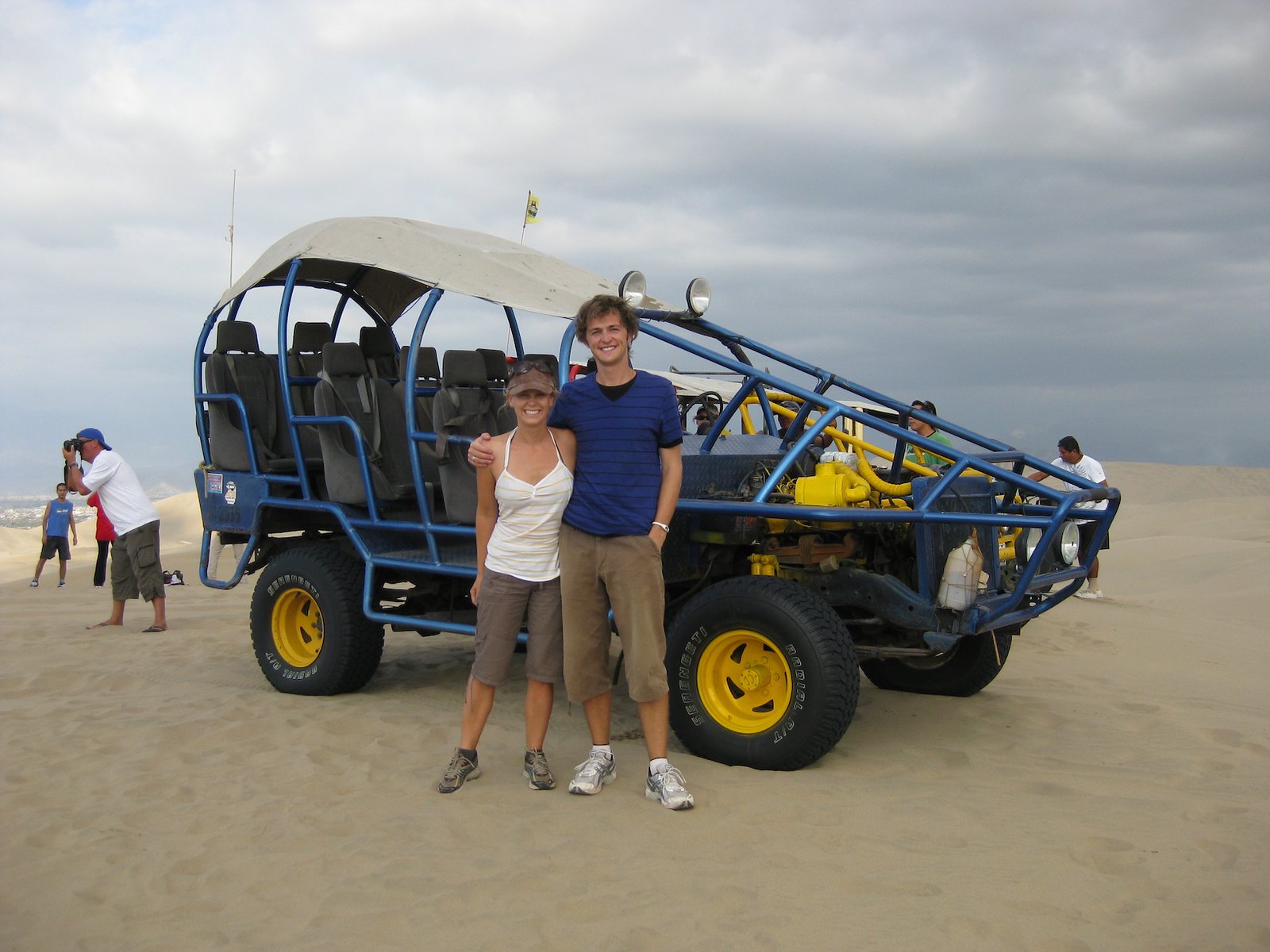 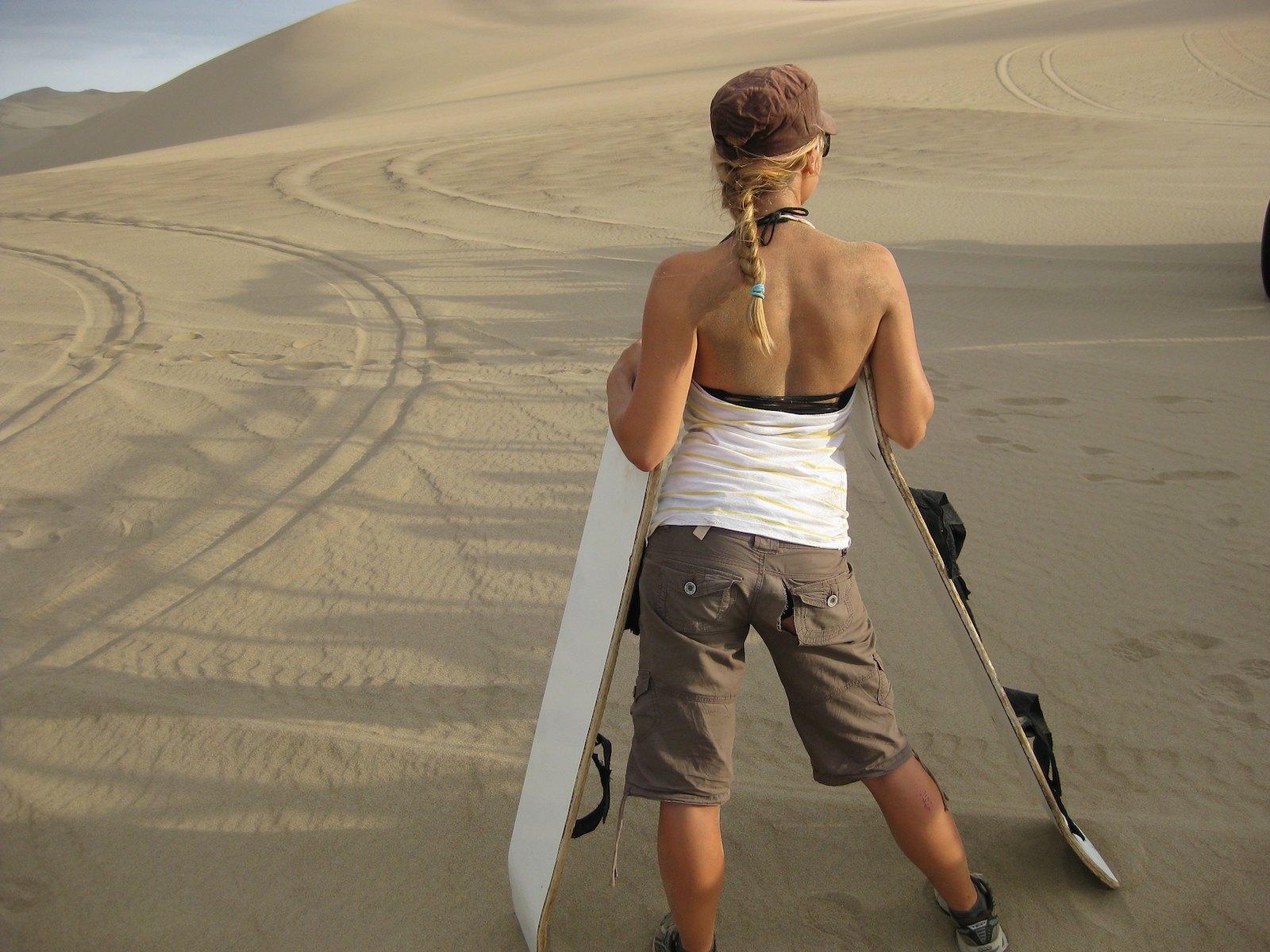 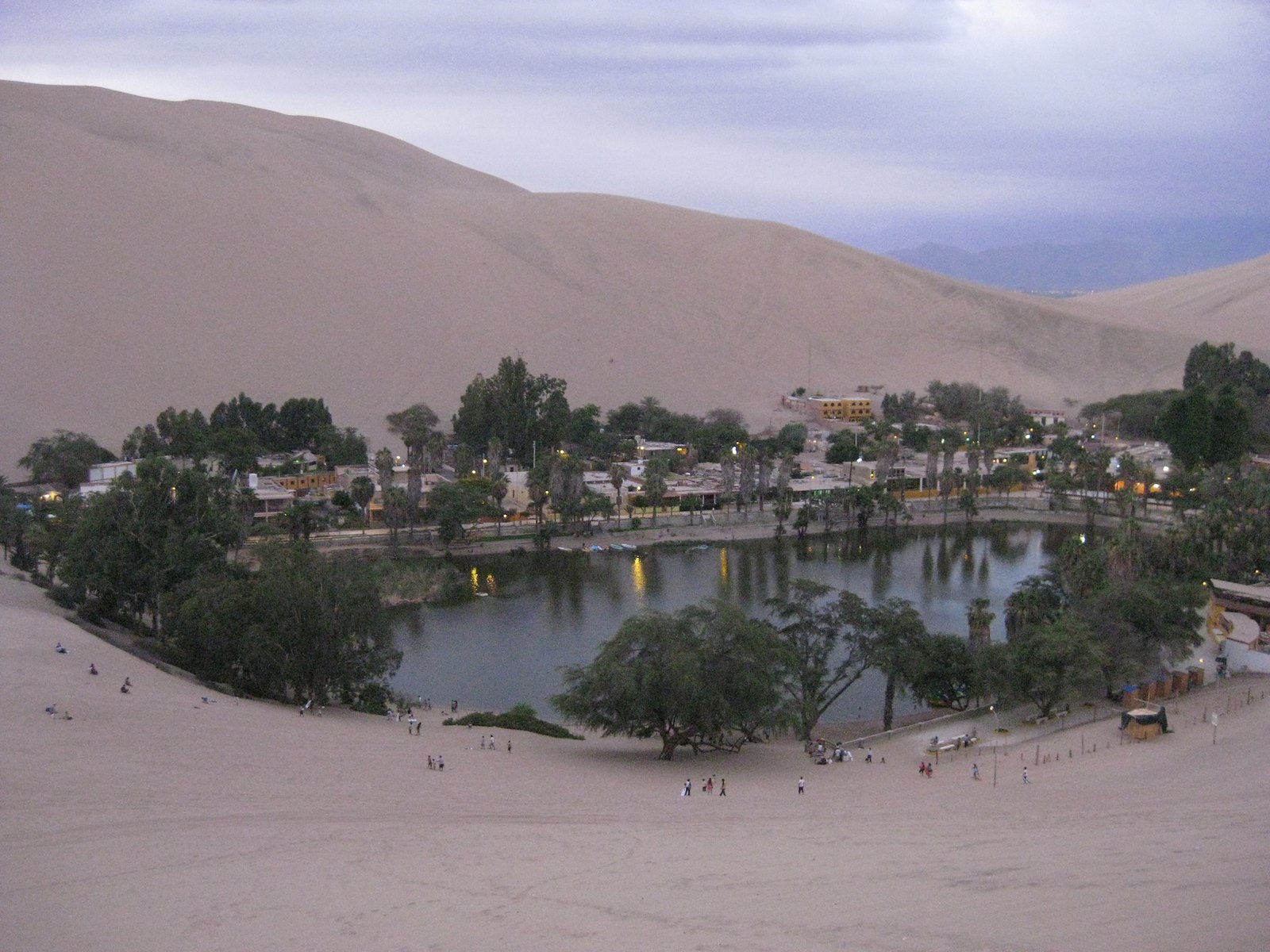 Next up was the Nazca Lines. We did the 35 minute flight over the lines and this is an experience that is not to be missed as the lines can only be seen from above. They are quite amazing when you realize that the stones were placed there by a pre-Inca civilization. They include a very detailed monkey, a spider, a tree, a hummingbird, (strangely) an astronaut, and many more. Though the lines were much smaller than I expected the plane ride was a lot of fun and spotting the formations before the pilot pointed them out was a rush. 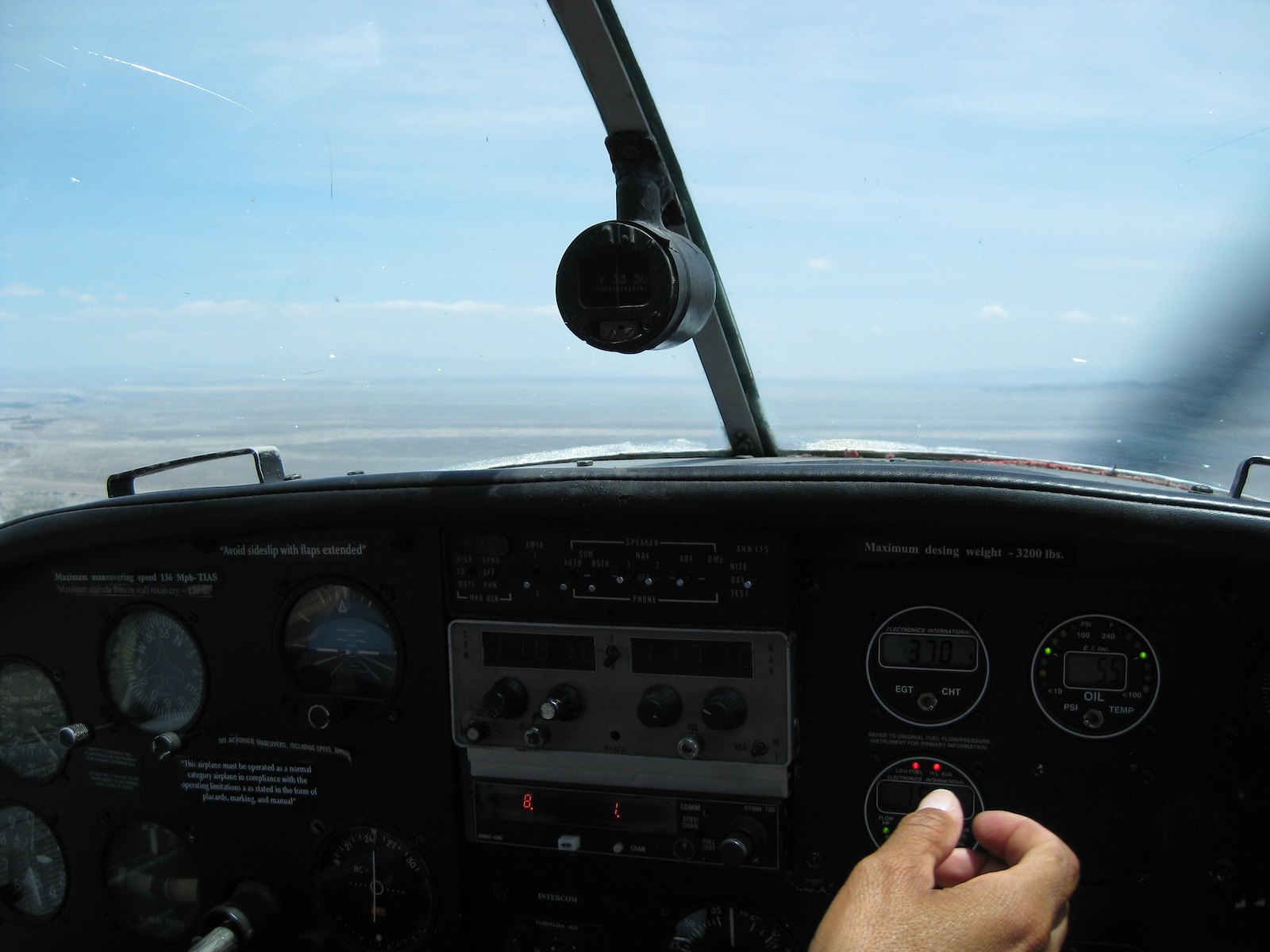 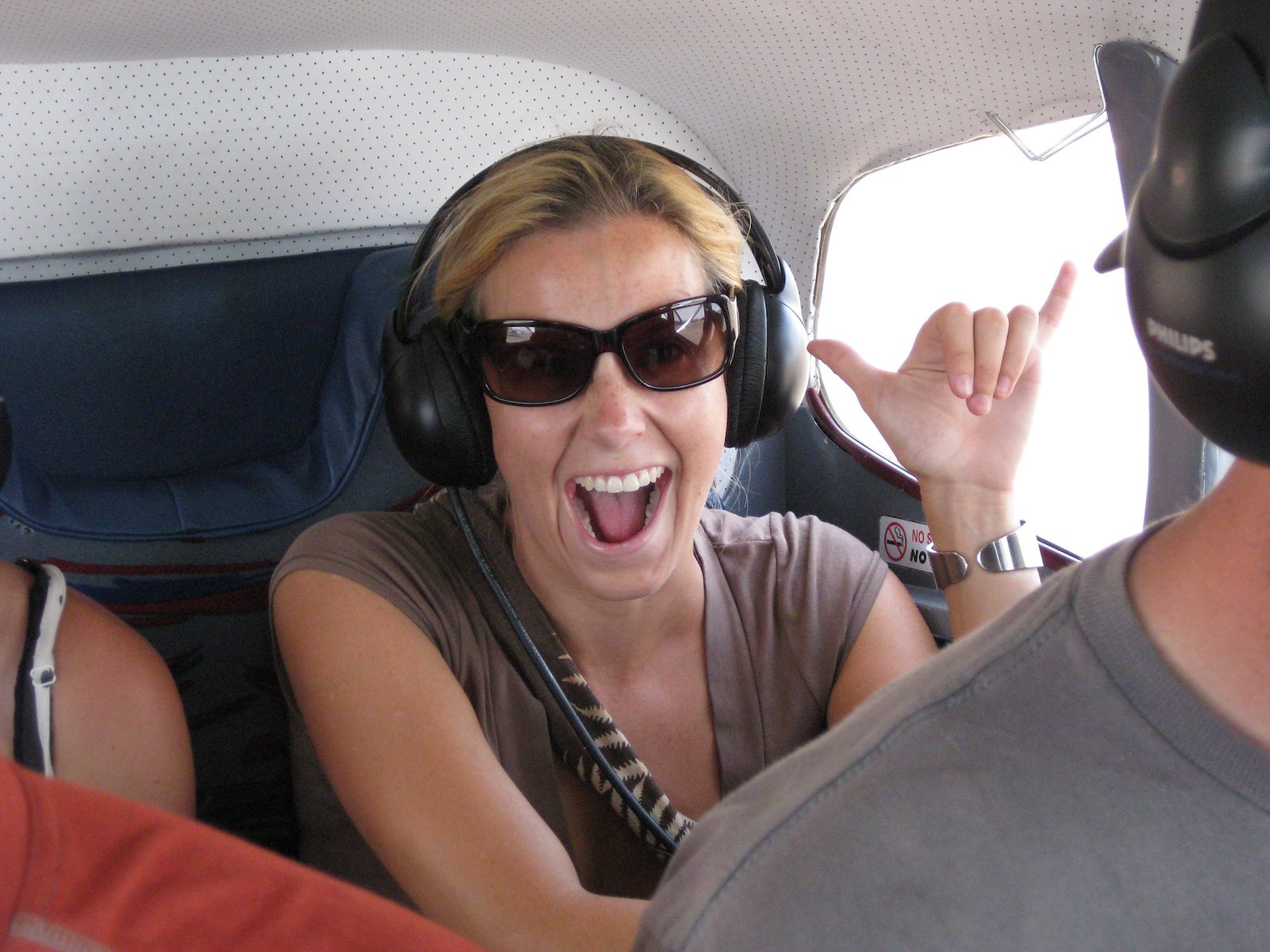 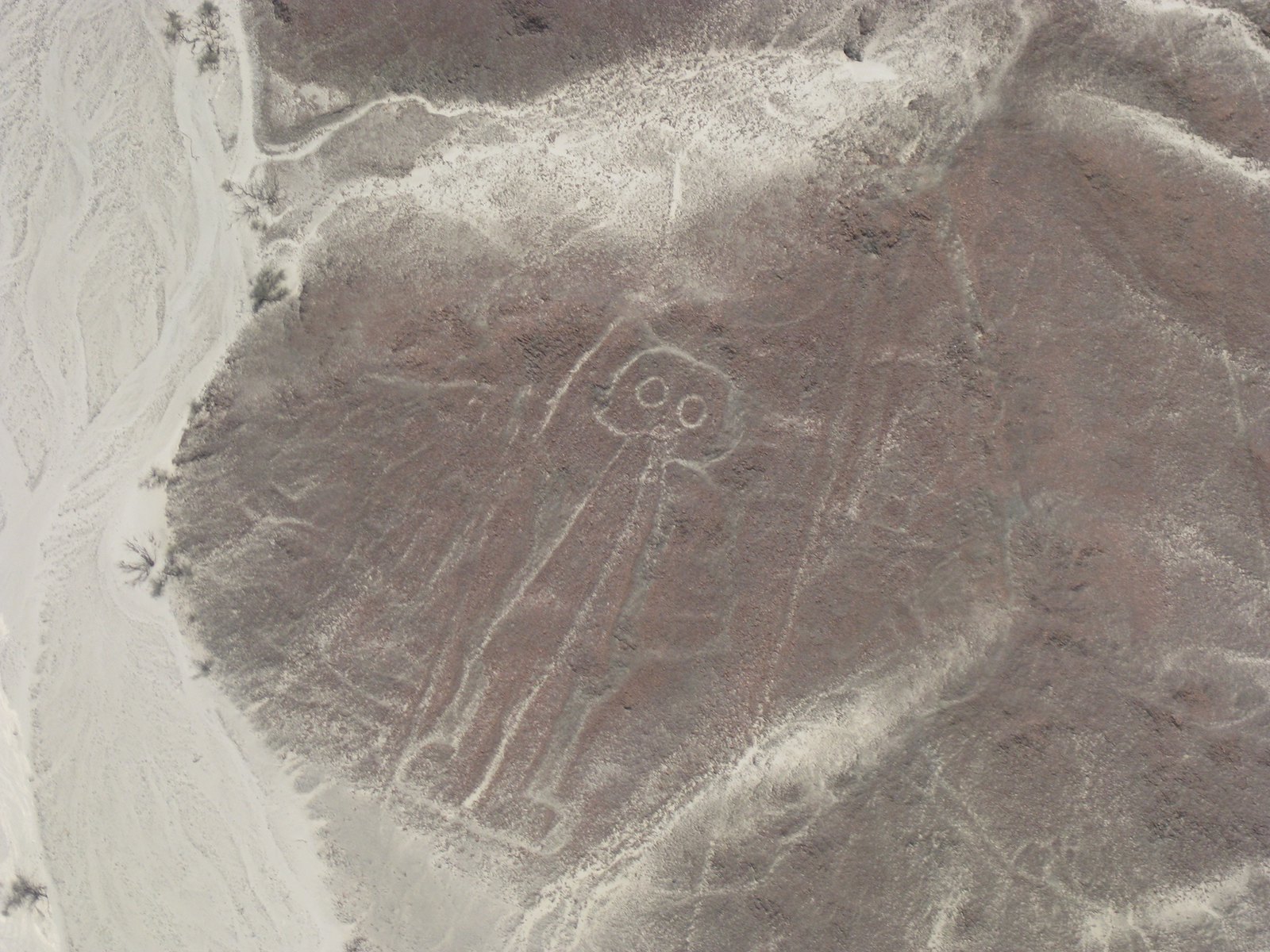 Colca Canyon was incredibly beautiful, this was a great surprise as most of Peru isn’t. The desert surrounding the coast is simply several hundred kilometres of ugly brown low mountains (except for the sand dunes near Huacachina) and we were ready for some natural beauty. We spent a couple of nights in Cabanaconde (at 3287m) and did a day hike into and out of the canyon (down to 2180m). This hike was really very hard. The downhill was tough on the joints and the uphill was so incredibly hard cardiovascularily – I hope that gaining 1100m in just under two hours would be tough for anyone! But the amazing vistas offered from the hike, as well as the refreshing pools at the bottom made this an incredibly rewarding day. 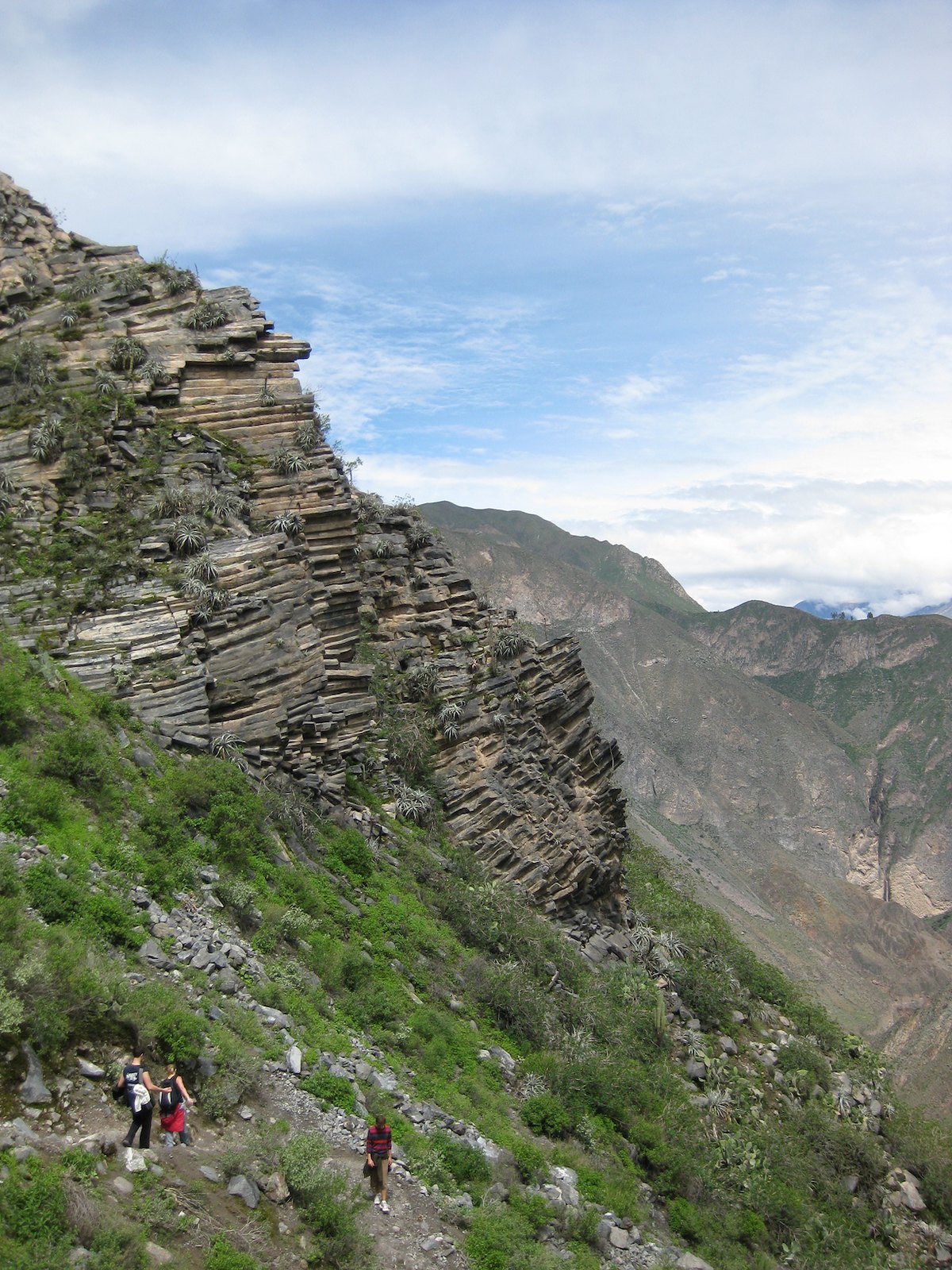 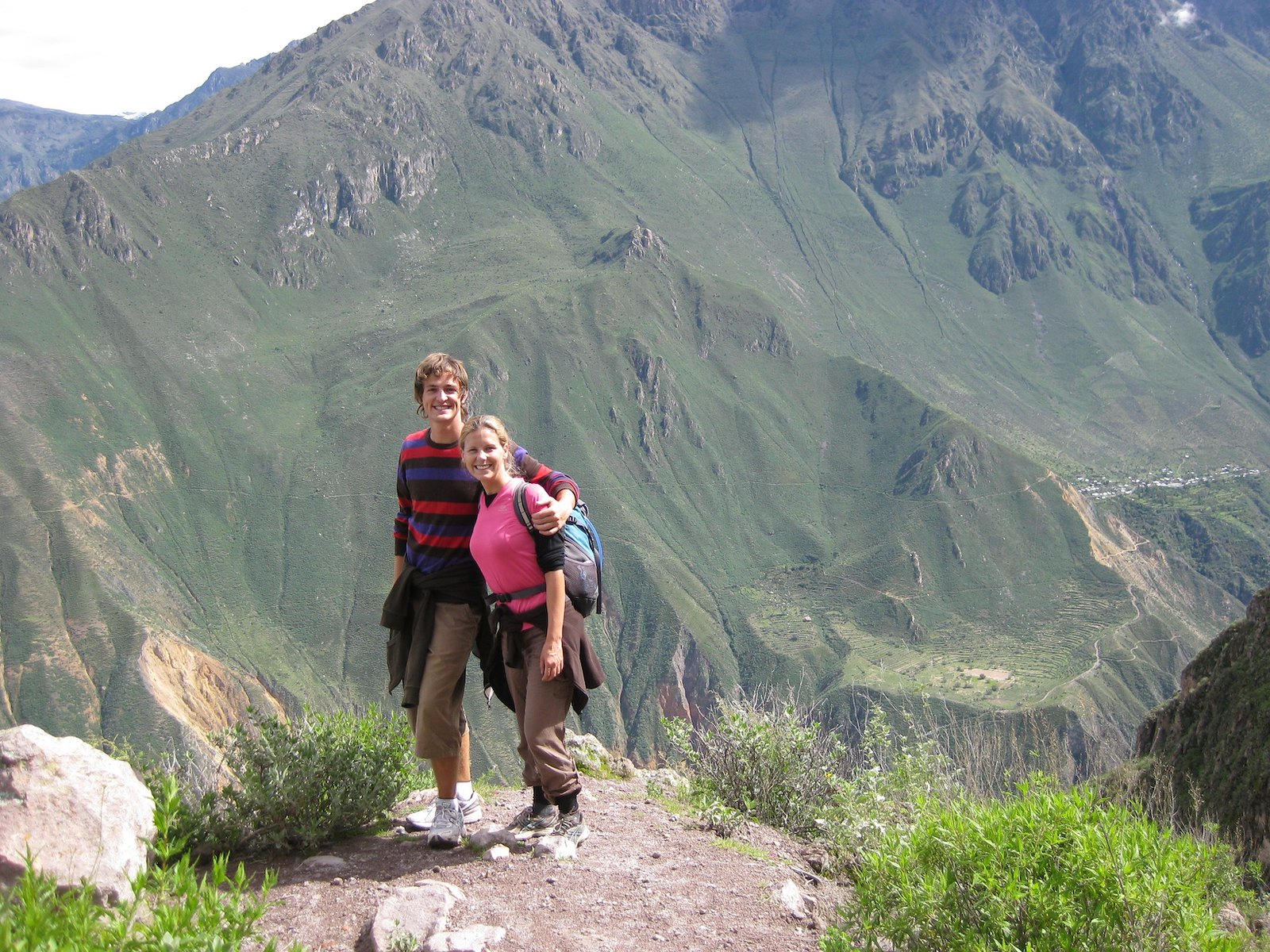 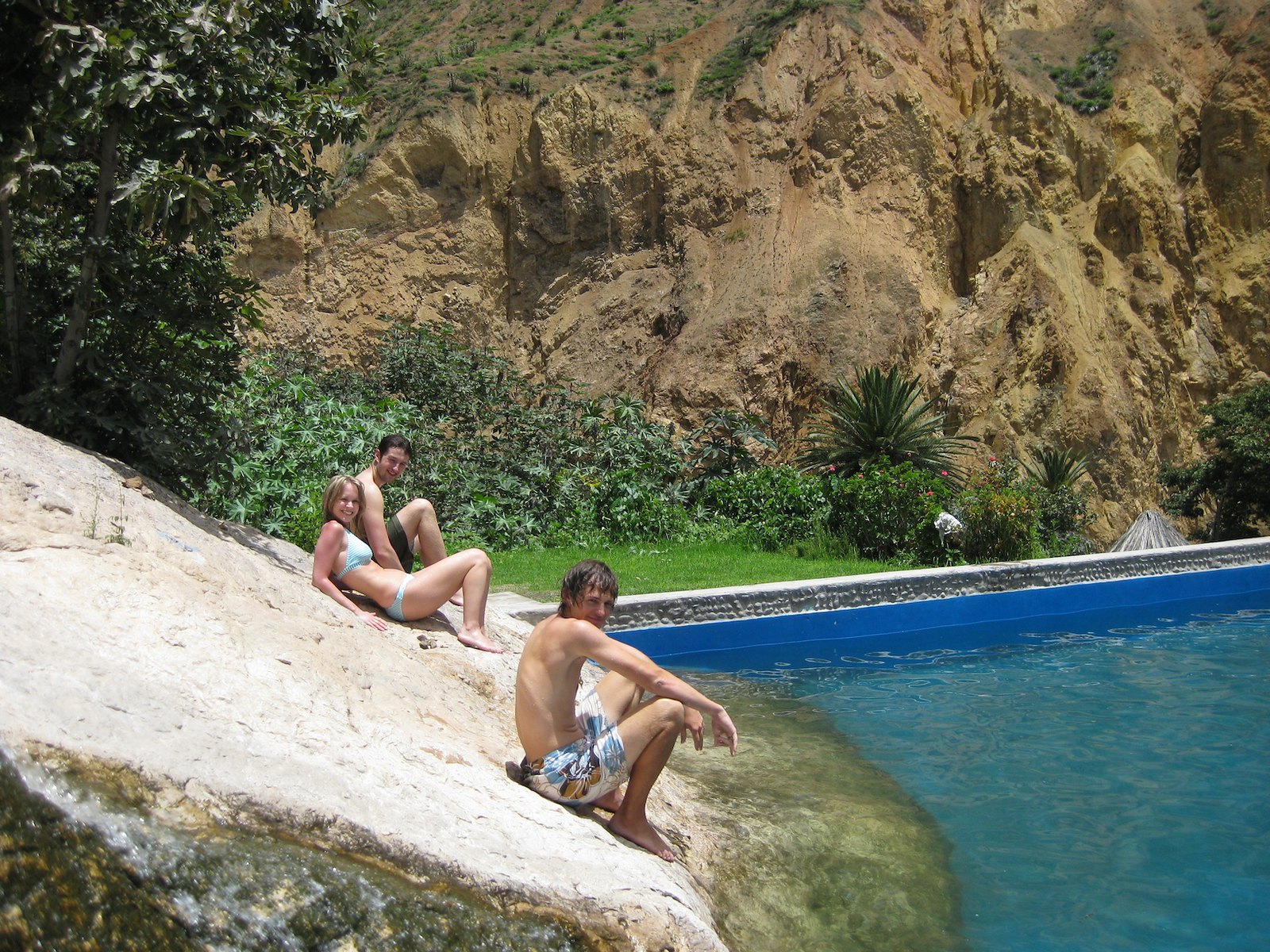 Colca Canyon was really just training for the 4-day, 3-night Inca Trail to Machu Picchu. We have heard that for many people Machu Picchu is the defining moment of their trip to Peru, and often even their trip to South America. We can attest that this Inca site is simply the most incredible. Its misty mountain location just screams of mystery, and this is fitting since no one really knows exactly what was its purpose. Machu Picchu was made even more rewarding by the fact we toiled for four days up and down mountains, at altitude, to get there.

The Inca Trail was an experience that I will never forget. The path threads up and down through mountain passes and valleys the highest and lowest respectively at 4200m and 2600m. Every several kilometres along the walk are breathtaking yet abandoned Inca sites visited by only about 200 people per day. As an employment initiative, you are only allowed to do the Inca Trail in a guided tour group and this group includes porters and cooks. The great part about this is that in arriving at your camp the porters have set up your tents and the eating tent, they also cook for you. Basically, other than walking, and rolling out your mat and sleeping bag you really have no work to do. The food on the Inca Trail is plentiful, it includes 3 huge meals a day plus tea with popcorn and a bagged snack. If you take a cheaper tour, as we did, you are required to carry your own pack (minus the tent) but this just makes the four days all the more rewarding. The sense of accomplishment you feel as you spot Machu Picchu from the Sun Gate on the fourth morning of the trek is a feeling that can’t easily be beat. The fact that you spend the rest of the day in this wonderful site makes a great end of the trek. 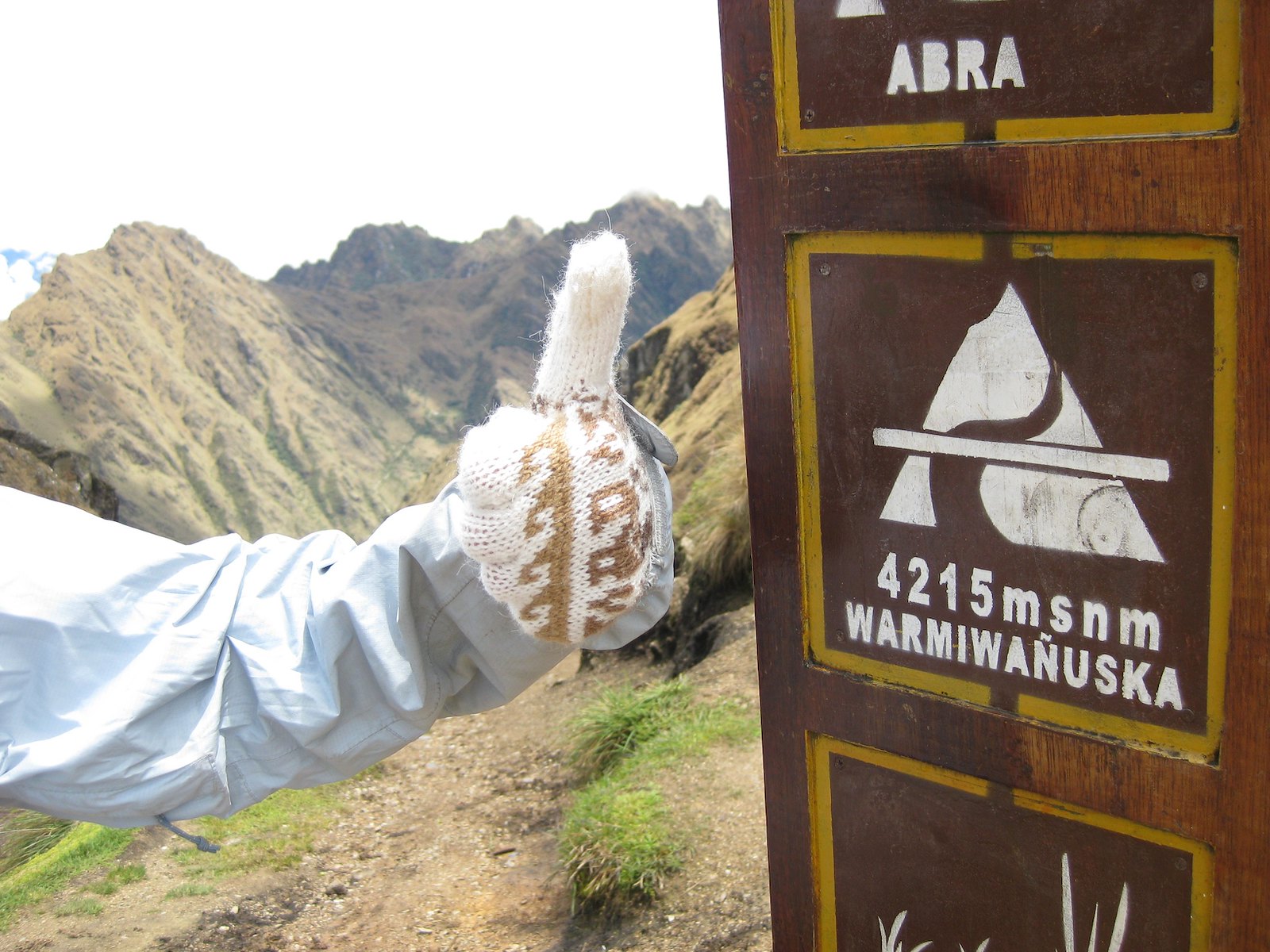 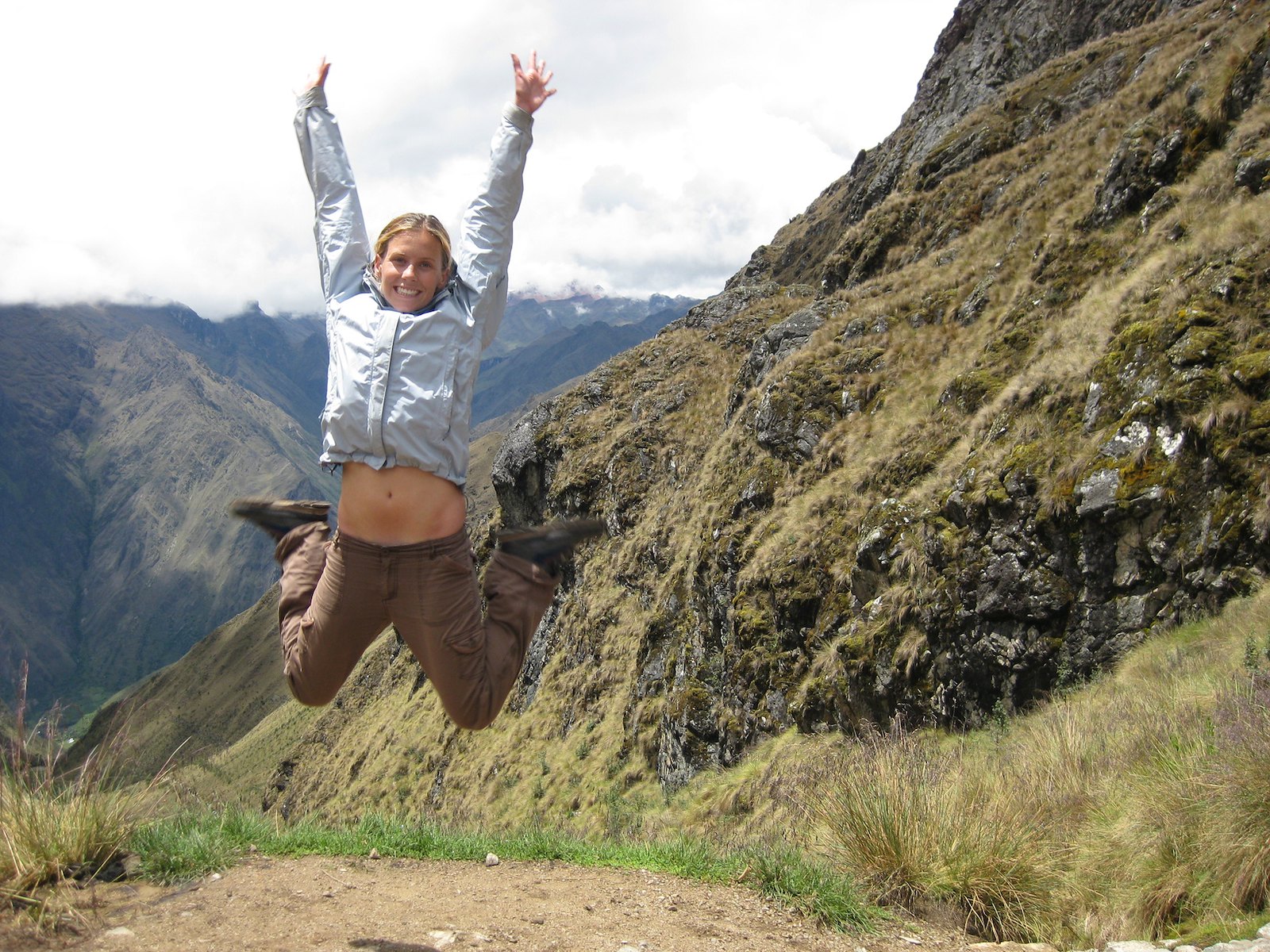 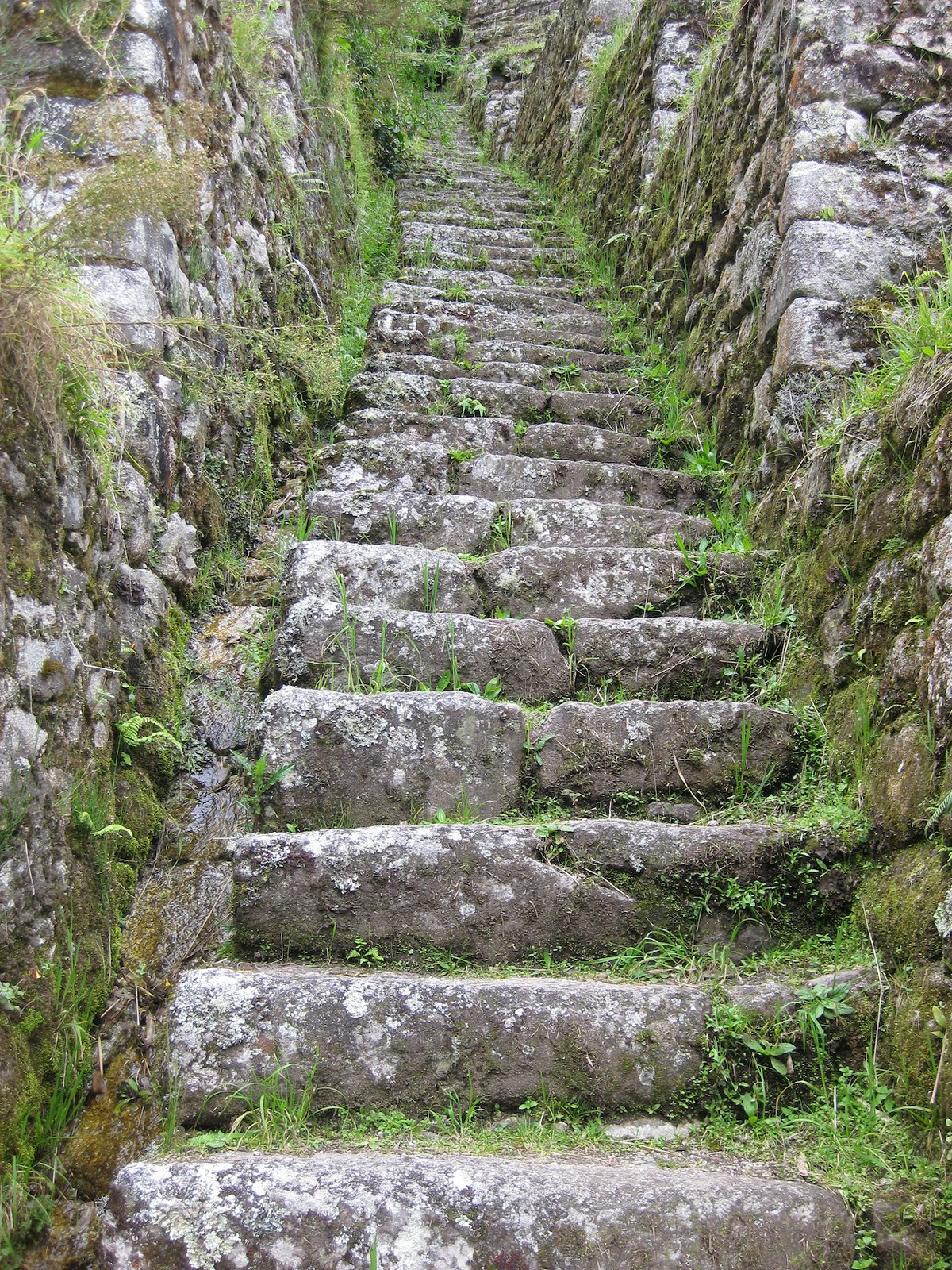 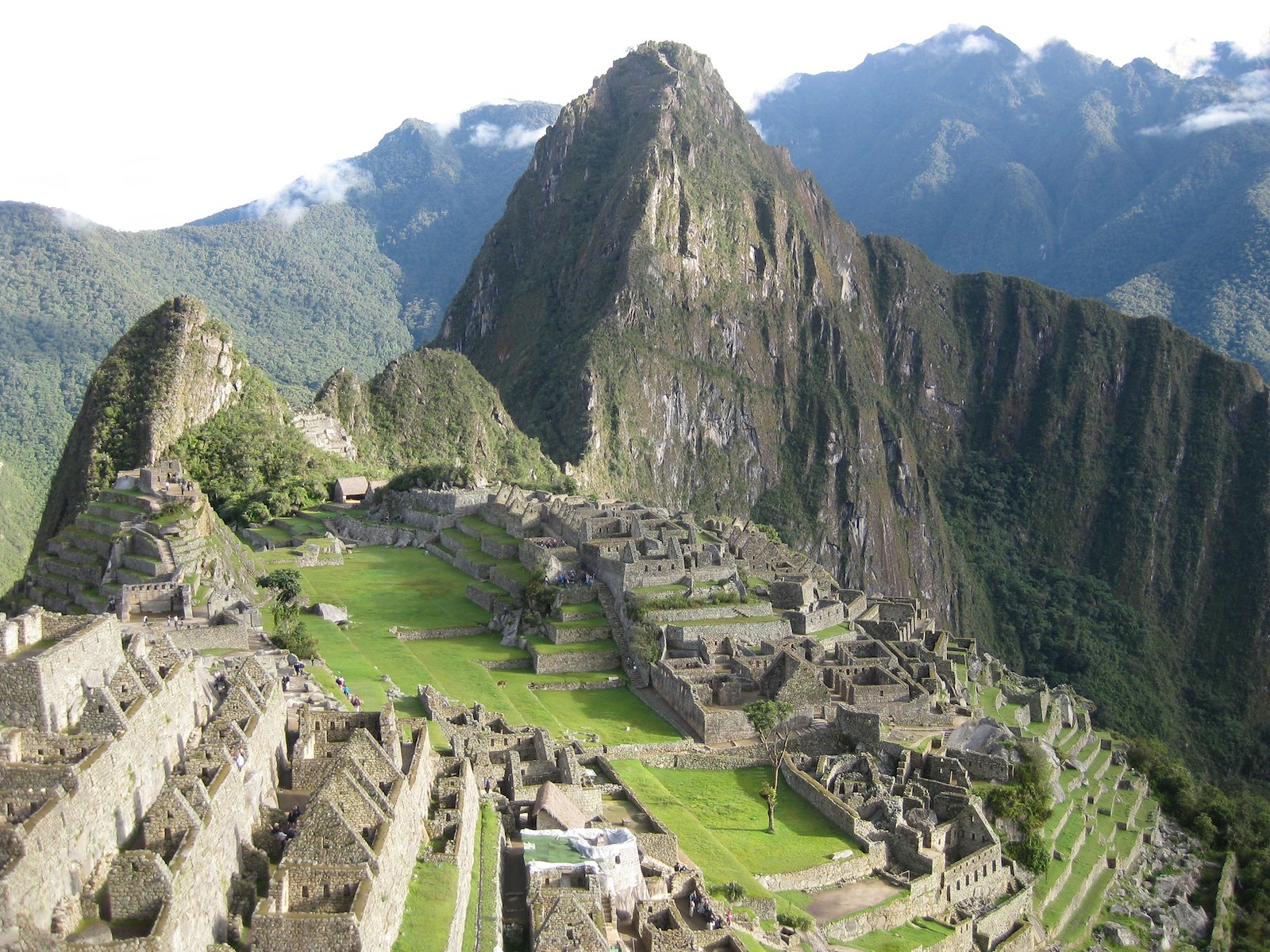 Our last couple of days in Peru were spent getting to and in Puno. We took a tourist bus to Puno, that stopped at four sites along the way and included an awesome buffet lunch. At one of the sites we got to play with llamas and alpacas! On our last day in Peru we saw the entirely unique floating islands. Los Huros (the islands) are man-made with totora reeds and float on totora reed root systems. Though the tour was about 2 hours too long, it was great to see something we haven’t seen anything like before! 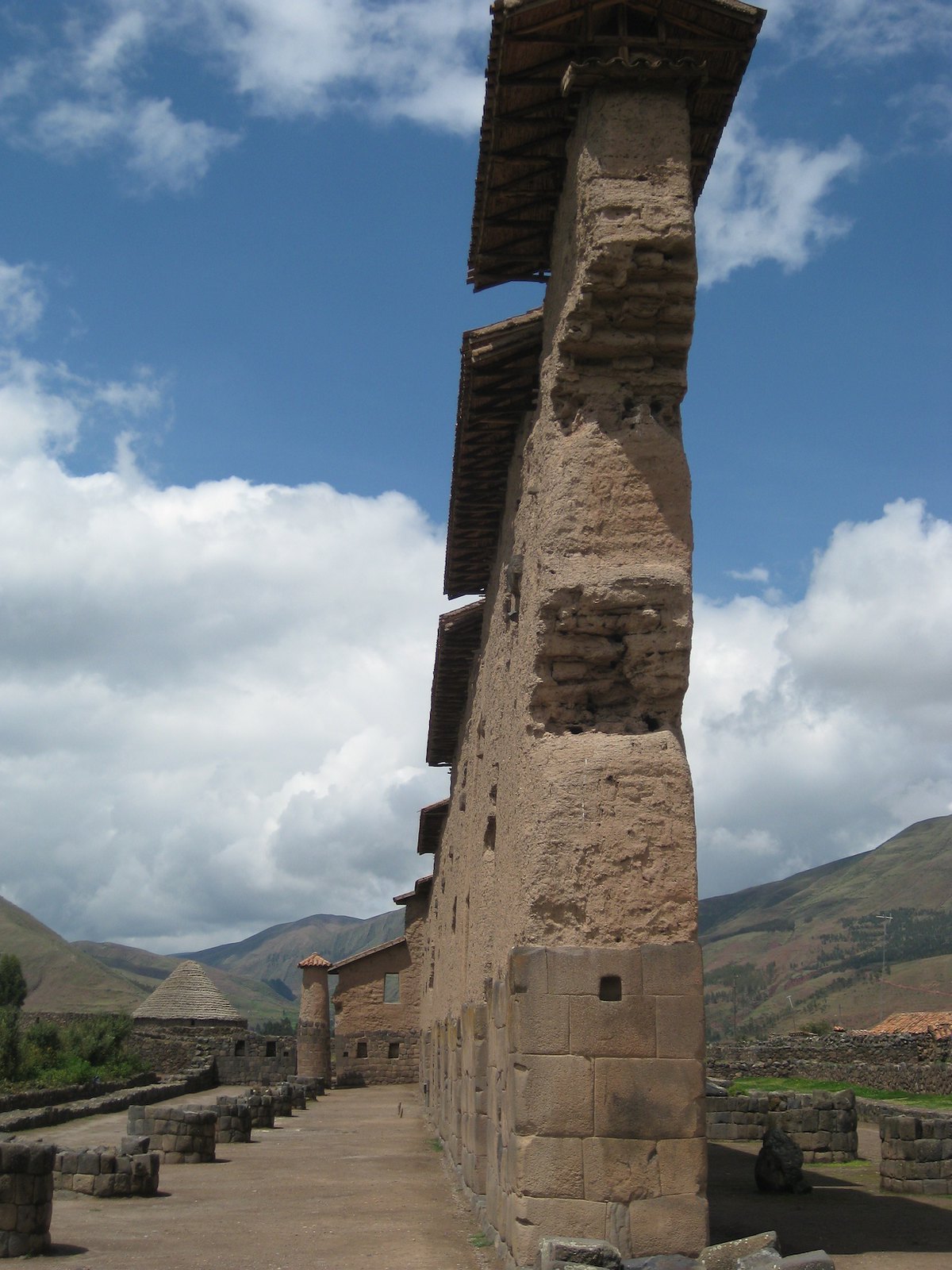 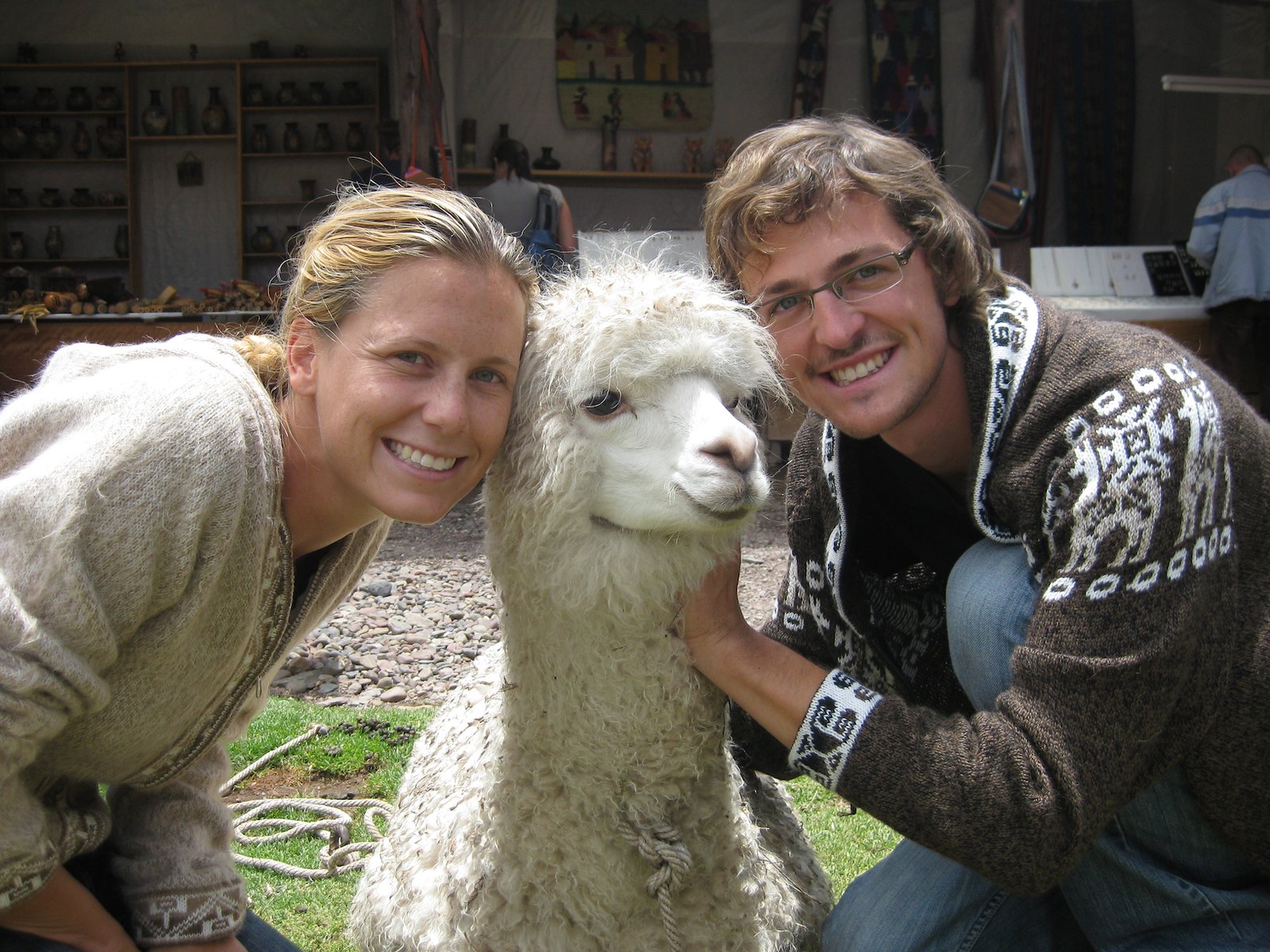 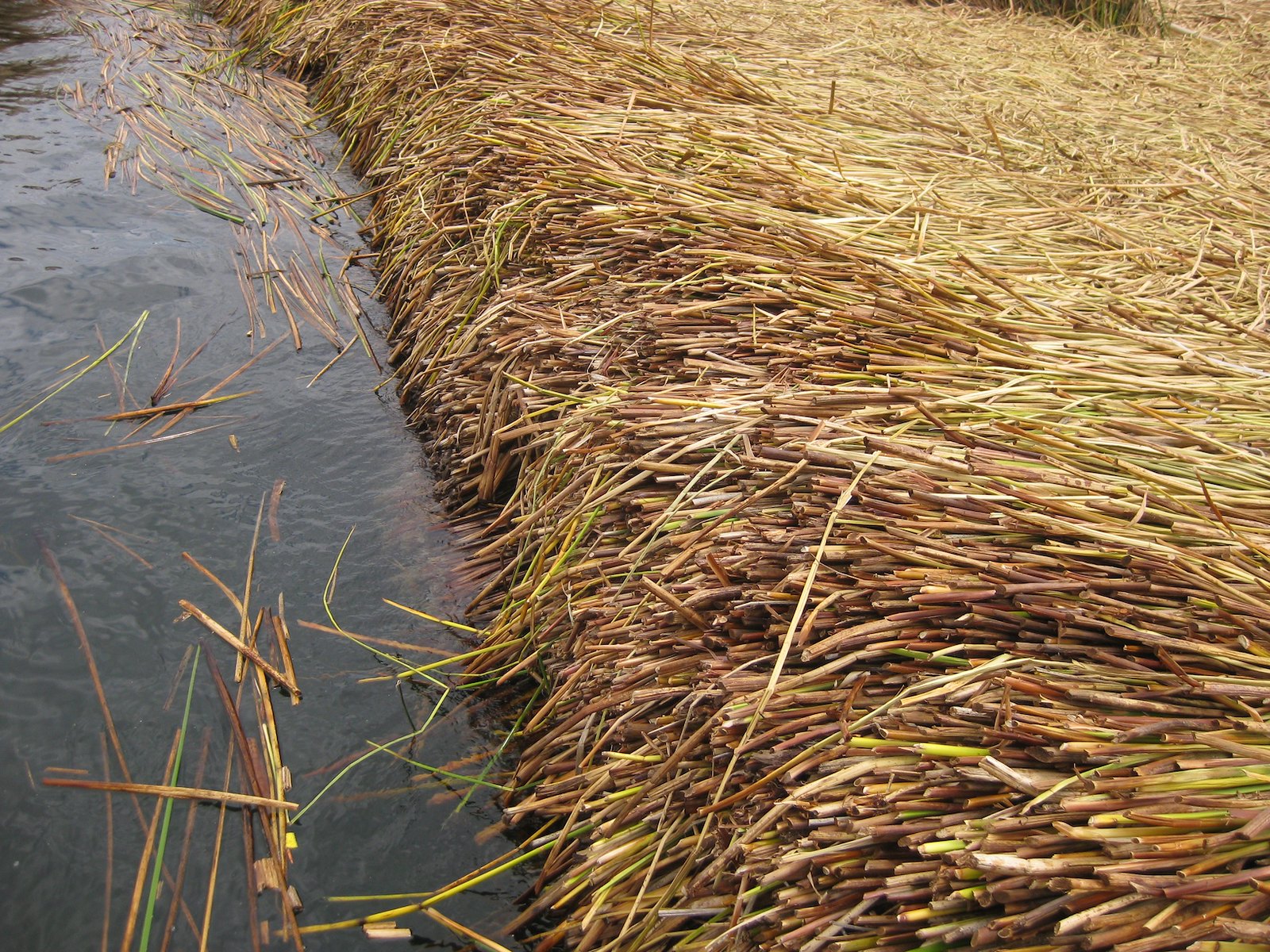 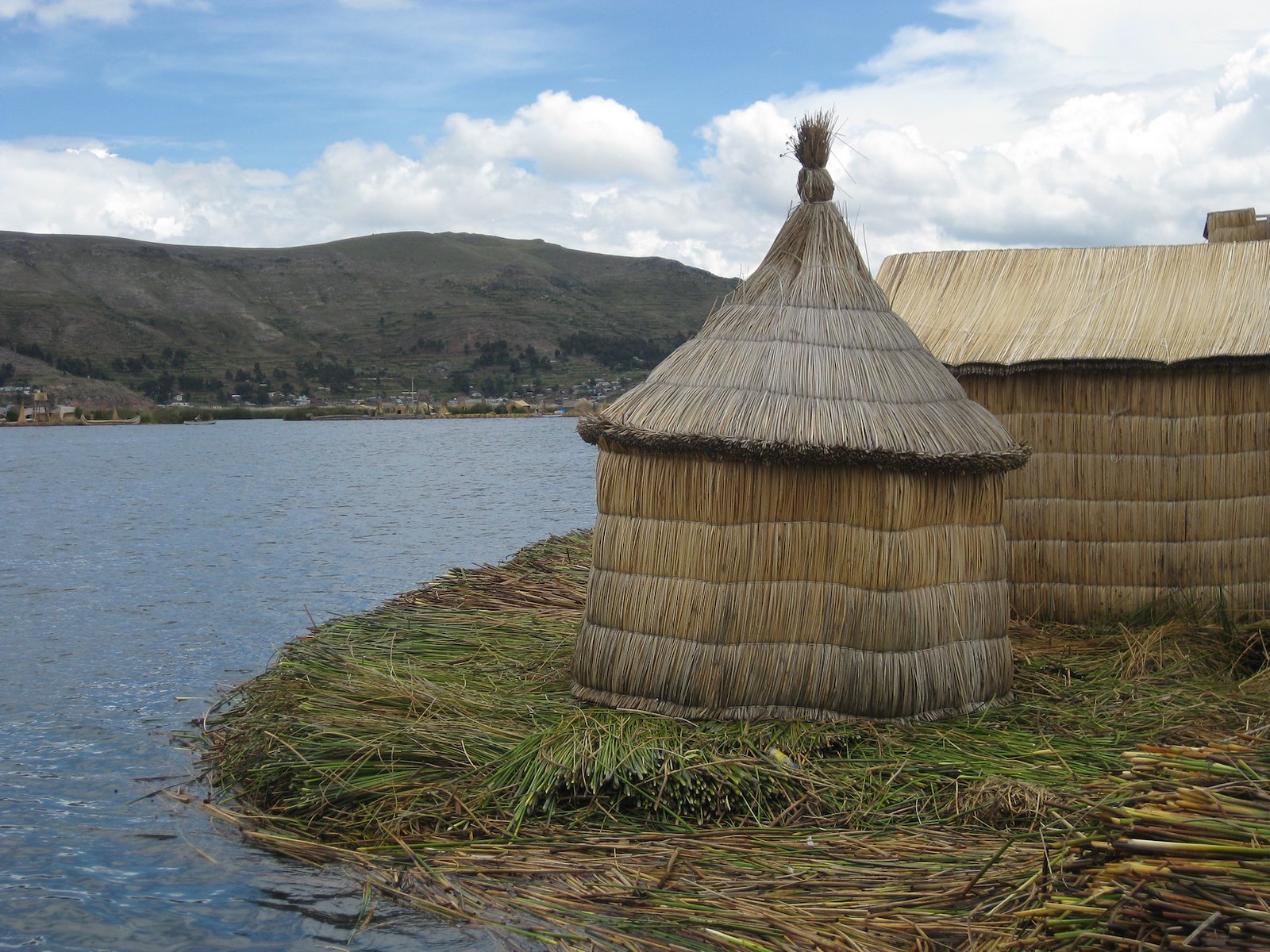 All in all, Peru was full of highlights – some of the most amazing sights that we have seen in our 307 days on the road!