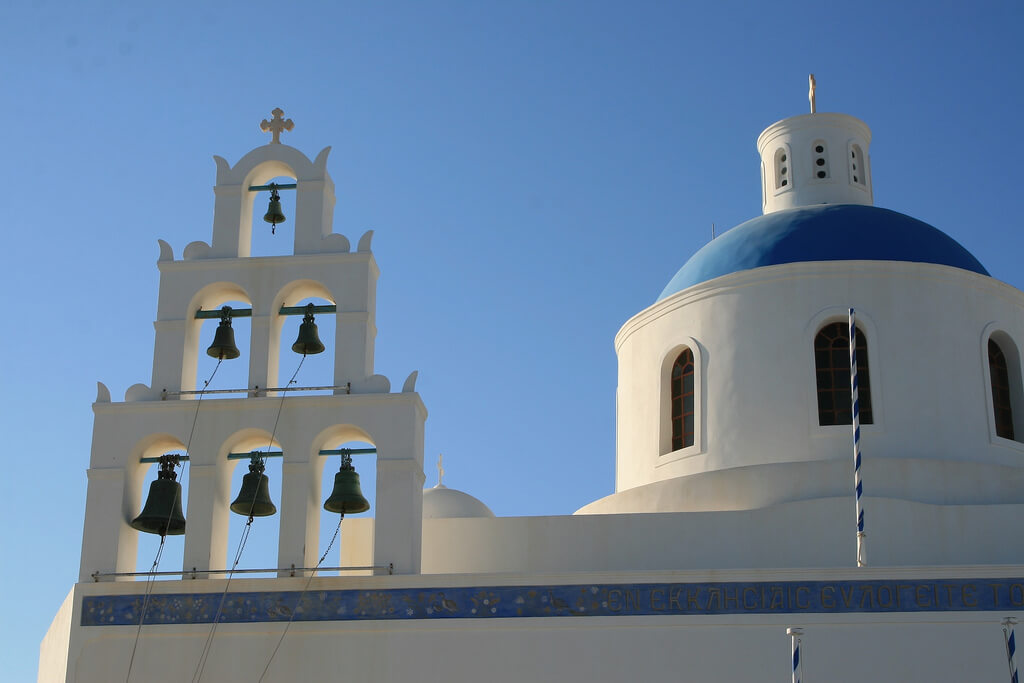 Santorini We were hoping to arrive in Santorini on a slow ferry during the day but due to high winds our mid-morning ferry was cancelled (which we didn’t realize until 1pm, we just thought it was two hours late). Luckily there was another boat going later, arriving at about 9:30pm (Greek ferry time = 10:45pm).

We had a harder time dealing with the hotel touts here because we had an idea of where we wanted to stay (Perissa), how much we wanted to pay (about 20 euros) and what we wanted to get (wireless internet, a/c and ensuite) but the touts just wanted to pile us in their vans and get home to bed. We ended up doing well on 2/3 characteristics but interestingly in Santorini “yes, I have wireless internet” (when you are at the port) means “yes I have a computer that you can pay to use to get on the internet … wire-less… what is that, I don’t understand” (when you arrive at the hotel). More annoying than that is that these places all have wireless routers – they just don’t know the passwords.

Santorini is beautiful. Fira and Oia, the towns you visualize when you imagine it here are incredible – the sunset from either is breathtaking but I honestly preferred it from Fira where we dined overlooking the caldera as the sun inched below the horizon. 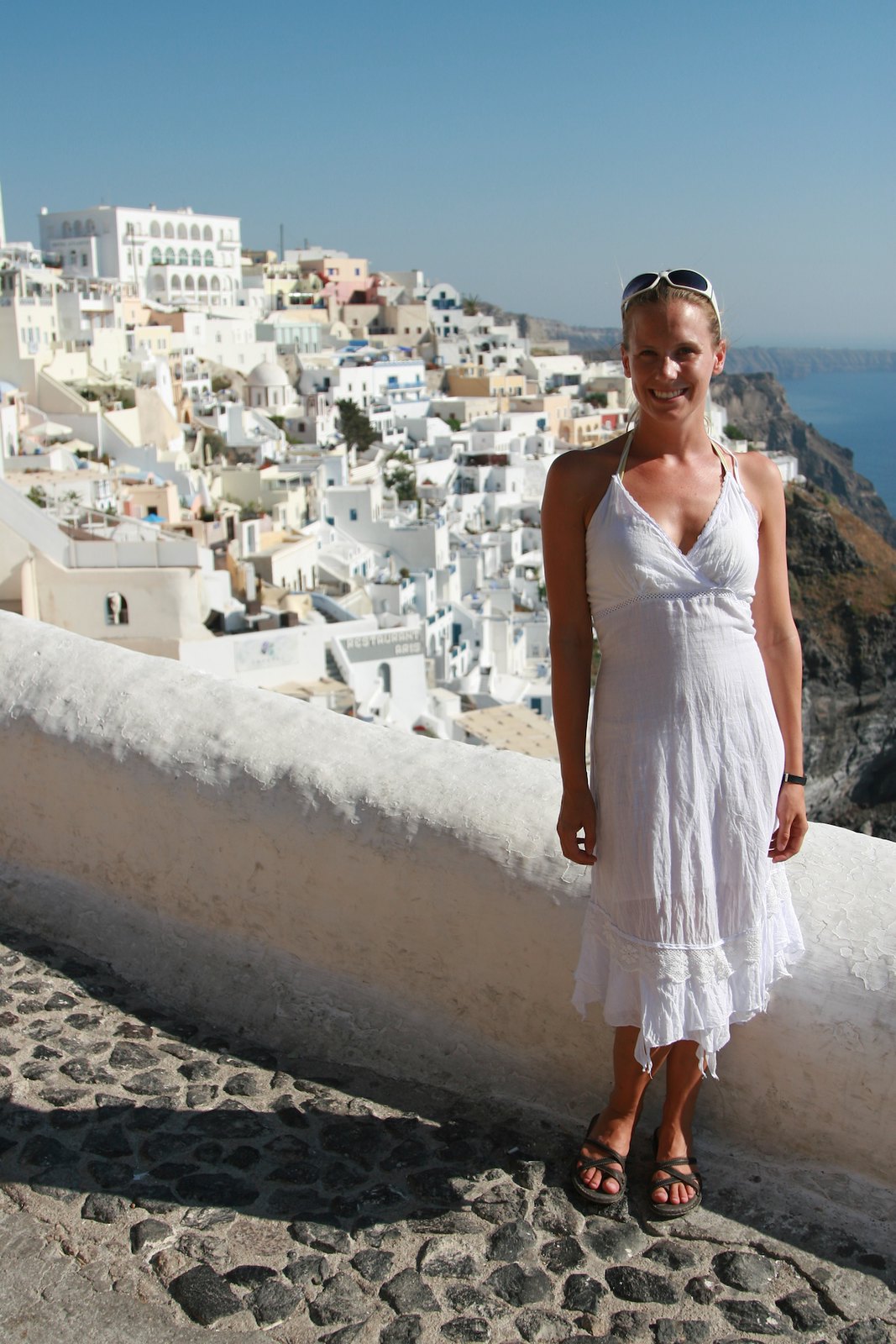 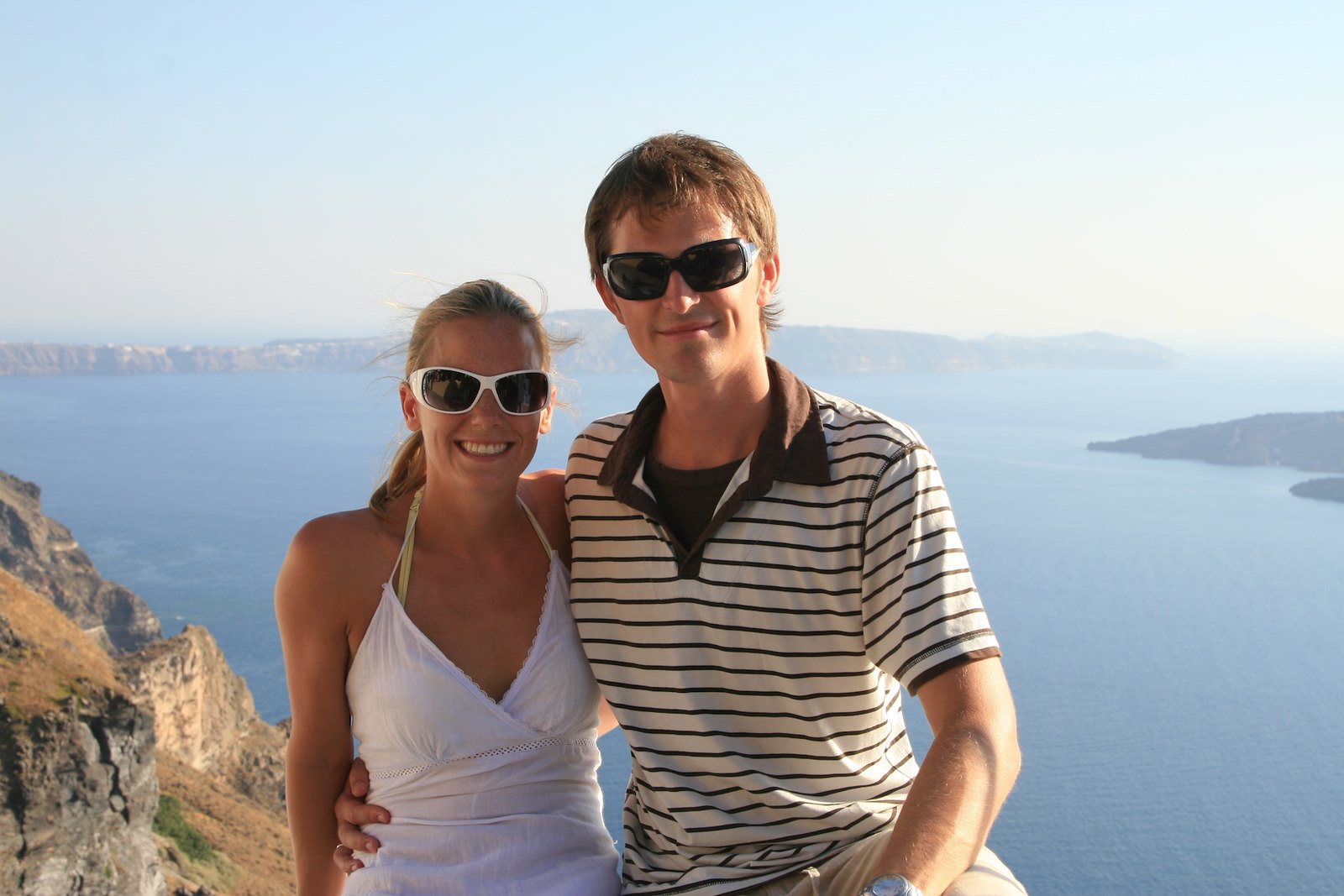 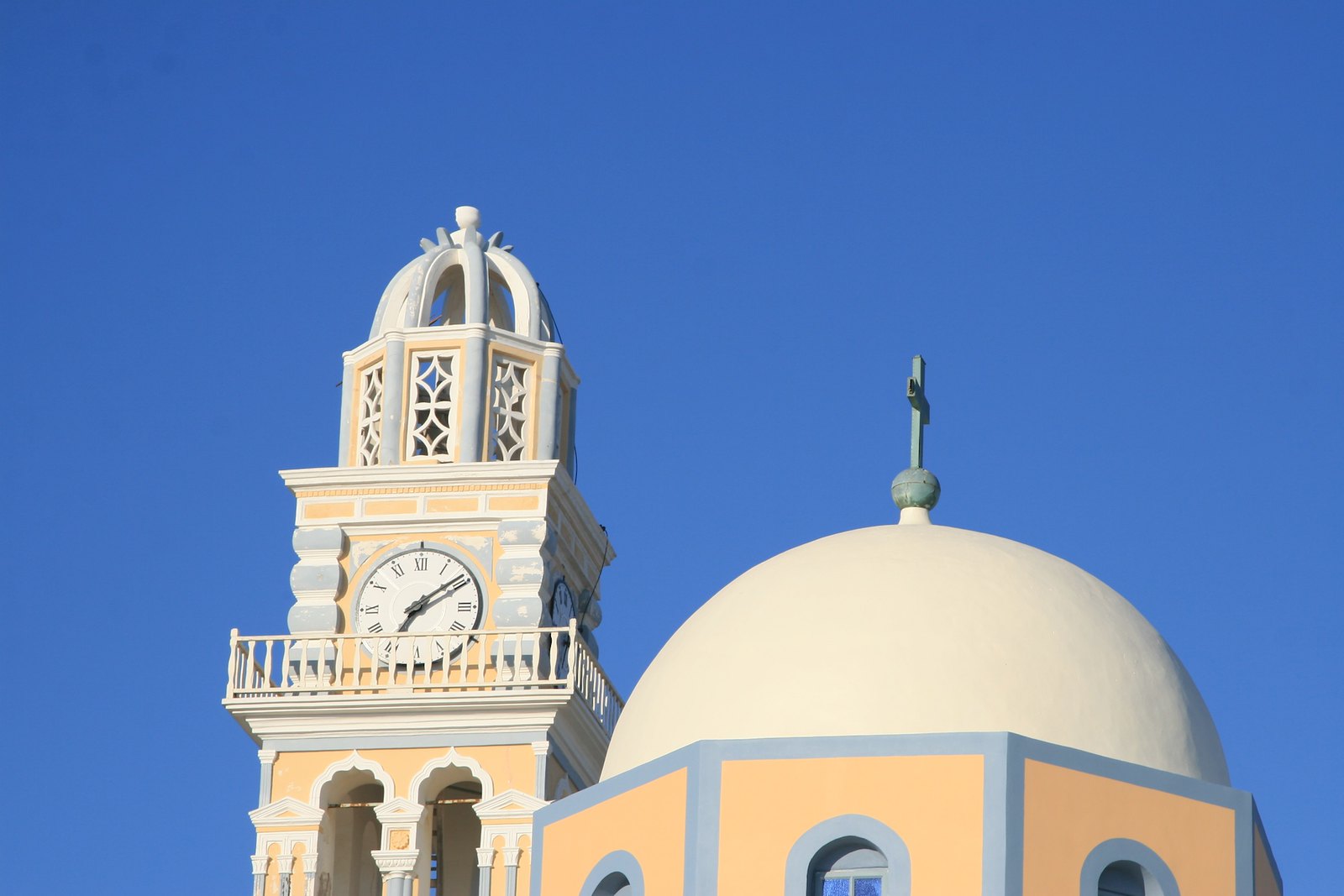 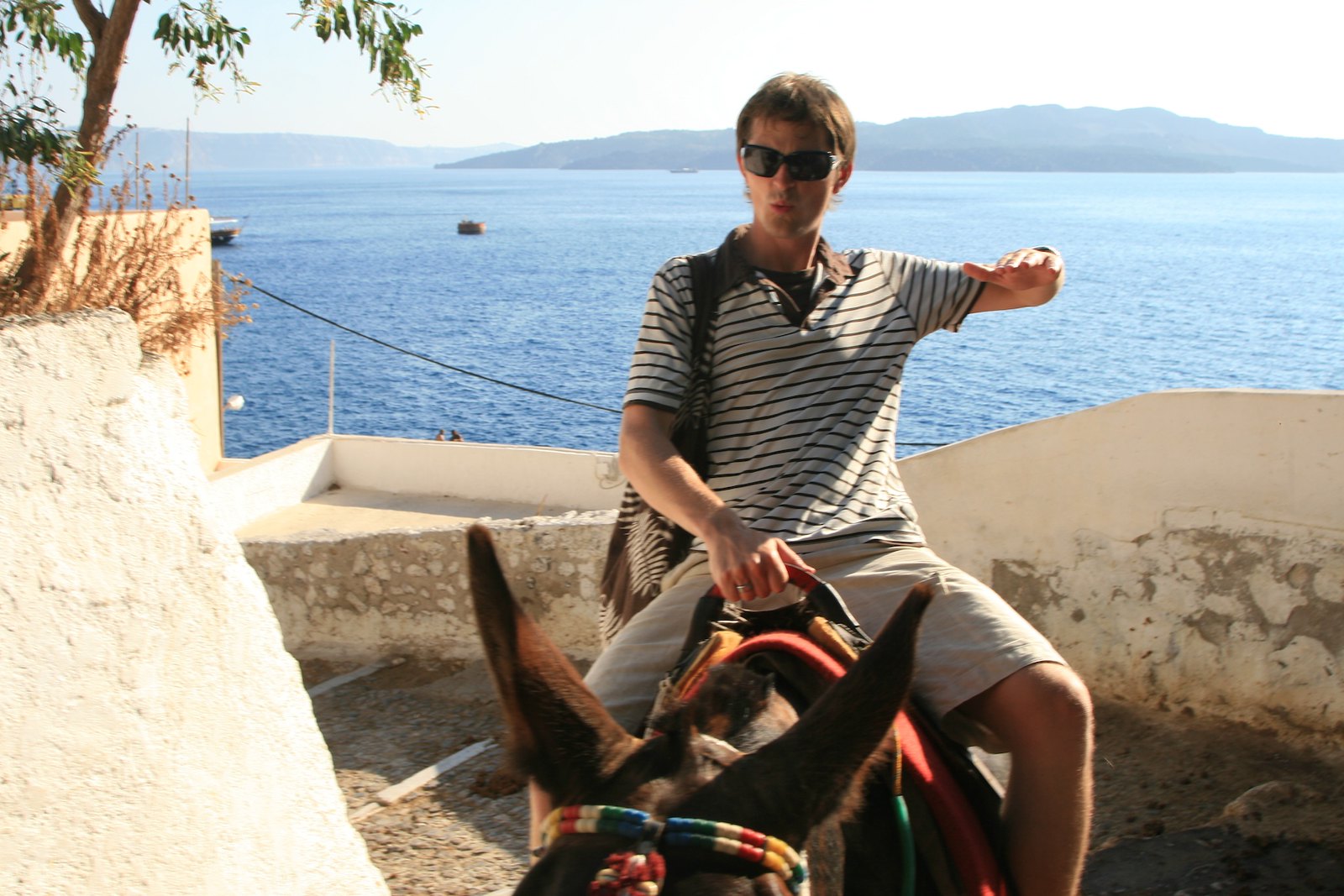 One of our days here was spent on a boat cruise. I could not believe how crowded this cruise was. On a ship not much bigger than our blue cruise boat 72 passengers piled aboard and we discovered that in the high season this boat fits 150. We were taken to the volcano, a brown “hot” springs (25 degrees when it is 32 outside isn’t really so hot) and to Thirassia – the other populated island in this volcanic group. I don’t regret taking the tour but be warned, it isn’t quite the idyllic sailing trip you may expect. 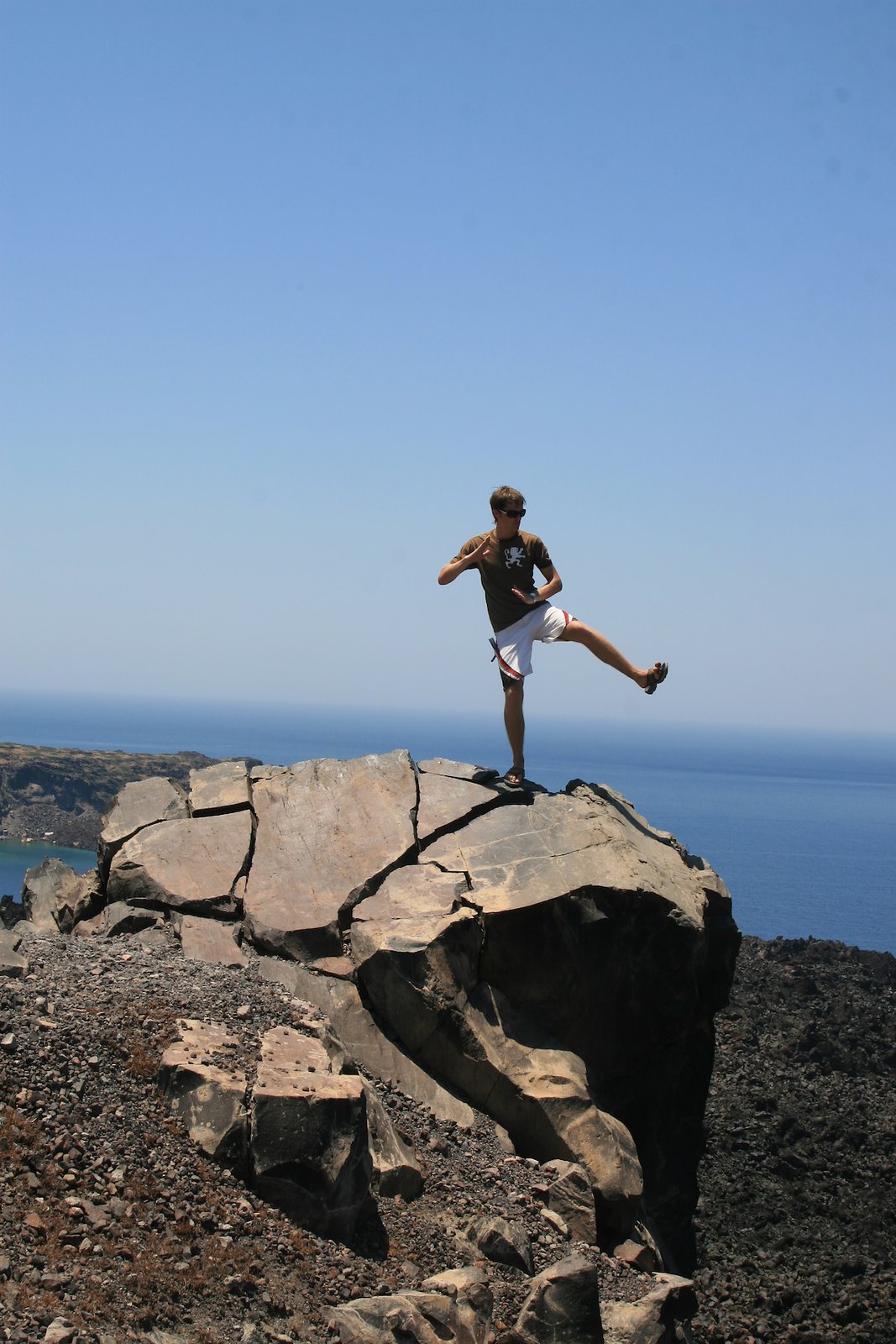 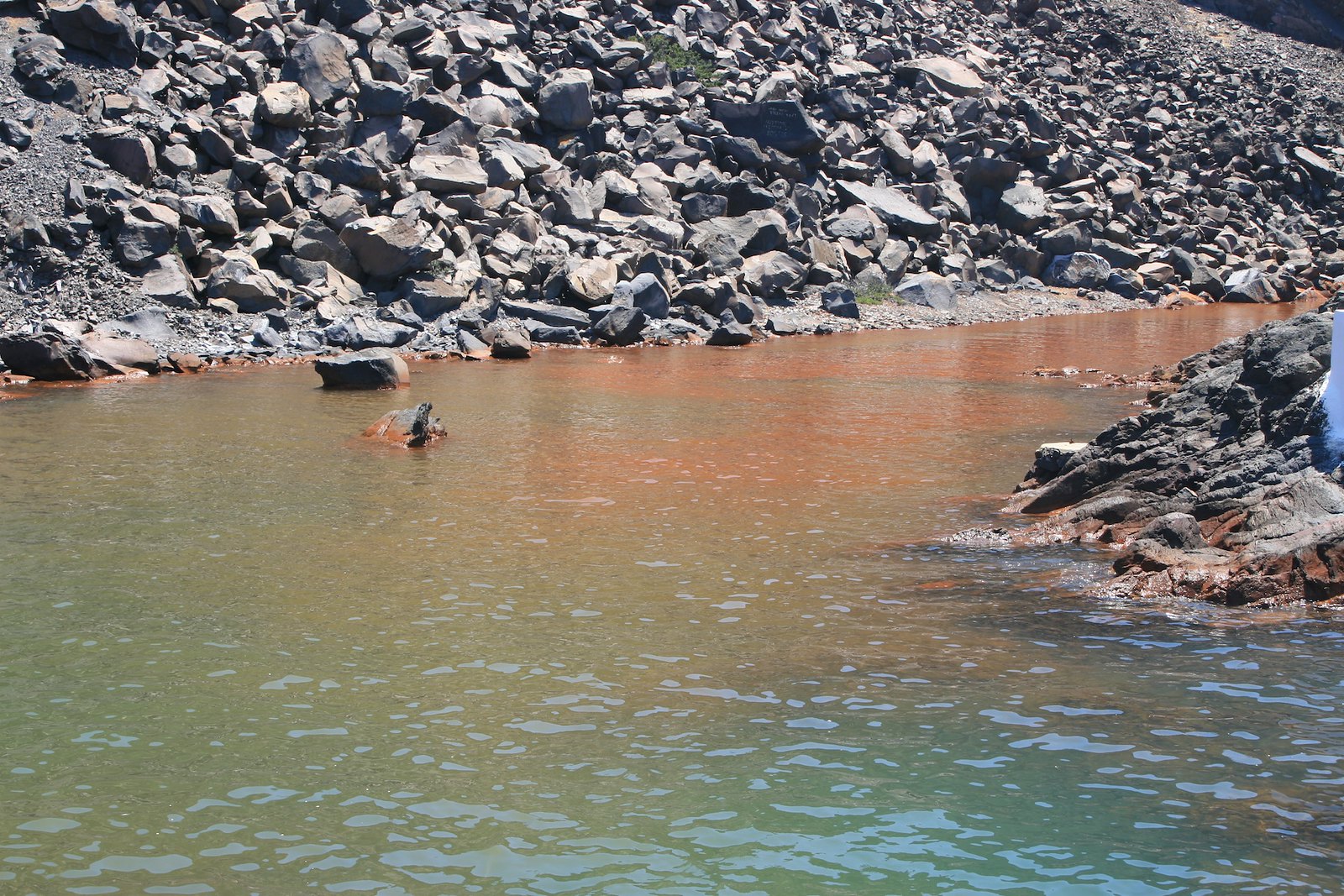 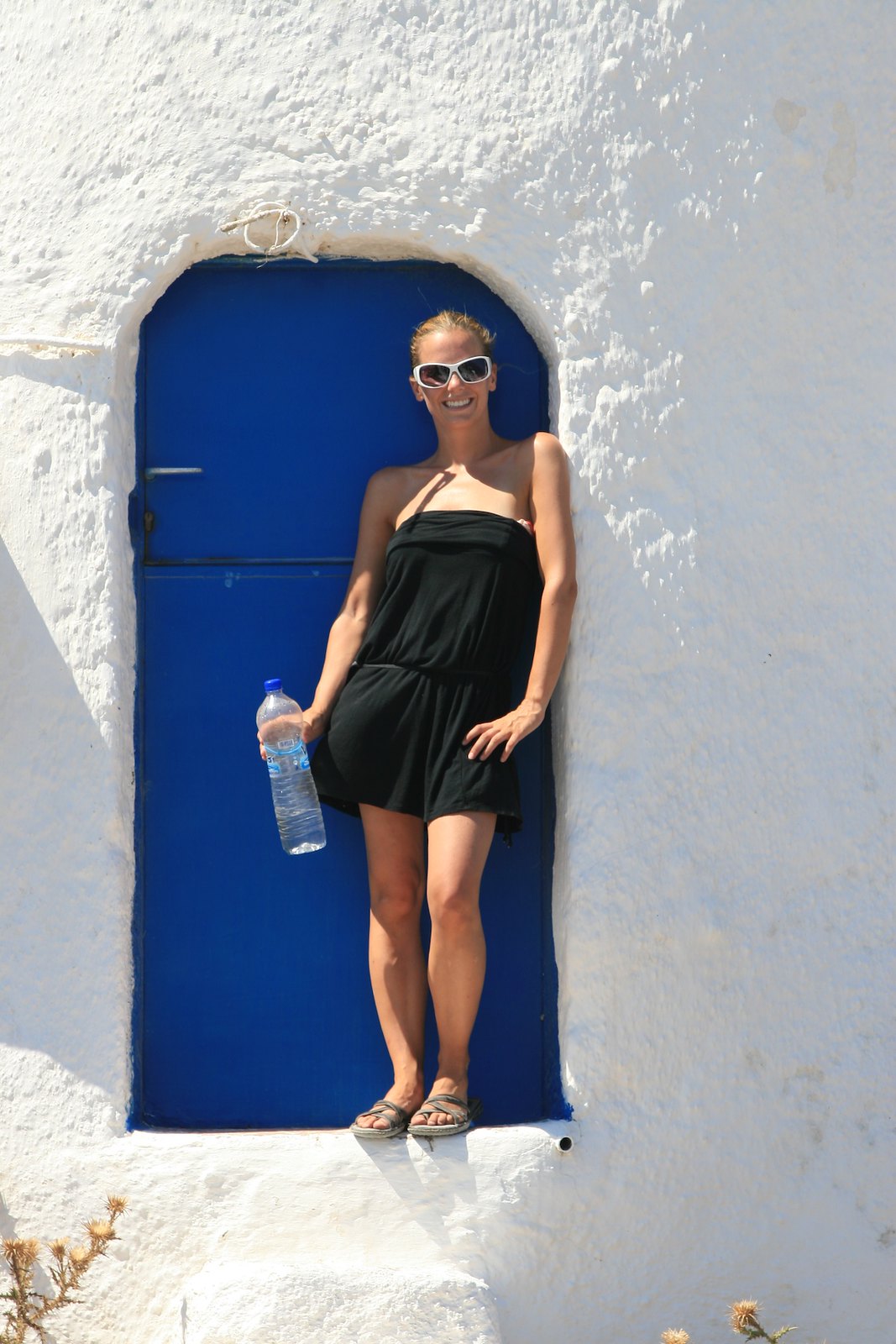 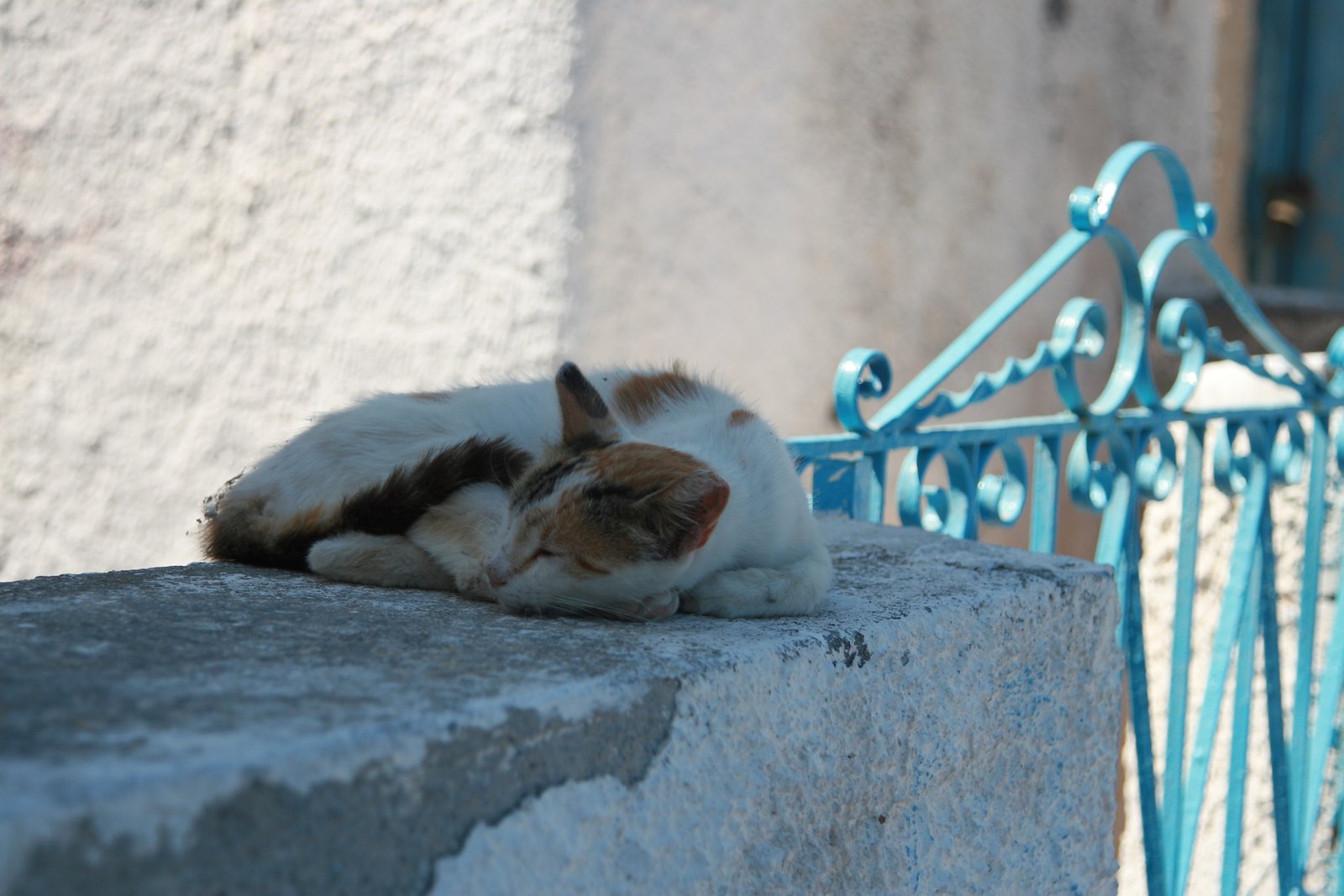 In Santorini we inquired again about renting a scooter – this despite all the warning signs that this was a bad idea (almost everyone we met in Ios had some sort of scooting injury). Sure enough, despite the fact we weren’t allowed in Samos the Santorini rental agency told us since we have a Class 5 Canadian driver’s license and are allowed to drive a 50cc scooter in Canada we are allowed to rent one in Greece. The scooter man asked whether we had experience – to which Jon replied “yes”, of course one day scooting in Laos three years ago counts as experience. Since I wasn’t keen on driving on the busy Santorini roads we had decided to get one scooter that he would drive. After successfully starting the scooter, getting it off it’s kick stand and onto the road Jon took a short spin to get his balance. 3 minutes later he picked me up, we took off around the first corner … with a little too much gusto… and skidded off the scooter onto the road. I crunched my knee, Jon skinned his ankle and we caused 65 euros worth of damage to the bike. Needless to say – scooting wasn’t a great idea. The rental guy also told Jon it was his shortest rental ever. Do not fret, we are in good shape today, thanks to our first aid kit full of polysporin and alcohol rubs.

Today, as I type this in fact, we are FINALLY lying by the beach. Can you believe it is our 12th day in Greece and the first day we are spending on beach chairs on the beach. We picked the most picturesque chairs and umbrellas on Perissa beach, which we don’t even need to pay for as long as we buy a few drinks from the restaurant. It’s amazing. 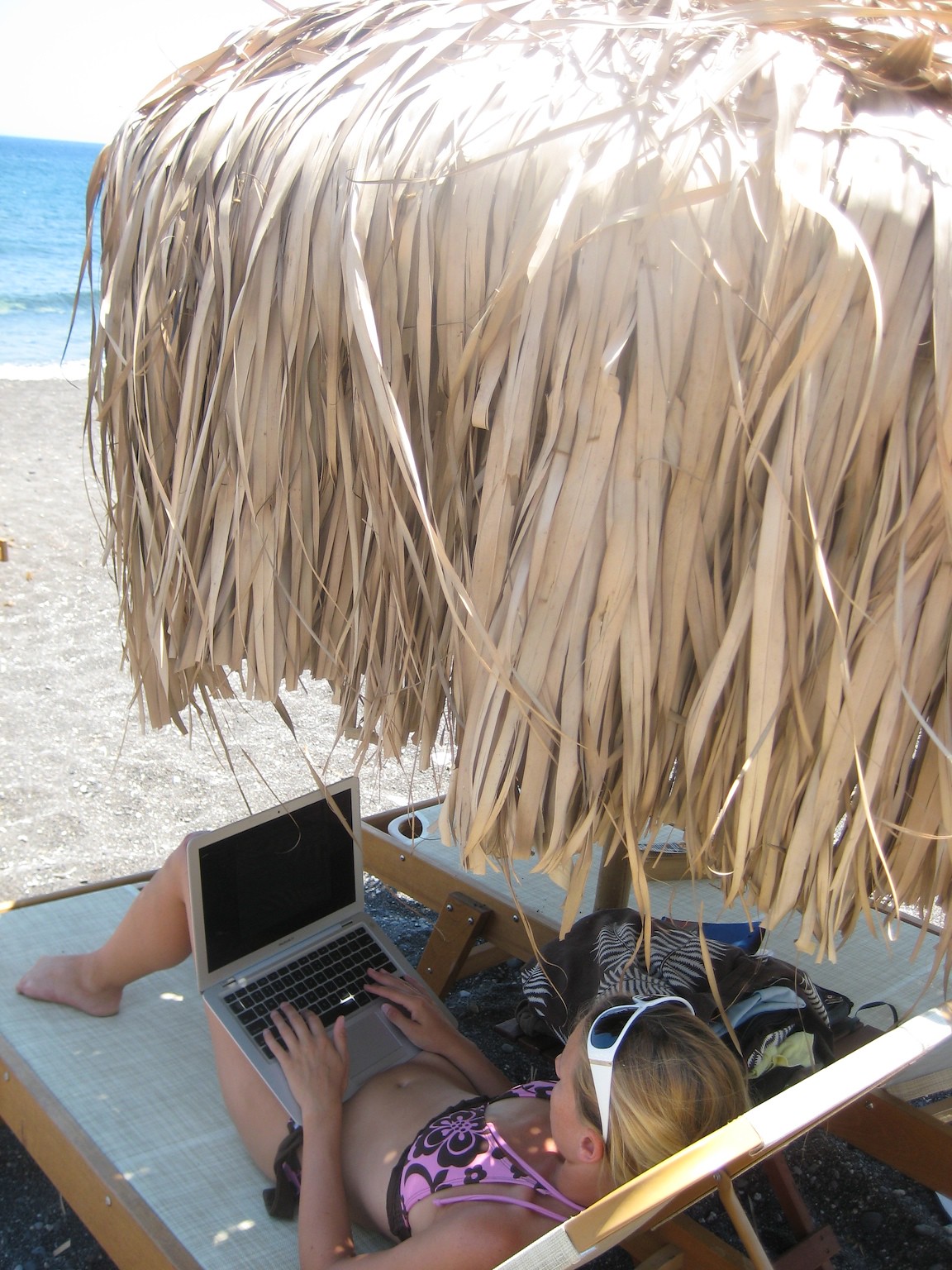