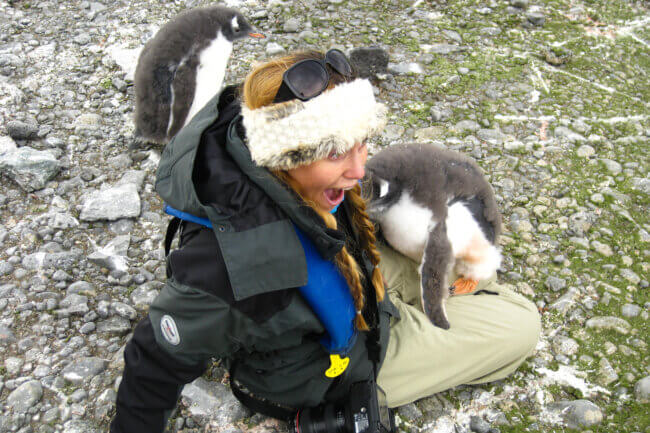 The highlights of our trip to Antarctica included, most certainly, Days 4 and 5. I’ve already told you a bit about Day 4. If you need a bit of a reminder (or if you need to fill your heart with joy), here you go:

But let’s go back, and start from the beginning of the day. Every morning on the M/V Ushuaia, our expedition leader Agustin would wake us with a song, a “Good morning, good morning Antarcticans”, the time, an update on our location, and and update on the weather. On Day 4 we were awoken with the rousing tune of the theme from Back to the Future. Now, you all know how I feel about time travel. But I let it pass this one time for the sheer epic-ness of the tune.

Our first landing on Day 4 was our first continental landing in Antarctica. Overnight we had navigated into the incredibly picturesque Antarctic Sound, and as we emerged from the D Deck and checked out the scenery, dead ahead of the boat was Antarctica itself. We had arrived. It was pretty amazing to get off the zodiac and to actually step onto the continent of Antarctica. And as we disembarked the zodiac, we were met by hundred and hundreds and hundreds of baby gentoo penguins in kindergarten. Once the baby penguins in a colony reach a certain age, most of the parents in the colony go off to feed leaving a handful of parents in charge of what is referred to as “kindergarten”. We couldn’t have timed our trip better. Kindergarten = masses and masses of curious babies and not enough mommies and daddies to keep them in line! After a few minutes of observing the penguins, and having them peck at our snowpants, we were encouraged by the guides to go and do a short hike to observe a snow petrel nest. And while the view was amazing… On our way down from the hike we saw so much awesome stuff including a mommy penguin (or maybe a daddy penguin) feeding her (his) baby. The hubs had his first penguin encounter. (Note: he thinks my choice of words here is epic. Like the back to the future tune.)

And I was clearly excited by all of this. So excited that the hubs had to tell me to take off my crazy face. You can see the attempt, below.

And yes. I did just put that face on the internet. I’ve told you before and I’ll tell you again, I’m all about honesty up in here!

And as we were walking along the beach we noticed our friends Christian and Mark were having some serious moments with the penguins.

So what better to do than to sit down near them, be totally still, and wait for my own moment. And as you know, it was one of the very best moments of my life. And I’m pretty sure you want to see that animated gif again…

We actually have no idea what made the babies more interested in some people than in others. I’m just so thankful that I was one of those people. Thanks so much to our friends Mark & Maaike for the two top images of me. I’m obsessed with them. Talk about a perfect day!

I was very, very loathe to leave that awesome three-hour landing and we (along with our other penguin encounter friends) were on one of the very last zodiacs back to the ship.

And on that zodiac ride we saw the most perfect Antarctic picture. During our (four-course) lunch, we navigated back through the Antarctic Sound to our second landing of the day, Gourdin Island, aka. Penguin City.

Goudin Island is home to Gentoo, Chinstrap and Adelie penguins, but we saw mostly Adelies. At first, I wasn’t sure about this landing. You have to remember how amazing my morning was. So, we arrived at this rocky outcrop where the smell of penguin guano was so intense it took your breath away. And then you didn’t want to inhale again. (Note: The pink is the crap. Gotta love half digested krill.) The wind had picked up. I just wasn’t sure about this place. But boy, was I wrong. We hiked up to mid-island, where the hubs and I sat between 4 colonies and just watched the penguins interact. I don’t know whether others got bored faster than we did, but for the last hour or so, most of the 84 passengers from the boat had gone back to the boat, and other than the penguins it was quiet. The adelies look quite different from gentoos, their a little smaller, a little leaner, a little crazier, and their faces are all black. Oh, and their babies are big black puff balls. We loved watching the Adelies steal (or try to steal) from their neighbours. The video is only about 15 seconds long, watch the guy on the right as he makes an attempt to improve his nest.

And, after yet another three hour landing, it was time to hop on a zodiac and head back to the boat. But not before a few more penguin shots.