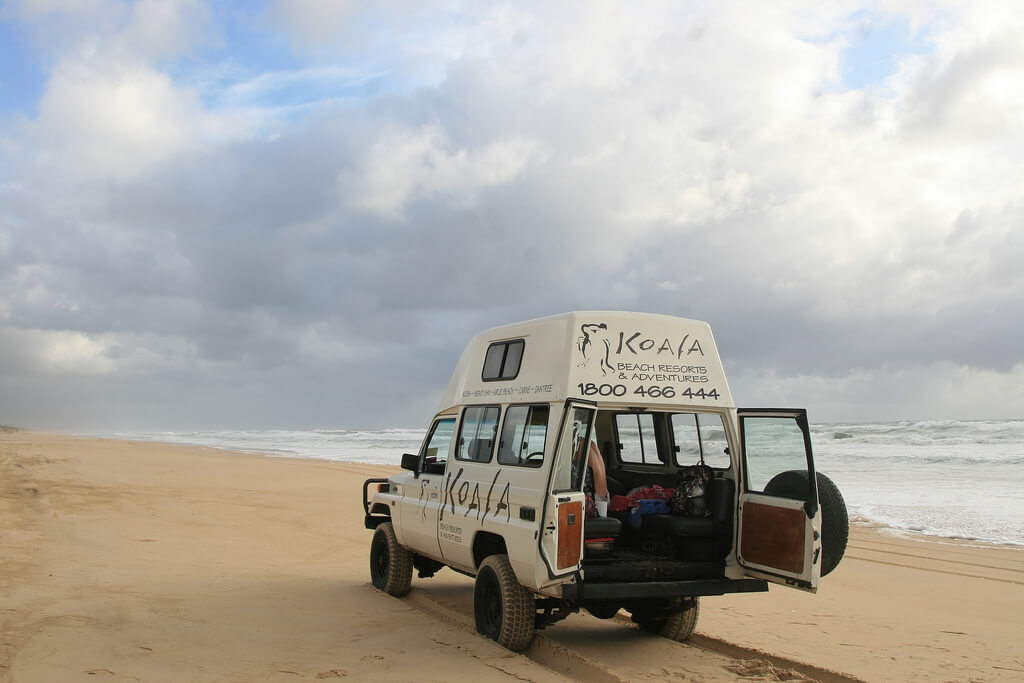 If you are thinking about taking a self drive 4×4 tour to Fraser Island and wondering who to go with, I would think twice about booking through Koala’s Backpackers in Hervey Bay. Our trip was fun – the 4×4 was sketchy but roomy, our fellow travellers were great company and for the most part the provided gear worked (make sure to check your ground sheet for holes before you set off!) – but the staff at Koala’s really are terrible and I would recommend going elsewhere.

Here is the letter of complaint I sent back in January and didn’t ever receive a reply. Not even a ‘Thanks for bringing this to our attention.’

I am writing this letter to express my disappointment with two of my dealings with Koala Adventures Resort in Hervey Bay. First, I am horrified with the unprofessional and prejudice manner of some your staff; second, I am extremely disappointed with a specific interaction with Ben, after departing from the resort.

Dealing with the three Koala staff on the morning of our departure to Fraser Island, January 3rd, started our tour on a sour note. The morning began with several racist and sexist slurs including “this guy’s black,” and “must have been a Jew.” Comments such as these had all 20+ people feeling incredibly awkward. I believe you would agree with me that this is unacceptable behaviour in any context—but especially when dealing with international clients, such as yours, face-to face. Though I thoroughly enjoyed my time on Fraser Island, I have significant reservations about recommending Koala as a tour operator.

My second disappointment is with regards to Ben and a lost bag. I accidentally left a bag at the resort and failed to notice until reaching the airport in Brisbane. Upon noticing, I immediately called Koala and spoke with Ben on the phone, 7:54 pm January 5th. Ben replied that I would “have to call back tomorrow, I can’t deal with this now.” While this is not exemplary customer service, I complied. After independently researching various options, I determined that Australia Post Express Post service would enable me to receive my bag prior to leaving Australia on January 9th. When I called Ben the next morning, I made it clear that shipping with Express Post was not only the best, but the necessary option given my flight date. I further requested that he call me with the tracking number so I could follow up with Australia Post if required. Ben agreed that this was the best option and he would take care of the shipping right away. He further explained that Koala policy is to collect a credit card number to charge for the cost of postage. Thinking the matter was resolved I waited for a tracking number from Ben, but became concerned several hours later when he had not called back with a tracking number. I followed up and Ben informed me that the package was sent by Express Post and would be paid Cash on Delivery, however no tracking number was issued. When the bag didn’t arrive 2 days later, I called Australia Post and they informed me that it is not possible to ship via Express Post with Cash on Delivery—Express Post must always be paid in advance, and a tracking number is always issued: Ben sent the package in regular post, even though he assured me on the phone that he had not. As a result, my bag did not arrive prior to my departure from Australia and I am now left with no choice but to pay for additional shipping to New Zealand.

While I readily admit that I made a mistake in forgetting my bag, I found a solution to the problem and was assured by Ben that he had shipped Express. His poor decisions and negligent customer service will now cost me several hundred dollars rather than fifty-six.

Needless to say, I am very disappointed with Koala and would not recommend it to others. As part of my year-long trip, I am maintaining an online blog and plan on sharing this experience with others; I am, however, more than happy to include any response you may choose to send.

In case you are interested, we did end up getting the bag – Dan sent it on to Poste Restante in Wellington, New Zealand and we picked it up on January 22nd. The worst part of this was that I did all my hiking on the South Island in crocs, but at least I got my bag eventually. It cost $165. Not a huge price to pay for such a dumb move, but still a heck of a lot more than $56.